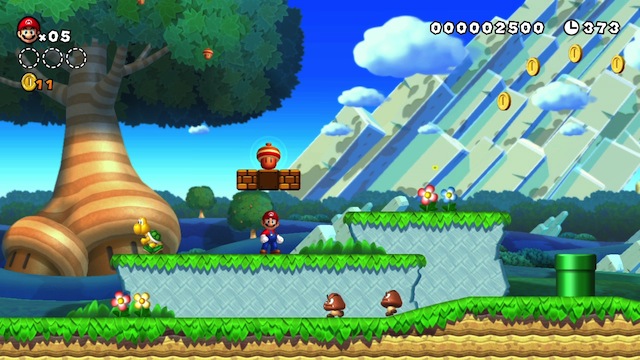 New Super Mario Bros. U is a game where you jump from platform to platform in a prescribed area, avoiding or stomping on enemies, until you fall into a pit or a clock timer runs down or you succeed, reaching the end. Then you start all over again.

“…the earlier masters had preferred to write ‘what oft was thought but ne’er so well expressed’ rather than to be original. Every member of the court was expected to know by heart the poems in the principal Japanese and Chinese anthologies, and a slightly different emphasis given to an old poem would be recognized at once and appreciated as much if not more than a completely new idea.”

-Donald Keene, from Japanese Literature: An Introduction for Western Readers

New Super Mario Bros. U is the finished product of repeated iterations: the result of starting and finishing the same project, over and again, until each one is slightly better than the next.

But it’s also satisfying in ways the first attempt was not. It shimmers in your vision like a mirage, in and out of opacity, a misremembered lucid dream. It’s both stronger and less interesting that it should be. It confuses you in its capacity for boldness and lazy nostalgia. You know what’s coming, and then you don’t. It’s what you already know, seen for the first time.

NSMBU is like a cup of hot cocoa, your preferred brand, with the water ten degrees hotter than normal and an extra spoon or two of chocolate powder.

NSMBU is like seeing a friend you haven’t seen since high school, but instead of a more wrinkled face and a slight paunch, they look younger, more vibrant. They’ve whitened their teeth to a supernova gleam; they chucked the glasses and had Lasik; muscles, from calf to trapezius, bulge. They look good—perhaps disconcertingly so. Unnatural. You wonder if, instead of spending all that time at the gym, maybe they could’ve learned a new hobby, or practiced an instrument.

NSMBU sounds like your favorite song from childhood, performed by the sons and daughters of the original band members, and though the bass player has chops, the keyboardist lacks his father’s ear for melody or willingness to embrace odd time signatures.

NSMBU is thinking sex happens when two adults hug each other.

NSMBU is a pair of sneakers re-soled by a local cobbler, a profession that doesn’t exist in the same plenitude as before, so you feel lucky to have at least this one shop that does careful, exacting work, perfecting something few take the time to consider or attempt themselves.

NSMBU is a Broadway play reimagining of the same Broadway play, whose audience already bought tickets to and attended the original, but want to see it again because they laughed and smiled the first time, and these feelings are rare enough, so why not laugh and smile some more?

NSMBU is your best Thanksgiving Dinner, that one in 1991 with marshmallow yam casserole and potato-water gravy, turned into a cartoon turkey leg, eaten in small, regenerating bites.

NSMBU is a conversation with passers-by a thousand miles away, quips and phrases frozen in dry ice and sent across the ocean on candy-colored cruise ships.

Take the source material away and the reflection is empty: a sheet of glass, transparent.

NSMBU is the memory of your Junior Prom, blessed by the haze of three five-ounce glasses of red wine, curated by carefully-selected snapshots, heightened by retellings molded to induce unhealthy feelings of envy in your present love interest, who in fact was your date to Junior Prom, a fact you’ve willfully forgotten.

NSMBU is the game of hopscotch you began in 1985, and continues into 2012, and will end at some undisclosed date in the future. That burn in your hamstrings is not the influx of lactic acid, or a rippling of fired nerve endings, or the skin peeling away from your thighs after such an extended period of time under the sun, but a curious mix of awe, disappointment, rapture, and befuddlement at succeeding to play the same game for years and years and years and oh look here’s another set of boxes I shall jump on them and jump and—

NSMBU is a purposeful recreation of beloved, familiar things. We feel comforted by its presence even while we take it for granted. Surely, we miss it when it’s gone. But take the source material away and the reflection is empty: a sheet of glass, transparent. Whereas the first “New” Super Mario game, for the Nintendo DS in 2006, was almost an homage to the original release twenty years prior, the Wii U version has more new ideas. Or at least a larger surface on which to lay out pre-existing ideas in more interesting patterns.

E.g., Right now I am listening to the world map music for Layer Cake Desert, on headphones plugged into the Wii U GamePad controller, whose screen displays the game in full, as it sits in a stand on my desk. I’ve never before been able to play a console game while also working on my computer. Two rooms and several doorways separate the main living room television and my bedroom/office. I can play it there, but also there. Regardless of the game’s contents (which merit detailed attention, but not here—you know enough already), the game becomes different and worthwhile by this near-coincidence alone.

In her 2001 book No Logo, Naomi Klein discusses the consequences of globalization as we consume on a larger and more homogenized scale. “Power,” she writes, “is attained not by collecting assets per se, but by projecting one’s brand idea on to as many surfaces of the culture as possible: the wall of a college, a billboard the size of a skyscraper…” When we play New Super Mario Bros. U, we live in that skyscraper, covered by the projected billboard images of our youth, so that when we look through the window all we see is ourselves, looking younger, looking happier in fact than maybe we were.

Any pattern, repeated often enough, becomes something else. If it is good and pure—Escher’s doves, Cage’s silence, a plumber’s upward momentum—the familiar can become strange, intoxicating. We know this experience. We know how it begins, and we know how it will end. Still: We want to play again.