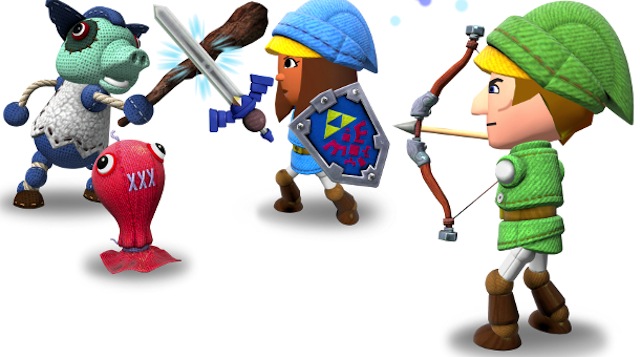 The first time you boot up Nintendo Land, three things happen: a floating screen with arms says hi; you see a version of yourself, too thin and bearded, in lieu of a muscled scowling super-soldier; and your view of the game world sways and shakes, contingent upon the movement of your own hands. All combine to form a stirring, possibly overwhelming, introduction to the Wii U, Nintendo’s first HD console and their next salvo in the war to amuse the already overstimulated masses.

In brief: Nintendo Land is designed as a virtual theme park, with amusements based on twelve revered Nintendo franchises. Each attraction houses its own unique game, a stylized and stripped-down take on a classic, with new and unique goals. And so Mario Chase is not a platformer but a simple game of tag; Donkey Kong Cart Crash is not a race to the top but a slow, pain-staking roll to the bottom, those familiar girders drawn in chalk and beset with obstacles. And in each of these, you play as your Mii character dressed in colorful Nintendo garb.

To many, the game will act as liaison to this new box in their living room. Early adopters forget how confusing a new device can be to the common consumer. We buyers of gadgets and readers of tech-porn dismiss the obtuseness of the simplest inputs: How many still cringe when a parent double-clicks a hyperlink? The path to understanding is only more treacherous when it comes to gaming. For the past eight years, Nintendo has chopped at the dense foliage of buttons and sticks built up over decades with their twin-machetes of touch-screens (DS) and motion control (Wii). This new console combines each in an attempt to serve those playing for years, while allowing safe passage for those curious but uninformed. Far too often the gaming landscape reeks of an eighth-grade dance hall: the Haves over here, the Have-Nots over there. The Wii U presents a middle-ground, a place where long-time players and the newly-anointed can commingle and drink from the same punchbowl. Nintendo Land is their letter of invitation.

Apple’s App Store and Facebook’s social games have introduced many to the power of games, but the gulf between this broader audience and those who’ve played for decades is still deep and wide. Early reports on the Wii U exemplify this: Reporters complain about load-times for running apps from the Wii U home screen; my mom bought an iPhone last year and still barely knows what an app is.  That’s why Nintendo Land’s Monita is so important.

With the Wii U, Nintendo realized their GamePad, a controller with an imbedded 6.2” touchscreen, would prove to be much less accessible than the simplicity of the Wii’s Remote. Nintendo Land requires a guide into this new playable territory. Monita is your digital Sherpa. Hers is the first voice to welcome you. She teaches you how to move forward. Also, she is a screen.

(And though she is a screen, which to my knowledge does not possess sexual organs or an endocrine system, I know she’s a “she,” because her name is Monita.)

That Monita is a personified screen, as opposed to just another avatar telling you what to do, feels odd at first, but soon the choice makes sense. What Monita brings is two-fold: 1) she’s disarming, odd, an attention-getter; and 2) she puts a face to this new device we now hold in our hands.

To Point #2: Imagine you don’t own a tablet or smart device. This big screen in your hands has not yet become an extension of your mind; you are no multi-touch prestidigitator. The flat empty space can be intimidating. How do we manipulate it? Writers understand the fear of a blank page. So, too, might a handheld screen intimidate the new user. Enter Monita. Now the very thing you fear is leading you around, helping you learn the basics. We’re comforted; we move along. Perhaps this argument sounds facile, presumptuous. But on some subconscious level known only to our brainstem, maybe it makes sense. Wii Fit, a $99 bathroom scale with mini-games, sold over 20 million copies. Your guide? A talking bathroom scale.

To Point #1: Pixar has known for a decade (and Disney long before then) that sticking a pair of eyes on most anything results in an automatic and irresistible cuteness. (See: Merchandise sales results of the otherwise mediocre Cars movies.) Of course, the temptation can go terribly wrong. (See: Kinect’s Googly Eyes experiment, an unfun destroyer of joy; Clippy the Paper Clip from Microsoft Office.) Nintendo Land is already full of known franchises and technicolor throwbacks. But newcomers might not know who Captain Falcon is or understand how the heroine of Metroid is actually named Samus and that she’s a lady, not to mention a bounty-hunting bringer of death. Monita is a clean slate, a slightly sarcastic non-entity, a character-less character in a world full of them. Gamers and non-gamers, uncles and nieces, techheads and luddites: We’re all on the same page. More than that, we’re all in the same game, in a way never before seen on a home console.

Nintendo Land is an engaging, nuanced, surprising example of a company riffing on its own history. There is unique opportunity that comes with such rich lineage. A pixelated Link makes sense; he once looked just this way. An 8-bit Master Chief is a fan project, a “What If?” scenario not a part of our shared history. But instead of simply mining their greatest hits, Nintendo subverts them, rearranging past mechanics and inserting the very people that first played these games decades ago: You. Pardon the PoMo, but Land is a very meta-game: a game about games; a game flipped inside out, the inverse of how we normally interact with the game-space and its denizens.

Step one in this interactive origami is how we view the world. Players have seen games from a first-person perspective since 1974’s Maze Wars. But the screen in front of us was always fixed in place. Any camera-control was mere digital nudging, or the slow drag of a right-stick wiggle. As your Mii stands in the main hub of Nintendo Land, you stand in your living room. Rotate your physical body and look at the GamePad screen; your perspective moves with you. Face the opposite direction of your TV and the Pad—your eyes—look behind you. Bring the Pad to the sky and see cardboard clouds revolving on wires. There’s an immediacy of movement, almost to a fault, as the TV view wiggles in syncopation to your own shakiness. Yesterday I drank too much coffee; my running through a virtual theme park was viewed through a rickety, tremulous lens. But it felt like my running, not someone I controlled. This is Step Two.

Players of Nintendo are now Nintendo characters. Barthes would have a field day.

For thirty years, we have sat in our homes and taken control of these characters, inhabiting them in their own unique worlds. Now, Nintendo is dressing its customers in the fanciful skin of its game characters, unleashing players into this real-world setting (a theme park) meant to evoke imagined realms (a cross-stitched Hyrule; a toy-block Mushroom Kingdom). Land switches the conventional relationship between player and character; instead of controlling a puppet we pretend to embody, we are the puppet, dressed in its clothes and borrowing its props—an arm cannon, a flashlight, a sword—as we step into a faked “real” version of the “real” fake world.

We have always felt in control of these animated toys. But now the toys are ourselves. Down the rabbit hole we go.

The Wii U midnight launch in New York City exemplified this shift. The event included a special appearance by Nintendo characters brought to life: A parade of Miis. That is, giant mascot versions of our in-game avatars. Real-life versions of fake real people. Players of Nintendo are now Nintendo characters. Barthes would have a field day.

Miiverse, the new system’s answer to social-networking, takes us one layer further. Online worlds have been populated with real-world counterparts for years. But NPCs are mostly pre-generated, fabricated by the designers, imbued with life by artists and writers. Here, your Nintendo Land plaza swarms with other Miis, each connected to a player down the street or across the globe, each spouting a typed or drawn message: a greeting, a hint, a drawing of a raging Pikachu or a docile Yoshi. You interact with these mannequins superficially in the game-world; but tap a button and you can continue the conversation through a series of handwritten comments. Now even the townspeople are created by its inhabitants. The game itself, sweet and addictive, is but a jar of honey; underneath, a hive buzzes. We roam there together, absorbing the collective wisdom of our excitable peers.

Nintendo has been building this new reality for the past three decades. We’ve been visitors without even knowing it was there. The company survives on the passion of its fans, an enthusiasm seeded so early that we barely question its existence. Playing Nintendo Land, we glimpse behind the curtain of their glorious machine and see ourselves, manipulated and rosy-cheeked, running after something that won’t turn around. I’d be upset—that dread awareness that comes with such invasion—if it all wasn’t so much fun.