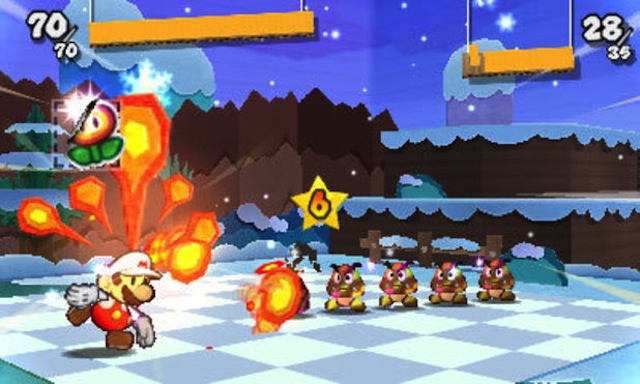 Reviewers like to put things in boxes. This is a comedy. That is a drama. When neither term fits, or rather both do, we mash them together and make a bigger box: behold, the dramedy.

And so it is with Paper Mario: Sticker Star. Some expect a role-playing game. “But there’s no leveling up!” Well, it’s kind of a platformer. “But you barely jump off the ground!” Actually, it’s more of an adventure game with puzzles. “But there’s no story!”

The beauty of this game is its willingness to shed such labels. Nintendo and Intelligent Systems have given us a game that didn’t quite exist before: in which stickers you peel from a papercraft environment become your attacks in turn-based battles; in which you find real-world objects, absurd in their dimensionality, only to turn them into stickers so that they make sense in this nonsensical place; in which the ultimate weapon isn’t a bomb or a gun but a hungry goat.

Any good game, or film, or book, actively teaches you the grammar of its language. As you play/watch/read, you learn how to play/watch/read some more, gaining a stronger foothold in this new universe one minute/scene/page at a time. I remember the first time I read Anthony Burgess’ A Clockwork Orange. The first thirty pages were spent wading through an undecipherable mess of sounds, made-up words describing real-life things, their pre-existing labels curiously ignored by protagonist and author alike. But soon my gulliver made sense of all that kroovy. I’d lived in that world and, by doing so, knew how that world lived.

The same teaching occurs with each new interactive realm. Some resemble our own; others consciously avoid reality. As games’ fidelity continues its march toward photorealism, it’s gratifying to see developers resist the temptation to simply mimic, or mock, when they could invent.

One of the key mechanics in Sticker Star could be seen as poking fun of this attempt at “realistic” graphics. Amongst the pop-up book villages and origami dungeons you may stumble upon something that looks out of place—an everyday object, rendered not as a paper facsimile but a three-dimensional version of itself. So you find such compelling items as a roll of tape, or a space heater, or a faucet handle. Really dig and you may discover even more elusive treasures: a dented aluminum can, say, or a pile of shaved ice. These objects are necessary to moving through the game—many puzzles can’t be solved, or bosses can’t be defeated, without a specific item. But they are usable only if turned into a sticker. As real-world objects, they are labeled mere “things” and take up space. Once transmogrified into this abstract, flattened version of itself, the object can become something more than it once was: the Faucet Handle turns and fills a dried-up oasis; the Tape covers a vent of poison gas.

The developers were probably just having fun with the visual juxtaposition, and in fact say as much in a Q+A round-table discussion of the game. Yet I can’t help but think this was a sly jab at all those number-crunching creators squeezing as much as they can out of some over-heating machine, only to make something that looks like the real world. One day, when we look back and forth between screen and reality and can no longer tell the difference, this will be a technical feat. But don’t we see the every-day, well, every day? I want to try the never-before. The world is filled with enough Things already.

One clever touch further blurs the line between real and make-believe. Your sticker collection is visible on the 3DS’s bottom touch-screen, and certain powerful stickers turn iridescent. I thought they sparkled at regularly programmed intervals, until I paid closer attention. I tilted the screen up and a line of reflected light shimmered across my Fancy Hammer sticker. I tilted the system back and the play of light followed my motion, keeping pace with every gesture, a trick employing the hardware’s built-in gyroscope. Your stickers shine as real-world versions would if stuck on real paper. After this discovery, half my playtime was spent manipulating and twitching the handheld up and down, watching each resultant shimmer, this physical object in my hands not only the domain of play but now a toy itself.

But don’t we see the every-day, well, every day? I want to try the never-before.

This same attention to detail is required to advance through the story itself. Time and again, Nintendo layers a candy shell veneer over a game chockfull of challenging secrets. An early stage proves impassable due to a pesky sand tornado. There’s a spot for a sticker—it’s up to you to find the right one. (I won’t spoil the solution here, but only after a lucky guess did I notice a rock nearby with two parallel markings, almost as if they were an outlet for a plug…) After an hour of fruitless searching, I finally broke through the impasse. The eventual payoff isn’t money, or added abilities, but the sight of Toad, floating on an inner tube, sipping a fruit cocktail, shades blocking the sun. I’m sweating with frustration; the sentient mushroom tells me to “mellow out.”

There’s a near-tangible sense of mischief in everything from the environments to the puzzles to the writing. While the characters are the same humdrum companions you’ve stomped on and jumped over for decades, undiscovered personalities unfold through distinctive, quirky dialogue. Another Toad overlooks an island covered in poison, a pirate ship crumbling over the rocks. He waxes poetic on the difficult path ahead: “…But the shipwreck that decorates the island like a skeleton’s jewelry whispers a grim warning in your ear.” When I read this I laughed, not only because it was bad, but because it was meant to be bad, or at least overwrought, or melodramatic. The game consistently introduces surprises, whether these are starry-eyed characters with a silly tongue or sight gags playing off expectation.

Elsewhere in the desert, you hear muted guitar behind the door of an upright coffin. Slide the lid open and there he is, a Mariachi Shy Guy, strumming. Attack him or don’t – he’s not the aggressor here. He’s just playing his jam. He’s there only to teach you: Poke around. Explore. This is a clue to your future progression, but also a simple curiosity to stumble upon for its own sake. Much of this game is just that—a joke or moment that elicits either wonder or bemusement or a stifled laugh, something you haven’t seen before or thought of. I never knew I wanted a game to feature a hidden grove of trees that resemble ten bowling pins—looks like I need to find the ball, but where is it?—but now I know. This is why I love videogames, and why they’re important: They give us what we could never have otherwise, or never knew we wanted in the first place. There’s probably a word for such a thing. If not, I’ll invent a new one. Maybe it’ll stick.