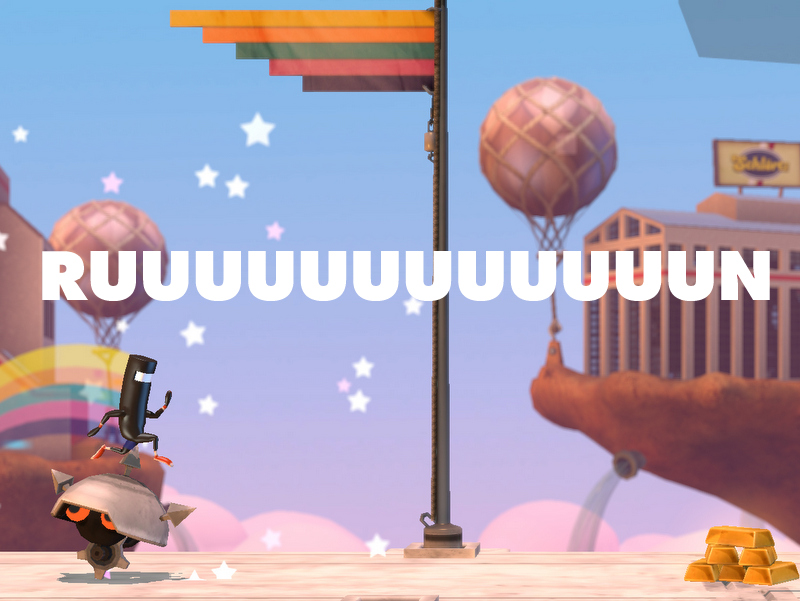 The title itself lets you in on the joke.

BIT.TRIP presents… Runner2: Future Legend of Rhythm Alien is less a name than it is a test. Are you, the player, willing to brave these untenable waters? Dare you enter such challenging terrain? The title, its very marker of existence, is a confused minefield of potential, a question mark in a line-up of exclamation points. By playing Runner2, you acknowledge that yes, you are ready. Even if you don’t know what exactly awaits you on the other side. Even if it hurts.

Runner2 both expands and constricts the scope of Gaijin Games’ BIT.TRIP series, originating on WiiWare and expanding onto iOS and Steam. Each entry focused on a different mechanic taken from gaming’s history: The first, BIT.TRIP BEAT, took the reflecting paddle of PONG and laced it with angel dust, giving players three entrancing, skull-pounding levels of horizontal dots flying at your meager vertical bar. Your task? Bounce them back. Each successful hit added a note to the music. Succeed enough and the music became richer, adding layers and bass previously absent, along with more frenetic visuals, distracting you into submission. It was the introduction to an old-school team full of twisted values and dark humor. Runner2 takes the most popular entry of the series and pumps fresh blood into every vein, the better to show the bruises. Gaijin Games wants to punish us and we love them for it.

Videogames are one of the few mediums where suffering is considered a feature. To terrorize the player of your game is to give them what they want. They create a safe space for self-appointed abuse, permissible because the damage is localized. All scarring is internal; you feel the pain in your psyche and your thumbs, yet still you forge on. Runner2 exemplifies the gleaming underbelly of masochism found in such difficult games. On the surface, they should inspire nothing but increased blood pressure and a questionable pursuit of virtual progress. But we want to be challenged. We like to be pushed, if only to push back.

Videogames are one of the few mediums where suffering is considered a feature.

BIT.TRIP RUNNER established the template its sequel maintains. The fourth entry in the original series, with a shot of inspiration from Activision’s Pitfall, it broke up Canabalt‘s endless scrolling into an escalating sequence of mini-challenges. All you could do was jump, kick, and block; you ran and ran through sine waves of garbage and electro-vibrant trees, your character a blocky all-black avatar of interactivity itself. Its name, Commander Video, harkens back to the origin of video games, when Mario was called Jumpman and backstories were primal quests for food, treasure, or love. With its follow-up, yearning to stretch artist Mike Roush’s talents, Gaijin Games decided to move past the original’s Atari-esque aesthetic and give the Commander something more befitting the 21st century: rounded edges.

Runner2 lives in a world of curves. Everything looks buoyant and stretched; you run not through the kaleidoscopic acid trip of the original but a subdued, vaguely ominous vision of the future as seen through the wrong end of a Coke bottle. Mountains in the background smile wantonly; giant floating barrels peer at you through beady eyes, casting judgement. The action remains much the same: Again you must run and jump and kick, but whereas in the original you felt as if you were moving towards some elusive goal, here your momentum feels like the product of escape, an inertia borne of fear. This time you’re running away from something unseen, ever-pursuant, just off the edge of the screen.

And though the challenge remains diamond-hard, the overall vibe exudes frivolity. Every obstacle blocks your way with a half-wink and a smile. Forks in the road offer easy ways out or tests of skill: Choose the trickier path to unlock extra characters and outfits, each sillier than the next, so that even as you, the player, squeezes your controller into broken plastic, your avatar on-screen flits about with a dummy nose and an arrow through his head. I found Uncle Dill, an anthropomorphic pickle, a welcome alternative to the Commander’s all-black business attire. But woe to Reverse Merman, with his fish-head and skinny pale legs and scrotal fortitude: such an accident of nature deserved better than this sisyphean nightmare.

The whimsy and joy that ooze from every detail does little to numb the ache; in fact, the sheer delight magnifies the pain of moving forward. In a glum setting, with a deadly serious protagonist, obstacles are expected. Our daily life is a grind and its inherent mundanity the seal of approval. Runner2 creates something else, a fantastic contradiction: A world full of love that nonetheless hates you for being there. How else to explain all the traps? And yet we enjoy shoving through the ecstatic gauntlet.

Runner2 could never be mistaken for the homogenized product of focus testing. It bears the stamp of its creators’ enthusiasms, for ill and good. For this I pay it my highest respects. In lieu of exploring the latest virtual facsimile of our world,  I shall run from left to right, over and again, because sometimes two dimensions are better than three, and a jogging pickle is better than another schmoe itching to save the world.