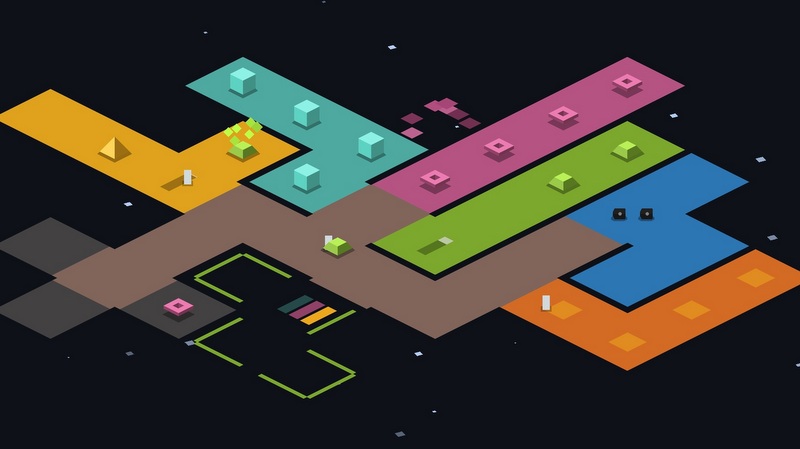 My little three pixel minion, reduced by incoming fire to two pixels, one, finally none, lets out a high-pitched scream as it gives up the ghost. That little squeal fills me with a tinge of guilt. I mistake it at first for indigestion, the part of my soul capable for feeling remorse for my beloved units having long since atrophied, but the strange tingle of shame is hard to deny.

Out of all the real time strategy games I’ve played, and all the various units I’ve sent to their deaths, this is the game that gets to me? Rymdkapsel (Swedish for “space capsule”) is a minimalist strategy game created by two Swedes: music and sound by Niklas Ström and everything else by Martin Jonasson (alias: Grapefrukt). All the graphics are simple shapes, and the core of the game revolves around placing tetrominoes color-coded by function—brown blocks for the corridors which connect everything, magenta for resource collection, orange for food, blue for defense, etc.— and telling your minions, little white bars made out of a few pixels, what tasks they should pursue.

Their work is periodically interrupted by honking klaxons and the ever-increasing red triangle fighter jets of the enemy; if all of your minions get zapped, it’s game over. Instead of controlling the minions directly, you simply give them tasks, like construction, defense or food service, and they do their best to figure it out. There’s no way to interact with one’s minions directly, so why do I feel responsible for them?

I tend to be a fairly cold-hearted son of a bitch.

I tend to be a fairly cold-hearted son of a bitch, especially when it comes to civilians or workers. Show me an idyllic patchwork of farmland with a merry bunch of villagers tilling and so forth, or a hearty cluster of peons pulling ore out of some grubby mine and I will slaughter each and every one of them, burn their village to the ground, and blow their mine up with dynamite in the name of victory. I’m scarcely kinder to my own workforce, routinely sending John Q. Villager strolling casually to his gratuitous death via the approaching enemy horde to get a better look at what I’m up against. After a long game, when the terrain is strip-mined of all available use, I typically gather up the former back-bone of my game economy and send them hopelessly charging into the enemy line on the off chance that they might blunt my opponent’s swords a bit.

But those little white stacks of pixels? I am engrossed. Jonasson is certainly capable of more visually evocative models (the squealing puffballs that alternate between a dazed smile and a trembling slack-jawed terror of In One Piece; the eponymous monocular hero of Glorg, the hybrid Jesus/car things in Jesus v. Dinosaurs). Like the rest of Rymdkapsel, the minions thrive on the abstract—the meditative pace of the game and its droney Zen soundtrack gives the player plenty of time to imagine whatever she wants about the creatures as they go about their jobs.

It also doesn’t hurt that Jonasson has turned the typical strategy “tech tree” on its head. The conventional approach is to put workers at the bottom and make them instantly accessible. They’re almost always the first thing a player can produce. In Rymdkapsel, they’re likely the last phase of build-up. Until they arrive at a weapons platform, they’re also totally defenseless, though they kick a fair amount of ass with blasters in hand.

When they don’t have anything to do, they simply lie down like exhausted dogs, not even retiring to their quarters, oblivious even to incoming laser fire.

When they don’t have anything to do, they simply lie down like exhausted dogs, not even retiring to their quarters, oblivious even to incoming laser fire. They’re really pitiful, doomed little fellows just doing what they’re told. The lack of direct control made the orders I gave feel grave. If a few of my minions were trapped in a long corridor, being pounded mercilessly on the way to pick up their guns, it felt distinctly like my fault for not giving the order sooner.

Rymdkapsel has a much slower pace than many strategy games, but it can be unforgiving; it’s entirely possible to get stuck due to poor resource planning, and one incoming attack with your minions in a bad place is likely the end of your space colony. My only complaint is that I can’t see through my fingertips, and placing squares in puzzle-like fashion can be a little difficult, especially with the dual-sticks and buttons of the Vita glaring up at me.

It took me about two and a half hours to complete the three missions given by the game (more missions and levels please, Grapefrukt!); a fairly successful playthrough takes a little more than an hour. Whether you’re a seasoned Starcraft player who’s tired of clicking hundreds of times a minute, or a neophyte untutored in the ways of the truly gosu, Rymdkapsel offers a different vantage point on the core mechanics of real time strategy and replaces the frantic clicking with forethought and crisp, abstract style.