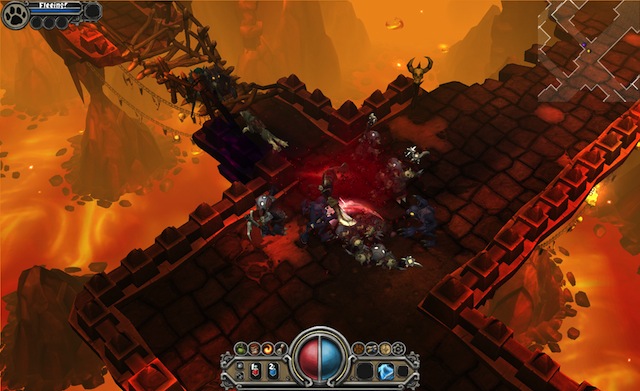 I am worried about the story. I have been playing for some hours now–and I don’t really know how many, maybe four, maybe sixteen; Steam’s clock is confused–and I don’t think I know what is going on.

I feel guilty about this, mind you. I feel like I am being a poor gamer, or a poor reader, or both; Torchlight II’s quest and storytelling system is functionally identical to that of World of Warcraft, in that it involves for the most part

1. Clicking on a person with an exclamation point above their head

2. Killing something, often in a dungeon, and

3. Clicking on a person with a question mark above their head.

Because the game’s action doesn’t pause during these moments, at this point my ability to understand the story depends largely on the store of patience I have for reading text while being battered by zombies. Which is limited.

I end up back at my corpse only after my wanderings have brought me around again. Because there’s always somewhere new to go.

I am in a desert, bleak, dismal, and new to me. Every few feet a dessicated body peeks up from the blasted sand and, if it is in the mood, assaults me. This place is new. The corpses are new. The tribal lizardpeople are new. The enormous rock golems are new.[2] As I move I see more space unfurl itself on my minimap, and I push to its boundaries, wanting whatever is there.

I am worried about the story because I am halfway through Act II, and I feel like that’s what games are supposed to be about–stories, that is–and that there is one here, but that I keep ignoring it in favor of moving forward, moving on, pushing somewhere new. The yellow question mark on my minimap–symbolizing the next story-advancing quest–is floating above some staircase to some dungeon. I’ve been to the top, but I won’t go in, because off in the grey haze surrounding my minimap, there is more, and I don’t want to leave it behind.

In one corner of the Ossean Wastes I stumble on an empty tower. It is partly ruined, and there is no way in. Later, I rescue a man from a trio of furious nomads. He asks for further help, and look: there are stairs in the empty tower, and I find another place to lose myself in.

When I win clear of the tower and stumble back into the Wastes, they are new again, too. I fight an enormous armadillo next to a hulking stone skull. I notice the skull’s eye holds a yellow gem, and I realize that I fought a different battle there not long ago. In my absence, the armadillo has taken up residence, and soon, some new life will settle in the shade of its remains.

From time to time, I run out of inventory space, and I send my pet–a wild-eyed cross between Mushu and Donkey–back to town to do my shopping. Myself, I go back but rarely. When I die, I usually start back in town–cheaper than on-the-spot resurrection–but I end up back at my corpse only after my wanderings have brought me around again. Because there’s always somewhere new to go.

I assume, somewhere in the reaches of the dungeon beneath the gold question mark, the Guardian of Mana is waiting for me, and I hope whatever is badgering it is not doing so with too much malice. I will get to it eventually. But not until I see what more there is, in the shadows, in the secret places, here in this landscape that is Torchlight, but not Torchlight, where I am lost, yet again.

1. Okay. They’re not Pokémon, but they mayas well be. What they are is Guardians of the Elements, although from what, I’m not sure. (How can one endanger air? Threaten to pollute?)

2. Well. They look a bit like Gorignak.There are only so many things a rock golem can look like.