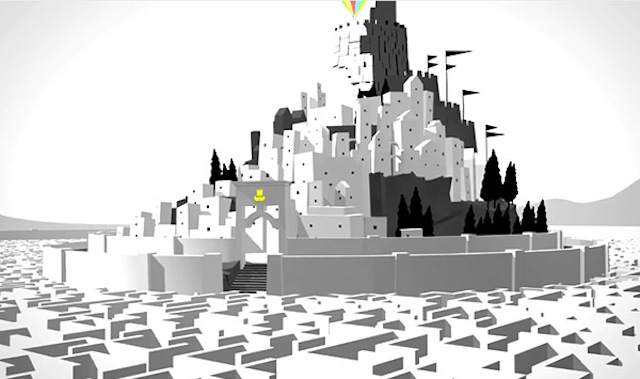 The king was young, arrogant and amazingly talented. He was convinced no color existed that was good enough for his garden so he left it white.

In 2008, a young developer named Ian Dallas released a tech demo for a project called “The Unfinished Swan.” The title, in the manner of new indie auteur set, was a bit of pretentious chest-puffing. Still, Dallas’ demonstration was and perhaps still is the best suggestion of things to come that I had ever seen. The setting was stark white with an ambient background. Dots of paint appeared and the white ground became black with splatter. The character walked and shot before the scene inverts: a night scene becomes illuminated with the shots of white paint.

The demo was a very effective business card.

From there, The Unfinished Swan took flight and Dallas brought the title to Sony’s Santa Monica office where he and his fledgling studio, Giant Sparrow, incubated for the next few years. They tweaked, tuned, and tamed the game into its current incarnation, which will be released at the end of this month.

The game’s story is a fairy tale: an orphan finds that the object of his deceased mother’s painting, an unfinished swan (natch), has somehow escaped into the night. There is, conveniently, a door to an alternate reality, a dreamscape, and we are then told, via placards lining the halls along the way, of a king so enraptured by his own creation that he has become sequestered after losing control of his kingdom.

The trappings of The Unfinished Swan are, quite simply, for kids: the pat explanations for the king’s behavior, the light-hearted voiceover, the Shel Silverstein-light doodlings that outline the story, the literal storybook as a menu screen. Unlike some works of popular “children’s” fare like Roald Dahl or Dr. Seuss, Swan doesn’t at first appear to work on different levels. It’s all quite straightforward.

In fact, The Unfinished Swan is a reminder of the promise of youth, when the world is much simpler and the messy complications of adulthood only await. It’s the job of grown-ups to wield controllers and messy the walls.

I agree with Tom, but what’s fascinating about The Unfinished Swan is the form that Dallas has chosen to tell his story: the first-person shooter. Because at its very heart, The Unfinished Swan is a kissing cousin to Black Ops. They share the same DNA — you shoot things — but are as distant as Brad Pitt and Barack Obama, who, you’ll remember, share an ancestor.

For a generation who grew up on games, the FPS is merely one arrow in the quiver. Surprise, surprise: it’s called literacy.

That Dallas chose an FPS to tell a children’s story is indicative of his relative age in relation to the history of games. For previous generations of game designers, choosing a clone was the easiest way to build upon an established success, but it also preyed on gamers’ aversion to novelty. This cycle — hit, franchise, clone — has metasticized into our current innovation-starved predicament. (As I’m fond of noting, the only industry with more sequels than games is pornography. Final Fantasy XXX, anyone?) But for a generation who grew up on games, for those who are as familiar with the conventions of gaming as they are the conventions of pop music or comic books, the FPS is merely one arrow in the quiver. Surprise, surprise: it’s called literacy.

What I’m saying is that it would be as natural for Dallas, a Yale-educated comedy writer with credits at the Onion and Comedy Central, to take the erudite approach to the FPS as it would be for a French director to play with the conventions of a black-and-white musical. Some critics may present The Unfinished Swan as an antidote for the common shooter, but I’m suggesting the opposite. Without Doom and Counter-Strike, there is no Unfinished Swan. For Dallas’ game to toy with FPS conventions, there has to be a common language for *everyone* to understand. The shooter is the closest we have to the musical or the romantic comedy in terms of a universally-understood gaming trope.

Dallas’ apparent enthusiasm for the genre serves smartly as aproxy for conversations about architecture and design. On that count, Swan stands as a paragon of visual excellence and Ikea catalog-wielding Swedophiles would be right to appreciate the game’s clean lines, profuse whiteness, and exhaustive use of space. There is a particularly arresting sequence in the back third of the game as you stumble upon the site of the nursery the king built for his pregnant wife and unborn child. An architectural diagram of the house is shown in the corner of an unlit room, radiating sky blue. You peer into the void to the see the plans below, before tumbling directly into the space through the drafting table. The ball splatters that previously illuminated your path now serve to manufacture building blocks, one angle at the time.

That mechanical flourish — the switch of a single action from one behavior to another — should be well-noted by those who want to stuff every conceivable behavior into a single title. Dallas’ focus is laudable. This is game about a boy with a paintbrush who wants to color his world. The Unfinished Swan thrives in simplicity and hardly needs 30 hours to justify its existence. You smell that? It’s called restraint and it is the future of single-player narrative.