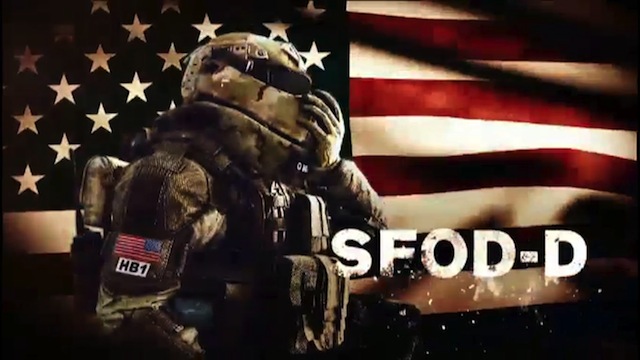 A few months before Electronic Arts stepped into a steaming pile of controversy with its Medal of Honor-branded real-world weaponry, the company faced another brief blip of suspicion in the gaming press. Tom McShea, an editor at Gamespot, had written an editorial criticizing the way that military shooters claimed to be realistic but allowed their players to heal from devastating wounds simply by crouching in a secluded corner and breathing heavily for a few seconds. The next day, EA mustered up Warfighter executive producer Greg Goodrich himself to have a long and frustrating argument with McShea.

Defending his work, Goodrich began by saying “I don’t think you’re gonna find anybody that’s more thankful, and more reverential about the act of service and sacrifice.”

I have no way of knowing if any deeper changes went into the game’s script or gameplay following this kerfuffle, but the entire game feels like that moment of awkwardly smothering patriotism—the defensive impulse to prove just how much you love your country by showing how awesome its military is. The rhetorical nonsense we were all hoping would vanish along with George Bush The Second.

Everything about the game clamors to tell you just how real it’s supposed to be. “It is inspired by real people, real places and real operations,” an EA representative told me in an email several months ago. Yet in the next sentence, he added that it was ultimately “historic fiction,” a “work of entertainment” whose “themes, scenarios and battles are a sensitive subject and may stir conversation among press and players.”

And so we have a training mission set in a mock-up of a plane you’re meant to hijack.

This is the only moment in the game when I play as an actual Arab person, speaking to other Arab people, instead of simply shooting at them. A few hours later in the campaign when I’m back comfortably shooting at terrorists, one of my squadmates yells, “These guys are thinking, I don’t like that!”

All of this, including the Warfighter branded weaponry itself, was done with “the best intentions,” EA’s PR team assured me. But something that the oppressively somber pretentions of Warfighter can’t seem to fathom is that realism is different than reverence.  Patriotism is not the same thing as bellicose jingoism. Yet all the game does to show the possible hand-wringing of moral anguish is a few overcast scenes of some sombre dudes sitting with their wives and children.

But even then, Warfighter fails at its own mission to illustrate just how brave these men are. In one particularly overwrought cinematic, two of the dudebros sit at a diner with their respective wives. One of their phones starts buzzing, calling them back into the line of duty. The younger wife looks sad. “It’s better to have them happy than have them safe,” her older counterpart says to console her. Apparently, bravery isn’t the real issue here. Nor even is civic duty. These men enjoy what they’re doing. So why would the women have to come and ruin all of this good ultramasculine fun? Soon enough, it’s back to the bombed-out city-scape where they can scream “Thanks, bro!” to one another without feeling guilty in front of their wives.

Warfighter reaches for Black Hawk Down but settles for Time Crisis.

Describing the gameplay of most military shooters is hard since the word “rollercoaster” pops up so often. But even by these standards, Warfighter is on rails. The gameplay smothers you with the same finesse as the story itself, turning your eye in the right direction to make sure you noticed just how awesome that last explosion was and cocking the gun for you to take out yet another round of faceless, turban-shrouded enemies. Enemies are marked with little red dots to make sure you know exactly who to kill at any given moment, and guns are frequently handed off to you to explain precisely how you should kill them as well. During the game’s most spectacular setpieces, I didn’t even feel like I was playing at all.

For a game that celebrates its own realism so often, you would think that it would respect its players enough to let them make at least some of their own choices to either interpret the story or play the game as they see fit. XCOM: Enemy Unknown made a more interesting point about the tense and difficult experience of military leadership than this game ever could, and its narrative involved bug-eyed aliens attacking from outer space. Warfighter, in contrast, reaches for Black Hawk Down but settles for Time Crisis.

Strangely enough, the purest moments in Medal of Honor didn’t involve shooting at all. Instead, they put you behind the seat of a car and asked you to drive. In a wonderful move, the camera stays fixed in the same perspective of the first-person shooter, a vantage point that suddenly leaves you feeling small and vulnerable. The car bumps and shakes. The engine mutters anxiously as you hide in a darkened parking lot hoping security won’t find you. When they do, you are swarmed by armed and angry men and given no opportunity to hide behind a wall and breathe heavily until the problem goes away.

For a moment, I was actually afraid. But then the game opened the door for me, handed me another gun, and patted me on the back. Go be a Warfighter, it said. Go be an American hero.