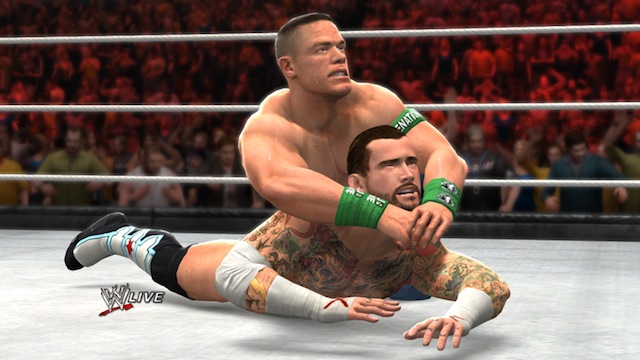 I would love to tell you what happens after the New Age Outlaws/Road Warriors match in the Attitude Era mode of WWE 13, but I have no idea. See, to win that match, and to continue the back-in-the-day storyline that serves as one of the game’s main selling points, you need to complete some complicated barn-dance involving a referee distraction and a tag-team title belt shoved directly into Hawk’s skull, all so that your video-game match can line up perfectly with a real-life late-90s match that I don’t remember.

And to do that, you have to run. But I haven’t used my Xbox controller as anything but a DVD-player clicker in the past three or four years. And somewhere during that expanse of time, my dog got ahold of the controller and used it as a clicker. Other than the joysticks being reduced to sad nubs, the controller is mostly OK, but that top-left button, the one you use to run, is just gone. So I don’t know what happens after that. I only know that I haven’t been able to unlock Ken Shamrock or Vader, and this irritates me to no end.

This is the lot of someone attempting to review a video-game post-fatherhood, someone who used to love button-mashing but who can’t find the goddam time to do it anymore. I haven’t played a single second of Red Dead Redemption or Arkham City, even though I have all the necessary equipment and even though I want to, badly. Now that I have two kids and a full-time job and all the other boring grown-up responsibilities that you definitely do not want to read about, I have to make cold and harsh decisions about my scant available kicking-it time, and the prospect of failing a frustrating mission 15 times in a row suddenly becomes way less enticing.

So: Sorry, video games. You went up against cheap canned beer and Happy Endings, and you lost.

Theoretically, the one place where video games could work in my life is in concentrated little 15-minute bursts, not in expansive full-immersion environments where you find challenges hidden behind attic boxes and shit. We’ve all seen the thinkpieces about how video games are for grown-ups now, too, but these games’ endless unspooling storylines have effectively frozen out entire tribes of grown-ups. But there’s always room for quick-fix button-mashers, and pro-wrestling video games have always served that function beautifully for me.

Once upon a time, WWE 13 publishers THQ put out Super Nintendo’s Road to Wrestlemania and No Mercy games, the general-consensus greatest wrestling video games ever. Those games were so intuitive and smart with their in-ring mechanics, and they made wrestling make sense; you could pound away at an opponent’s arm for 15 minutes and then win via armbar, or you could get lucky with a bunch of power moves in a row and win via finisher. Chris Jericho’s taunts looked great, you could grab chairs from the crowd, and you’d even bleed from the forehead in the way that only pro wrestlers do. THQ eventually used a modified version of that same engine to animate hilarious, impossible moves in Def Jam: Vendetta, and it was glorious. I trust these guys.

WWE 13 has a system that makes almost as much sense, and it’s built around the same kind of grapple-plus-taunt mechanics. The wrestlers’ movements are fluid, and they seem to fit what their actual real-life counterparts would do. There’s a lot more hold-reversing than I’ve seen in any older wrestling games, but that’s easy enough to get used to. The graphics themselves are still sort of endearingly crappy; they just apply now to polygonal Daniel Bryan rather than polygonal Taka Michinoku. In falls-count-anywhere matches, you can smash your opponent through the guardrail between you and the crowd. It’s fun.

These are dorked-out quibbles, of course, but the game exists entirely for wrestling dorks, so those quibbles matter.

But there are a ton of little things in there that just bug the shit out of me. Back in the Road to Wrestlemania days, the THQ developers knew that 170-pound Rey Mysterio was not going to be lifting 440-pound Big Show up for suplexes; the best you could hope for was an awkward bodyslam. Since then, they’ve somehow forgotten, or Big Show has bones made of helium, or something. When you’re letting the game pick characters, it throws its old Attitude Era guys in with the current roster with no regard for historical continuity. Great WWE wrestlers like Antonio Cesaro, William Regal, Tyson Kidd, and Damien Sandow just aren’t in the game. These are dorked-out quibbles, of course, but the game exists entirely for wrestling dorks, so those quibbles matter.

Of course, the game’s wrestling-dork-friendliest feature is its create-a-wrestler mode, for which the THQ people have secretly made available the likenesses, moves, and signature struts of any number of non-WWE-affiliated wrestlers. That means that, if you’re willing to put in the grueling time to make it work, you can have Austin Aries fighting El Generico for the WWE Championship in a Hell in a Cell match at Wrestlemania, which would be incredible if I had the time to manufacture that scenario. And plenty of people have put in the effort; you can, I think, download their efforts online and put them in your game. But my chewed-up Xbox is not going online anytime soon; I don’t even know how to hook the motherfucker up. So: This probably will not surprise you, but a proper dorkout over this game involves a certain expenditure of time and energy. And if time and energy are not resources you possess in abundance, you might be better off digging No Mercy back out instead.