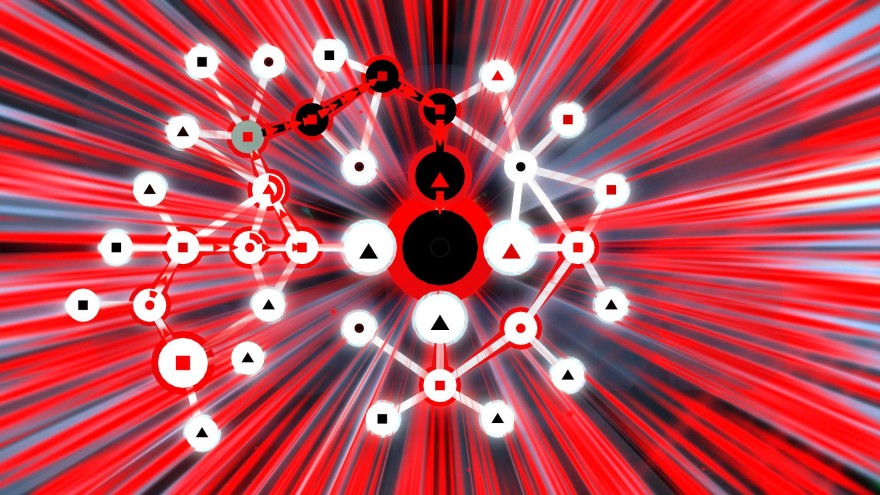 A Low Orbit Ion Cannon isn’t one of the sci-fi guns you can fire at aliens in Destiny. But that title certainly makes it sound like one, doesn’t it? Punch that in chrome lettering on to the hot barrel of a purple pulse rifle and it’d certainly fit right in with that universe.

No, they’re more commonly known as LOIC, and are tools used in network stress testing—to see how a website, program, or computer performs under adverse conditions. So, not quite the weapon of mass destruction that the name promises. But, what if a Low Orbit Ion Cannon (screw that boring initialism, I’m writing it in full) was implanted inside a videogame and pointed at a website?

lets the player send a small DDoS attack to a website of their choice.

That’s the idea that experimental game designer Erlend Grefsrud came up with when looking to work on something that wasn’t his long-term project, Myriad. The result is Killer App. It’s a strategy game that lets the player send a small DDoS attack to a website of their choice. Or, it would have, if Grefsrud didn’t come to his senses, realizing that he could “probably get in a lot of trouble for distributing it.”

His reason for wanting to do this seems to be to demonstrate how game systems can have effects outside of the scope of their software. “I doubt any other art-form can take user input and create material meaning somewhere (anywhere!) in the world in a way determined by the game system but whose meaning is personal and political,” Grefsrud writes.

OK, let’s just back pedal a second to explain how all this would have worked. A DDoS attack, or distributed denial-of-service attack, is an effort to overload a network so that it becomes unavailable. It’s often used to take down websites. In particular, bank websites and those that have payment gateways are targeted by people looking to steal card details, hence why people have been arrested for it. Basically, the target is flooded with requests and/or traffic so that the server becomes overloaded and becomes dysfunctional.

This is what you simulate doing in Killer App. It’s a strategy game about trying to take down a system by overloading it with traffic, essentially. Before Grefsrud removed the function, when succeeding in accomplishing your goal, you were able to specify a URL and send a minor DDoS attack to it. The simulation you played had real consequences, even if it was still, technically, in virtual space.

The tricky bit is overloading that system in the game. You guide “packets,” represented by moving triangles, across a web of nodes towards the center of the system. Reaching the center isn’t so hard, it’s getting enough packets flooding it per second so that it begins to collapse that proves to be the challenge.

This is due to having to consider the effects of the three shapes, one of which is found inside each node: a square, circle, or triangle. Squares double the number of packets they receive when outputting to other nodes. Circles transmit a single packet to each node they’re connected to.

You will be subject to an eye-breaking display.

It’s the triangles that can be a problem. They only pass packets along, not adding any to the stream, and if they are overloaded—receiving more than 10 packets a second—they alert the Cyber Police. When this happens a blackness spreads across your nodes and connections, steadily shutting them down. If this dark entity reaches your starter node then you lose. Luckily, you can halt the Cyber Police in their hunt by closing off connections to nodes higher up, giving them nothing to trace back to you. But that also means you lose that path to the center and make it harder to achieve your goal.

Despite Grefsrud saying that Killer App was a way to “cleanse the palate,” he certainly didn’t let go of the visual distortions and bright colors of Myriad. For evidence of this, and I highly recommend you seek it out if the strategy side of the game proves too much, deliberately get caught by the Cyber Police. You will be subject to an eye-breaking display.

You can download Killer App for free right here. For more information on it, or further instructions, check out its forum thread.