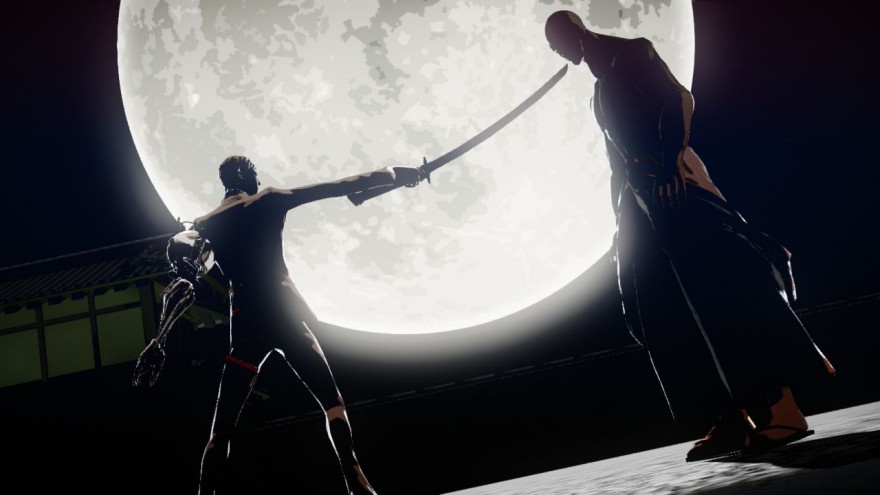 I have just—right now—deleted a draft of this review that began with an extended comparison to the Sex Pistols’ tossed off second album The Great Rock & Roll Swindle. It, like Killer is Dead, seemed almost designed to disappoint. It was a fine paragraph, but ultimately inapt. I have detailed notes for an alternate introduction comparing the game to the work of the filmmaker Seijun Suzuki, who made within a rigid studio system yakuza flicks that boiled over with surrealism, lust and humor. This comparison is also, ultimately, inapt.

The game is a mess, in other words, but it’s its own mess.

The truth is that for all the myriad comparisons Killer is Dead evokes, either overtly or subtly, to Hideki Kamiya, Jack Kirby, Michael Bay, Philip K. Dick, and about a dozen others, Killer is Dead responds to no artistic body so much as Goichi Suda’s own. The game is a mess, in other words, but it’s its own mess. It is a streamlined argument either for, or against, Goichi Suda.

In some ways, it represents a refinement to his style. Suda’s videogames have a noble tradition of anti-player mechanics—the open world of No More Heroes, the control scheme of Killer 7, pretty much everything about Flower, Sun, Rain—and, for awhile, it seems that many of those have been stripped from Killer is Dead. There is no open world to trudge through; we move quickly from lusciously animated cutscene to lusciously animated action sequence and back again. The deliberate mechanical friction that he delights in throwing into the games—the punk he refuses to let die—appears to be dead. I sort of envision playtesters consistently responding negatively to the experience of playing the game, and Suda just nodding and agreeing, such that the game was glossed over almost entirely. It feels, for better or worse, like a really long demo.

But while the mechanical obfuscations may’ve been largely polished over, that energy is not lost. It is subsumed and channeled entirely towards the animation of Suda’s other aesthetic hallmark: that is, balls-out weirdness.

The energy is subsumed and channeled entirely towards the animation of Suda’s other aesthetic hallmark: that is, balls-out weirdness.

It wastes no time in getting to this. Within the first hour or so, the planet earth has grown insufficient for the plot, and so we find ourselves bouncing across the surface of the moon on some errand of revenge. Protagonist Mondo Zappa—I’ll write that again, so we’re clear here—protagonist Mondo Zappa is quick to snark about his role in an action videogame (“You’re supposed to be the boss, right?”). A cutscene is repeated, almost identically, before and after a climactic fight sequence; the very first boss has a trick health bar; the game detours, early and often, from otaku pulp into a pastel field inhabited by obsidian children and a turquoise unicorn. The unicorn was important, as far as I understood things. I did not understand things very far.

Whether or not all of this sounds like a good time to you is probably something you already know. I eat this shit up. Weird is not the most descriptive word, but it is one that I love. There is almost nothing more interesting than something truly and legitimately weird. Like David Lynch or Bjork or the RZA, Suda’s artwork pulses with alien blood and speaks in a language not yet invented. It is an almost essential weirdness. It’s probably the ease with which weirdness turns awry that makes it so precious; when it shades into quirk, or whimsy, or the bizarre, as it does in the work of, say, Miranda July, the Flaming Lips, or Chuck Palahniuk, it shatters the beauty of the truly weird. It becomes an affectation. Killer is Dead walks this line expertly.

This is nowhere as clear as in the game’s “gigolo missions,” in which you ogle various of the game’s female characters and give them gifts in an attempt to have sex with them. This is, obviously, puerile, deeply offensive stuff, worthy of all the disdain that has been thrown at it, but it is also probably the purest expression of Suda’s design aesthetic yet created. It is both very weird—the automatons cycle through a series of unlikely poses and coo bizarre platitudes—and very anti-player—the ogle mechanic is a profound pain in the ass. Like the jobs in No More Heroes, it’s built into the structure of the game; its entire economy is built around trying to get laid. The experience is punctuated with what might be the most absurd sound effect in videogame history, a throaty, celebratory scream bellowed as if from a mountaintop.

This is, obviously, puerile, deeply offensive stuff, but it is also probably the purest expression of Suda’s design aesthetic yet created.

In some ways, this is a bad thing; we need more games that transcend the narrow mores of this culture to tell big, new, daring stories. But we also need some that boil that culture down into a viscous goo, that openly and flagrantly confront us by their very structural decisions, that are as weird as they are ugly. Whether Killer is Dead fulfills that need adequately depends on whether or not you can put up with the mechanics, whether or not Suda’s taste in surrealism appeals to you, and whether or not you’re offended by the deeply offensive gigolo missions. But regardless of this, we need, definitively, more people like Goichi Suda: someone whose ideas keep ricocheting off each other, taking new forms, merging, reacting, gaining speed, heading either someplace new or nowhere at all, but moving fast.