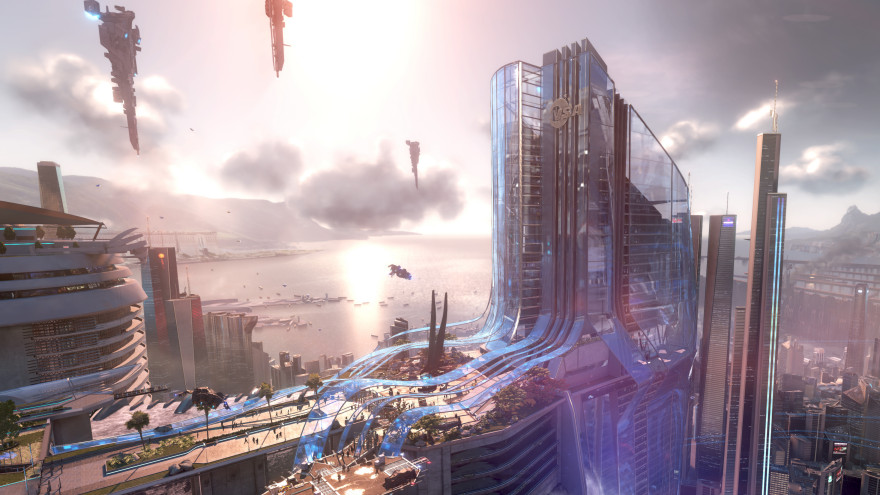 The red lights and blue lights are fighting again in space. They are lighting up the forest zone, the downtown zone, the slum zone. They are re-zoning them for industrial killing use. They are floating in zero G through corridors cast in gold and green. They are chasing a super-weapon that could turn off all the red lights, or all the blue lights, with the flick of a switch. Newcomers to their world may mistake it for a melting plastic Christmas tree.

I’ve divided this article up with ellipses—please imagine when you read them that you’ve been knocked unconscious, like the hero of a military shooter, and regain your senses as you hear the next paragraph spoken by the squadmate who saves your life with an adrenaline shot, or the interrogator who tortures you with an electric baton, or the PR guy who shakes your hand and congratulates you on experiencing the next generation of emotions.

We first see the world of Killzone: Shadow Fall through the eyes of a child, and we continue to see it that way for the rest of the game. Our hero grows a good few feet after the prologue, but his perspective never changes. The game opens in his bedroom, which is covered in military recruitment posters and hardback books with titles like “ISA SOLDIER.” Through Lucas Kellan’s window, we see Helghast soldiers stalking down the street, lining his neighbors up against a wall. The glowing red compound eyes in their skull helmets have never flared so merrily. The inky plating of their armor looks even better in full-size than it does on the Helghast action figure propped up next to the pencils below Lucas’ desk.

Lucas and his father make a break for it in a sequence that doubles as a painfully obvious tutorial. Like a drunk, Kellan Sr. pushes his vast face far too close to yours whenever he talks; it comes as a relief when the moony enormity of it is finally blasted out of frame by Helghast bullets. Lucas gets barely a moment to mourn the loss of the man who taught him how to Press X to vault before the story skips forward more than a decade and leaves this rather unimpressive trauma in the rear-view.

Like a drunk, Kellan Sr. pushes his vast face far too close to yours whenever he talks

In the present, the kid’s neck has telescoped up to adult height, he has learned to carry proper big guns, and he’s earned his stripes as a Shadow Marshal (a term in use since the 2004 Killzone, but still funny today). But the game never establishes a contrast between the fantasy of soldiering seen in the boy’s bedroom and his lived experience of headshots and grenade multi-kills. Scenes of carnage are served up as spectacle, exhibits of new graphical horsepower that makes the little fires in the rubble blaze brighter than anything you’ve seen in a game before. The blood pools are gorgeous. Melee kills feel as neat as punching a ticket—the pliable enemy is gripped, turned, and stabbed so smoothly that his existence seems only an advertisement for the utility of your very shiny knife.

Cutscenes bray about the horrors of war, but we experience combat as an extended light show. I fear Lucas takes it even less seriously; as he races to prevent the total extermination of his people, he often pauses to collect the scattered pieces of a 70-page comic book.

This series has always been about admiring hardware: the spearpoints of ISA Cruisers jabbing through the clouds in the opening scenes of Killzone 2, the endless coils of bullets snaking around the mounted gun on a HAMR IFV, the sky-scraping, spider-legged MAWLR weapon from Killzone 3. Freed from the vile motion blur and gore-caked lenses of the PS3 era, the series’ lust for technology finds beautiful expression in Shadow Fall. Everything glows and sparks, from the hairline LED that runs along the slide of your pistol to the wrist-mounted screens carried by enemy engineers. The warning blood that would fill Sgt. Sevchenko’s fishtank eyeballs in Killzone 2 and 3 is replaced by a red electronic swell. The human element recedes, repackaged as luxury tech.

Lucas shoots his way through no fewer than three different spaceships (the ISA Cassandra and two Helghast spires) in the campaign, and each is an exquisitely machined box of dark metal and neon tubing. In the industrial section of the first spire, lines of standing fluorescents and glowing consoles create quietly stunning bands of color, hot white lights leaning over the orange haze of illuminated glass above an ocean of cool blue Petrusite. (Petrusite is the Killzone version of Imulsion, which is the stuff that the Cole Train runs on.)

There are times when you do feel transported by the sinister and faintly ‘80s dream of technology realized in Shadow Fall’s ships. Sometimes you feel like the game merits the same B+ that Lucas Kellan’s teacher gave the crayon drawing of a tank on his bedroom wall. You get lost in brilliant surfaces that stretch on forever, studying the pressure smudges your boots leave on a mirror-like deck, wandering the empty passages of space crypts as elegant as the hotel at Marienbad. But the levels don’t really impress as theaters for shooting and flanking and escaping. If you stop admiring the nicely textured grates, you’ll find little joy in tapping away at the heads of hunkered-down enemies at middle distance.

After the levels, the guns are the developers’ most intense expression of their design fetishes. The standout is Lucas’ LSR44 railgun, the barrel of which chunks out to double length when using the charged shot. The scope displays a double line of horizontal marks that fill as the charge builds, and on your hip the boxy sight looks like it houses the guide lights of a tiny runway. But aside from the splashy impact of that LSR alt-fire and the electric bursts of the Pnv06 Voltage, few weapons seem to rouse much of a reaction from your enemies. The assault rifles feel plinky. Enemies sop up bullets and fall down heavily, like the game itself is getting tired.

The Helghan comic book that distracts Lucas from his efforts to save the world is a pretty loaded document. It reads like a Weird War Tales adaptation of the Black Freighter sections of Watchmen, which puts it close to the axis of things that comics veteran Joe Orlando had a hand in. (He worked as an artist for E. C. Comics, edited Weird War Tales, and illustrated one page of Tales of the Black Freighter as a metafictional flourish.) It’s set in a World War I zone of kills where the ISA rain death from zeppelins and biplanes into trenches below. The story follows the lone survivor of a slaughtered Helghast unit as he struggles across an infernal battlefield, loses his mind, murders his own men, and finally runs to a welcome death on enemy bayonets. Lucas finds pages of it two at a time, resting on train seats or tables in eugenics labs.

Of course, Shadow Fall isn’t the only Playstation-exclusive game released this year with an eye for comic book collection and a prologue where you play as a child. The same collectibles flung pointlessly around Vekta are used masterfully in The Last of Us, in which Ellie picks up the whole 14-issue run of Savage Starlight while crossing America. With blocky, charming faux-Kirby covers by Michael Avon Oeming and capsule summaries printed on back pages that look like authentic Dark Horse artifacts, the issues are pitched just right to work as pastiche and as a compelling story on their own. The lost back issues stand in for an entire buried culture, and their gradual recovery is both a nostalgic and regenerative process.Savage Starlight is one of those behind-the-back Globetrotter shots that The Last of Us nails like it isn’t even trying. The Shadow Fall book just feels like a distracting curio. There’s nothing in the lurid story to justify the only-in-gaming conceit that a government assassin would piece it together one page at a time as he travels through disaster zones. Savage Starlight and Tales of the Black Freighter both play off their frame stories in ambiguous ways, inverting and distorting the action of the main plot. Killzone’s graphic novel, on the other hand, feels like an energetic mash-up with no connection to the game it’s embedded into. It only makes you wish that all of Shadow Fall was an anthology of sci-fi weird war stories, in which you sometimes found comics about a dumb asshole named Lucas Kellan.

Lucas has two fathers—the good oaf dispatched in the opening minutes of the game, and the adoptive bad father (or Shadow Dad) Sinclair. The game Shadow Fall has a lot more than two. It wants to make itself in the image of Bioshock, Halo, Call of Duty, and even Spec Ops: The Line. It denounces war during every lull in the action, then glorifies it when the action resumes. It harangues the hero for his inability to make choices, then denies him the chance to make any. It tells you that neither side is really better than the other, then makes one side look like a troop of armored Nazis that have joined up with Satan’s expeditionary forces. The game never decides what it wants to be when it grows up.

The conflict Killzone begs us to take seriously is told as broadly as a playground lie. The Helghast defeated in the last game have been resettled on their own half of Vekta (literally one half, set apart by a wall that rings the entire planet) with their uniforms, nationalist symbols, and weaponry intact. An ISA black ops geneticist creates an “ethnic bullet” bio-weapon that could kill all of the mutated Helghast without hurting the human Vektans  But then she changes her mind, and makes it so the disease only kills humans and doesn’t hurt Helghast. I’m surprised she didn’t alter it further to destroy only guns or bicycles.

The game’s writers seem very proud of themselves for questioning their own moronic dichotomies. As if revealing a great secret, they suggest that the people who wear red lights may be no different from the people wearing blue ones. Perhaps, they muse, the fault lies on both sides, rather than on one population that is evil to the last man.

The developers find it very sad that the blues and the reds can’t end their cycle of hatred, and instead continue to turn badass weapons on each other and create next-gen panoramas of death. I find it sad that the series ever stopped following Sgt. Sevchenko and his band of broskis, who through dint of honest soldiering blew the hell out of an entire planet by the end of Killzone 3. At least they knew what they were doing.