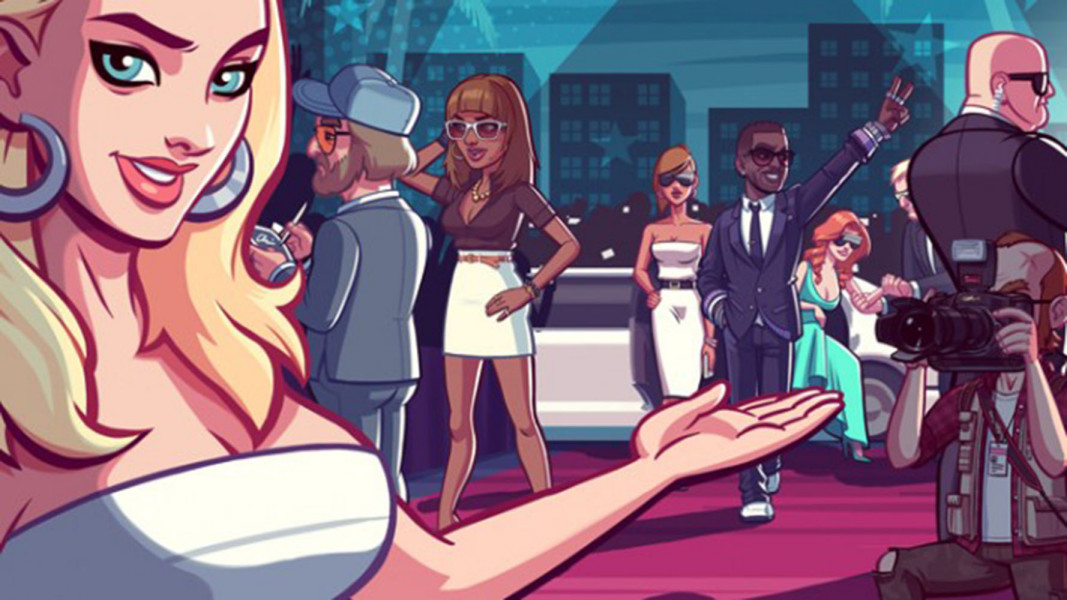 A few years ago, an editor at MAKE magazine programmed an Arduino microcontroller to mute his television when it detected the word “Kardashian.” Unless you downloaded the open source code and configured your own Kardashian-proof media bubble, you’ve probably heard about Kim Kardashian: Hollywood. The Glu-produced mobile game has been building buzz all summer for raking in an incredible number of 5-star ratings in the app store, and an impressive amount of cash to boot. What you may or may not have heard is that KKH is actually an iteration on another game, Stardom: Hollywood, which came out in February. With no celebrity attached, Stardom would hypothetically have made it through MAKE’s Kardashian filter, but it’s a moot point; the Kim-branded version has emerged as the real star, massively outpacing the original at attracting both media attention and the affection of its users.

If recruiting a celebrity to collaborate on the game was a savvy decision, choosing Kim Kardashian was a stroke of genius, and not just because of the exposure to her large and uniquely fame-conscious fanbase. Kim and her famous siblings pioneered the “jack of all trades” brand of celebrity that’s modeled in KKH. It’s hard to picture the collaboration working as well with a more traditional public figure, whose success is a function of excellence in one particular craft. I’m not hating—Kardashian-style fame is pure hustle, which, for the game, translates to a flexible and dynamic storyline.

I’ve been caught up in a manic frenzy over the game since around the time it was released in late June. I play as a model/actress/personality named Fern; Kim is an NPC who assumes the role of a friend and mentor. By the end of July, I’d made the A-list and by now, I’m the most famous person in my game world by a ludicrously wide margin. In fact, I have about three times as many fans as the next-most-famous celeb on the “top stars” list. I was feeling pretty special until I noticed something odd: Kim is nowhere to be found on this list. I have a half-serious conspiracy theory that you can only make the “real” A-list by unlocking the Illuminati level, but, more practically, this configuration makes a lot of sense. It would be awkward to have the player compete directly with Kim, and hubristic to design the game to ensure her untouchability. But her absence from the fame ranking also exposes her unique, spectral position between the game world and the real world that inspired it.

As the only NPC with a real-life counterpart, Kim transgresses the fourth wall with impunity to promote in-game clothing items culled from her real fashion line, the Kardashian Kollection, and dropping references familiar to fans of her TV show, Keeping Up With the Kardashians. Kim’s scripts are peppered with “bible,” (Kardashian-speak for “I promise”), and you often greet with a “hand-hug,” another nod to the show. Again, it’s hard to picture this kind of crossover theme working with any other celebrity. Kim’s contested “realness” is the anchor of her public identity as one of the first true reality TV stars. She exposes her real life and family to the public in an unprecedented and often shockingly intimate way—but always tangibly filtered through the show’s editing room or through her social media presence.

If these breaks in the fourth wall allow reality to leak into the game world, it’s nothing compared to the way that the game experience has flowed out onto real social media. The audience that Kim brought to the game is on-board with a playful notion of identity, and they’re exploring the game and adding depth to its characters and its tropes in some fascinating ways. There are now two major Twitter parody accounts dedicated to tweeting under the guise of the game’s love-to-hate villain, Willow Pape, with 65,000 thousand combined followers. Both tweet a mix of KKH-related content and regular, out-of-character jokes that adhere loosely to the caustic voice of the character whose image and name they’ve appropriated, even mixing in tropes from other pillars of teen girl canon. One tweet superimposes Willow’s image over the picture of Regina George from the “Burn Book” made famous in Mean Girls; our world is apparently not the only one to which KKH characters have access.

I made the burn book pic.twitter.com/IJTy1A0Kva

my summer in a picture pic.twitter.com/wOS5deAWWY

But just as we get to enter Kim’s world in the game, so too are we encouraged to let Kim’s world enter ours. Parody accounts aside, Tthe game heavily incentivizes users to link up their personal Facebook and Twitter accounts in exchange for game currency, which underscores the link between a user’s character and their real identity. Once connected, the game auto-generates posts about a user’s progress. It’s a sneaky way to promote the game’s own popularity on social media, but the game has earned the emotional investment of its players and justly benefits from the real pride they take in game achievements. Justly, at least, when the tweets are intentional—this functionality was behind an infamous accidental tweet from the Environmental Protection Agency broadcasting their ascent to the C-list. (It might have been less embarrassing to the EPA had their wayward intern attained at least the A- or B-list before the slip-up.)

Of course, insofar as the game has taken hold on Twitter, it has thrived on Instagram. Instagram, of course, is premised on a mediated and filtered version of reality, and, despite (or perhaps because of) the lack of native tooling in the game to integrate with the app, its trends are more creative and participatory. The #kkh hashtag is dominated by screencaps of users’ avatars—cartoon “selfies” in a microculture with a liberal definition of self. The main draw of social photo sharing seems to be the opportunity tweak the screencaps to create desirable looks that aren’t possible through the game’s character editing tools, like adding ombre to a hairstyle or a logo to a t-shirt. Of course, artful editing is part and parcel of Kardashian culture.

Thanks in part to the way it functions on dual in-game and real world planes, the game is an indisputable smash hit. Its disruptive success marks its final invasion into reality; by pulling Kim Kardashian further into the spotlight and materially increasing her personal wealth, the game manufactures her fame and her brand with one hand while leveraging it with the other. Kim has transcended, or at least complicated, her status as a “reality star” by diversifying the meaning of “reality,” and it seems that plenty of fans are game to follow her across the fourth wall.