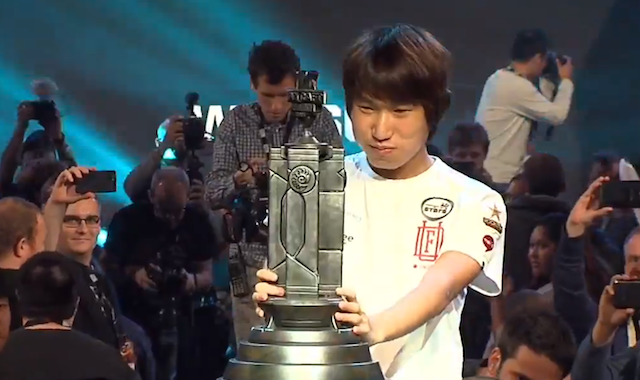 Ladies and gentlemen, StarCraft 2 has a new world champ. Over the weekend at BlizzCon, Kim “sOs” Yoo Jin completely frustrated Jae Dong, the overwhelming favorite, by the score of 4-1, making him a hundred thousand dollars richer. Here’s the winning match.

StarCraft 2, the ever-popular esport about machines busting down bases, is dominated by Koreans and is played at an extremely high level. However, it can be hard to tell how good these guys really are, if you are uninitiated to the world of esports. Merely watching the video belies the superlative talent of guys like You Jin and Dong.

In a recent story by our pal Yannick LeJacq, at NBC, it was revealed that StarCraft players are fast. How fast? “Most professional players can get up to five or six hundred actions per minute.” In case you need help with the math: “That’s 10 actions per second.” Just for the sake of comparison, a hummingbird flaps it’s wings 55 times-per-second. These guys fingers are hummingbird fast!

As we have talked about previously, the difficulty with esports as a spectator sport is that it’s not very accessible. It’s hard to relay this data visually. Hopefully we find better ways to visualize these athletes’ skills, so we can appropriately admire in awe.