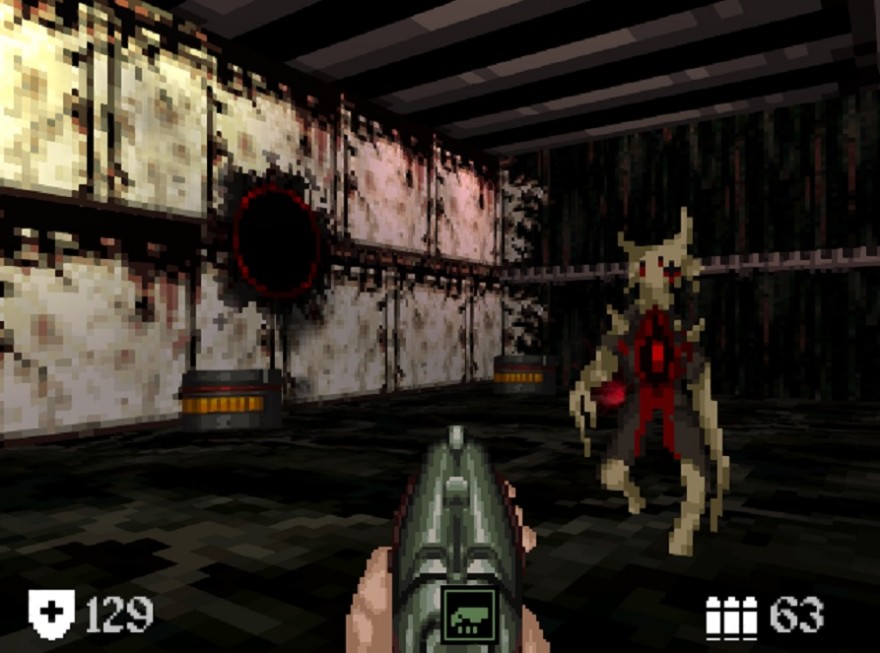 Amon26 struggles with “chronic night terrors” and copes with them by creating videogames. As a child, he was encouraged to capture his fears in drawings, but it didn’t help. He found the solution by himself: “it all changed the moment I personified a nightmare as an NPC, took aim, and killed it.”

Not all of his games are dark and haunting, but he is probably best known and appreciated for his videogame horrors such as Gyossait, Au Sable, and the unfinished Arrapha.

Another can now be added to that list as he released horror-themed first-person shooter In The Kingdom this week. It’s described as a vertical slice of what should become a much bigger game—this “pilot episode” consists of three levels. That should be more than enough to interest anyone still haunted by the gory mutilation and hellish landscapes of classic Doom.

Depravity hangs upon the walls of In The Kingdom‘s fortress. You enter its large gates unarmed and with the mean, chiselled face of a king staring unflinchingly down at you. Disturbingly, his portrait almost seems alive, like it could blink.

Inside are snarling wolf heads watching you menacingly from up high. Devilish goats stand on two legs, spewing vile bloodied projectiles at you, presumably extracted from their exsanguinated innards. Intestines and hollow bodies are strung across the skyline in perverted displays, skewered by meat hooks. Even the walls are coiled in pain as dark ooze eats away at any orifices it can squirm into. You’re surrounded by Amon26’s nightmare on all sides.

The lo-res graphics of In The Kingdom invite deep study as you attempt to make out the details of the uncanny viscera. However, there is no time to double-take. Many of the enemies in this fortress are cursed with constant reanimation. When you shoot them down with your firearm, they’ll arise over and over from a red ring in the ground, ready to die again. In a sense, you could recycle their torture, releasing them from imprisonment only to be dragged right back into it—a punishment fit for the sinners of Inferno.

So you’re kept you on your toes, forced to move deftly and deadly from one hellish necropolis to the next as if riding a vicious ghost train. Hallways are jagged to hide scourged souls ready to pounce. Corridors turn in on themselves like a labyrinth, sending you in circles, killing the same enemies and wasting ammo. In The Kingdom is quite short at the moment, yes, but its beautifully rancid designs are captivating for how they capture you in a cycle of terror (that you initiated), and are certainly worth investing in.

You can purchase In The Kingdom for $5 on itch.io.