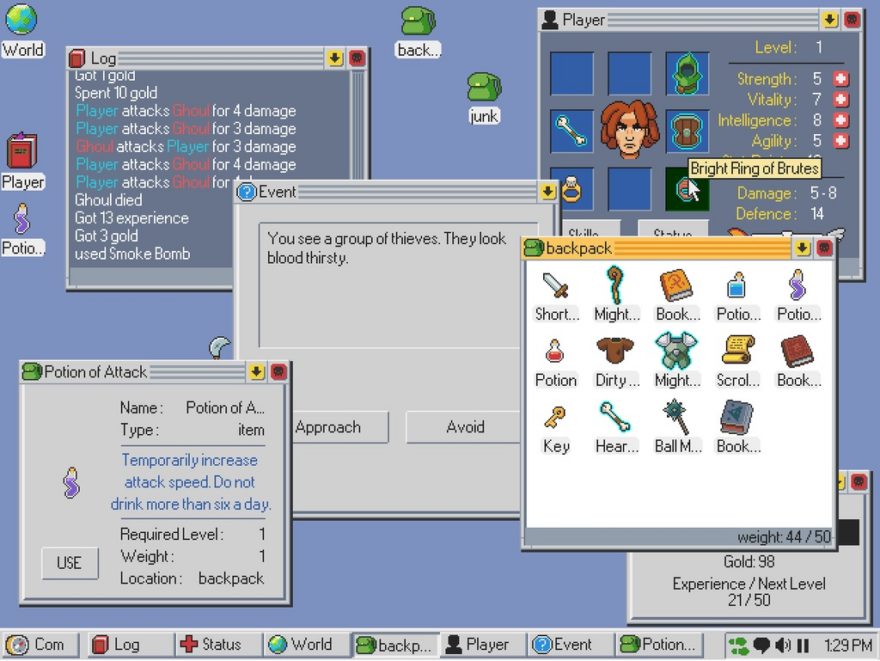 There’s a lot to manage in a role-playing game. It can almost feeling like having a desk job—managing inventory, grinding work, looming bosses. Add with crafting, foraging, and upgrading gear on top of that it’s no wonder I keep asking myself why I repeatedly subject myself to RPG work. Not everyone loves crafting, after all.

Andrew Morrish’s upcoming Kingsway is a fantasy RPG that riffs on the idea that the game is like a desk job, “pointing out the similarities between managing an RPG and daily tasks on a computer,” Morrish said. Players will have to rifle through a Windows 95–inspired operating system to navigate a slew of fantasy adventures. Part of the fun—and the challenge—is “being able to move things around on screen to get as much information as you can handle, while trying not to lose important items in the background,” Morrish added. Kingsway is a game for the multi-tasker in all of us.

the RPG is a desk job

“Enemies and traps are popups,” Morrish said, while “backpacks are the file folders where you organize your items.” Quests, on the other hand, come in the form of email—though you’ll have to figure out for yourself what’s spam and what’s not. With subject lines like “Hot skeletons in your area” and “Mages are angry about this one unbelievable trick,” it’s probably not that hard, though.

The operating system setup, which we’ve seen this year in other upcoming games like Orwell and Hypnospace Outlaw, adds a certain familiarity to the RPG setup. Because of that, the game should be playable to newcomers without much of a tutorial; those of us strapped to a desk all day are already too familiar with this sort of workflow. So load up your world navigator browser, folks. We’ve got some exploring to do.