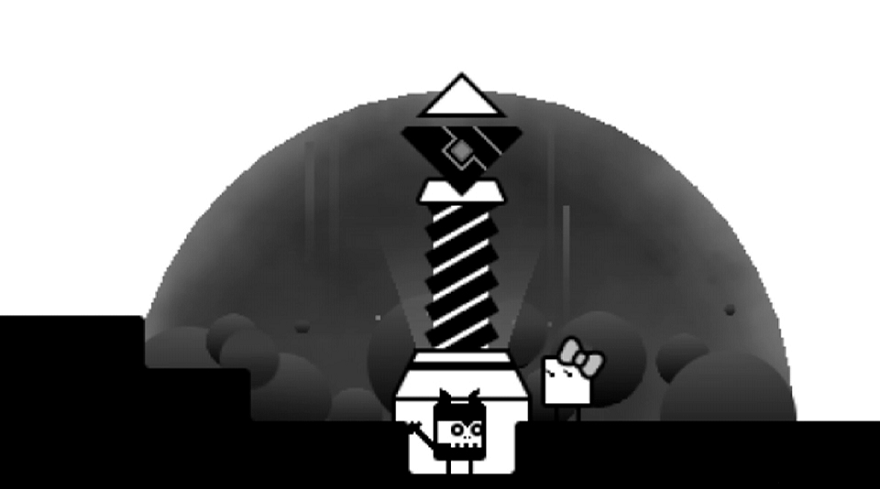 Kirby’s Adventure began with a drawing tutorial: first you draw a circle. Then you dot the eyes. Add a great big smile. And presto, it’s the thing from the box art. Kirby is a round friend in a comfy cloudy kingdom of curved enemies and padded landings. Kirby’s sort of orbital—all of Kirby’s enthusiasm, softness and swiftness is reflected in all surrounding things. BoxBoy is a new creation from the same studio, HAL Labs, and BoxBoy is a square with lines for legs and eyes.

BoxBoy can’t float into the air; he can barely jump. BoxBoy can’t swallow his enemies whole and absorb their powers, he doesn’t really have many foes to speak of. He has no curves. He has no colors. He has four flat sides and two limbs. Much of the big square of a planet he lives on can say the same. So while Kirby darted into fantasia to lock horns with the menaces of Dreamland, BoxBoy has to confront the threats to his world using his unique skillset. Which is to say, making boxes.

BoxBoy is a game of a mentality and scale of a different kind than we’re used to seeing from Nintendo. A little like Braid, it imposes a certain magical power then introduces obstacles that recontextualize your abilities, one stage at a time.

BoxBoy can create boxes—a chaining snake of them—to his left, right and above him. He can use them to make Tetris-shapes to fill certain gaps. He can keep them attached to his body to act as a shield or to nab ledges. He can weave them through narrows or to platforms above and below him and pull himself through like a grappling hook. He can use them to push himself out from a wall.

There are a lot of things squares are capable of, as it turns out. This big bubble of possibilities is where the game can get fun, trying to outwit different kinds of puzzles with your multi-purpose magic trick. Sometimes you’ll need to, erm, think outside of the box; other times you’ll inevitably find yourself overthinking things. But it’s not always like this: the in-between doesn’t work.

There’s a decent middle portion that feels like the game is getting ready to throw in the towel, when you’ve gotten the ropes but the puzzles seem to reflect an assumption that you’re still a rookie. This is several worlds in, and liberal checkpoints don’t really help grow fangs. Many of the pranks it pulls on you have already fooled you before, but this is a lurch before BoxBoy, thankfully, takes off, going from merely unwelcoming environments and moving platforms to magical objects and deathtrap dungeons.

The best parts of BoxBoy feel like Chaplin’s journey into the machine from Modern Times. You’re navigating through these winding mechanisms, spikes, treadmills, and lasers. Forced to think, sometimes with time to ponder and sometimes on the go, of what kind of box-piled shape is needed to glide to the other end. Some of these obstacles are finicky: there are cranes that will give to the weight of certain configurations and not others, and magical box rows that warp away when you complete them, dropping unused squares for a chain reaction. Those feel like flinches against the creative freedoms that are suddenly at odds with an intended solution.

Kirby is best for his world, taking down giant cyclops clouds and depressed trees with an arsenal of super powers. BoxBoy has one power—excluding victory dancing—but it’s all that’s required. Those hoping for 90° Kirby won’t get it in BoxBoy, but those looking for BoxBoy—puzzle-solving, muted box-making extraordinaire—need not look any further. Kirby is not up to this task. Unless, of course, Kirby eats BoxBoy and acquires his powers. Then Kirby might do just fine.