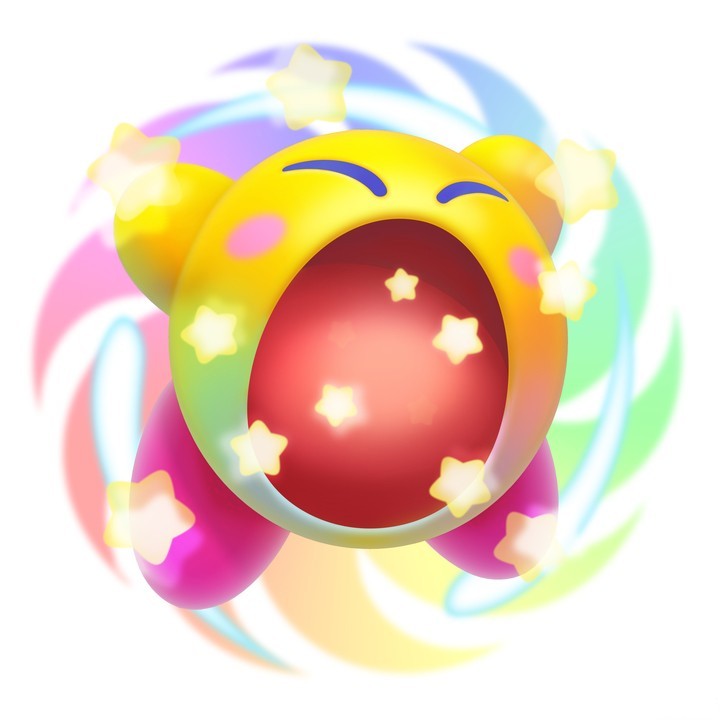 The pinkish gourmand that we know as Kirby started out as a placeholder. When Kirby’s Dream Land was being developed in 1992, the designers needed a stand-in for the game’s lead character who had yet to be designed so that the level artists could work their magic with a body in play. So, as a stopgap measure, they drew a blob. During development, this blob did blobbish things—hopped, plopped, floated. Over time, the levels started to bend themselves to the blob instead of the other way around. The developers recognized that the game had become about the blob, not the character the blob was supposed to have been the understudy for. Somebody named it Kirby and that was it. He became a permanent part of Nintendo’s rota (or at least a better known member than underused foil and Dastardly Dan lookalike Waluigi), and now the curtains open on his nineteenth release in a starring role.

Kirby is cushy and kid-proof.

Like its eponymous hero, the Kirby series has always been a stopgap measure. It’s a Platforming 101 class, a playpen where you can cut your teeth so that when you work your way up to the ritual slaughter of Super Meat Boy or, heaven forbid, I Wanna Be The Guy, the core loop of run-jump-die hurts a little less. Kirby is cushy and kid-proof. You make and unmake mistakes easily. There is no pit you might fall in that you can’t flap your way out of. You face bosses who really ought to be more conscious of how much you’re beating up on them and how infrequently they’re hitting you back. The animation and music when you die is less a punishment than a knowing finger-wag. Most enemies look big-eyed and doughy. Kirby games are encouraging teachers, or at least less-discouraging mentors. “You’ll get there soon,” they say.

Like most Nintendo games of the last ten years, Kirby Triple Deluxe is a variation on this series theme. Triple Deluxe evokes Kirby 64 more than a few times, in terms of level design and music that vamps on shared motifs. Like its predecessors, it’s kind and ramps up slowly, walking plush enemies toward you in a way that almost makes you feel bad for taking them out.

Also like its predecessors, Triple Deluxe‘s narrative concerns itself with two things: kidnappings and the pliable void that is Kirby’s gut. After Kirby eats a cake and a fish and some night cheese, a sycophantic winged ant kidnaps King Dedede and whisks him off for some vaguely nefarious purpose. This also triggers a Jack and the Beanstalk–level sprout that whisks Kirby’s house and most of Pop Star up into the clouds. Angry, alone, and with a new world to explore, all the pieces have fallen (well, risen, in this case) in place. Cue world after world of battles and transit in the adventure tradition. It’s the comfort food of game narrative, the same dish Kirby has always served.

The most significant addition Triple Deluxe makes to the Kirby canon is a new ability called Hypernova, a name so foolishly rad that I always imagine it being said with a Slash riff playing in the background and bookended by walls of pyrotechnics. I’m just saying: If whatever’s coming out of Kirby’s mouth when he’s rocking out with Hypernova is more serious business than the trans-galactic force of a supernova (which emits more energy in a single instance than our sun is expected to put out in its entire lifetime), then I just quit. Or accept “Hypernova” as a bit of unscientific hyperbole and move on.

Basically, Hypernova allows Kirby to suck up almost everything in the environment, except for the environment itself. Giant blocks, every enemy on screen, laser beams, whatever. Dude must have next-level ulcers. Strangely, with great power comes precisely no responsibility here. Once you go Hypernova, you basically gulp down everything foolish enough to get in your way, luxuriate in near-invincibility, and then calmly yet inexplicably give up that power when you finish the level. While it makes for some great scene changes, it hurts Triple Deluxe as a game. For a power-up that’s so emphatically about making you feel mighty, Hypernova usually only trivializes the level you’re playing. It doesn’t make you feel like you’re doling out cathartic comeuppance to enemies who deserved it; it makes you feel like you’re beating up on a bunch of second graders.

And yet, there in Kirby Triple Deluxe’s name is something that almost makes the whole experience new. It makes the best argument in favor of the 3DS’s defining feature since Super Mario 3D World. To leverage the handheld’s three-dimensional capabilities, Triple Deluxe uses at least three depths of field in each level: usually a foreground, midground, and background. This changes the nature of the 2D side-scroller since focus no longer resides on a single axis (the midground, where Kirby’s feet are), but on all of the information layered across those three depths of field. Triple Deluxe incorporates this deeply into the mechanics of the game, with some sections dependent on navigating the relationships between the distinct spaces in halls of mirrors, with objects that span all three depths, and other clever uses of spaces usually off-limits in a 2D context. These are the best moments in the game, the ones that prove that 3D can change the nature of traditional gameplay and exceed its reputation as a gimmick. It also proves that even if he is just a placeholder, Kirby remains uniquely skilled at moving through new spaces.