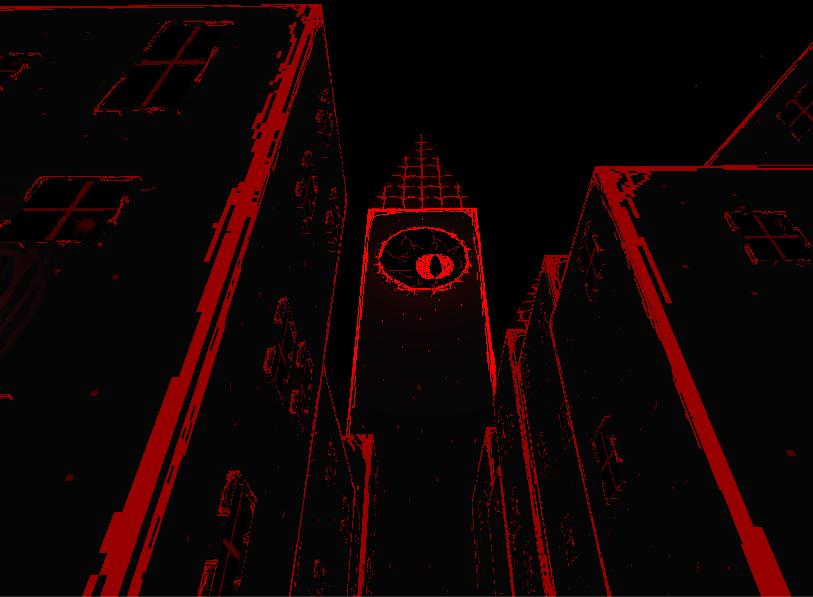 There’s a disembodied voice inside Kitty Horrorshow’s head that speaks to her when she wakes. “Broken worlds connected by desolate hub-city,” it said to her one morning.

Most people would probably ignore an isolated statement from an unexpected visitor such as this, but Kitty knew what it meant. And so she took a seat at her computer that day, opened up the Unity Engine, and began piecing together darkened hellscapes and the contours of ruined towns that she would slowly fill. That project eventually became the haunting first-person exploration game Dust City. It featured strange Doors, an omnipresent entity known as The Agency, and a desperate hunt for anomalies and lost artifacts.

This was Kitty’s first successful attempt at making a videogame. She had tried when she was much younger but failed to get on with the complexities of game development tools. After that disappointment, she gave up on the idea altogether, focusing her creative efforts towards writing instead. This situation remained for many years. It only changed when Kitty played Arcadia by Jonas Kyratzes. This was the first game made in the interactive story creation tool Twine that she had come across. It was in realizing Twine’s capability to create separate, interconnected spaces through hypertext that would spur her on towards, once again, trying to make her own virtual worlds.

“My paragraphs could become rooms, or valleys, or buildings, or dreams, or objects, rather than just fragments of a narrative sequence. It came easier to me because it was so much more fulfilling, so it replaced writing as my primary creative outlet,” Kitty explained to me.

Threatening, unpredictable worlds really are Kitty’s true calling. She has known this since she was a child, when she spent her time devouring as many first-person perspective games as possible. Doom and Hexen and Thief and EverQuest were all feasted upon as immediately as Kitty could manage. She recalls being “completely awestricken at the feeling of looking through the eyes of a surrogate character” when playing Doom at the age of six, or maybe seven.

That Norrath, the world in which fantasy MMORPG EverQuest takes place, was persistent—existing with or without her in it—and was populated by other, real people, caused it to stay with her thoughts after play sessions. She became fascinated with Norrath: how massive it was, and how its large zones could be wandered through non-sequentially. She would imagine Norrath without all its online inhabitants, just this unreal place existing by itself beyond humanity. A place that, to her, felt so real.

“That felt very profound, this idea that gameworlds built in computers were still technically places, almost like dreams—they aren’t physical, but they do happen to us, and we remember them. But these were dreams you could go back to whenever you wanted, and EverQuest in particular was a collective dream shared by hundreds of people at once,” said Kitty.

And so, upon discovering Unity—an engine that brings accessibility to the creation of 3D games—Kitty knew that she had to give it a go. She hasn’t looked back since. “Now that I’ve learned to make actual 3D first-person games I feel like I’ve been given the tools and powers of some half-crazed architecture-goddess, and I can reify any weird dream or vision I have. And I intend to,” Kitty said.

She proved this with CHYRZA, her second videogame, which is a short story about a haunted desert. For this, she lent her voice to the narration, as if taking on the story-building role of Rod Serling in each episode of The Twilight Zone.

It’s due to having a specific story that she wanted to tell that has led to Kitty marking CHYRZA as what will become an exception in her growing oeuvre of videogames. Typically, her process is more spontaneous, built from ideas that emerge as she wanders around the skeletal environments she starts off with, pulling from her “subconscious wellspring”, as she puts it. That said, CHYRZA does fall in line with her acquired style. It’s made up of a few common elements: eerie sounds, mystery, and low-res looks. Kitty admits that the lo-fi visuals are a necessity born of her amateur 3D modelling skills, but even so it’s an aspect of her games she’s not keen to let go, and not just because it allows for quick productions.

“Low-poly models and washed out/pixelated low-res textures channel something very atavistic to me, and recall those games I was so fond of (Hexen, Thief, EverQuest), which managed to successfully create massive, immersive, enthralling worlds in a time where 3D graphics were still extremely primitive. There’s something distinctly computer-y about the way those worlds look, something that instantly communicates that you’re in a virtual world or a simulation, and the fact that we can feel that way but still feel like we’re being transported somewhere is amazing and important and unique to this medium,” Kitty told me.

She wants every game she makes to be Hill House.

What’s more important to Kitty than the fidelity of the graphics and 3D models she pulls into existence is sound. It’s here that she really flourishes. In fact, one of her favorite activities is using tools like Bfxr to create random digital noises, which are then further layered and distorted in Goldwave and FL Studio to discover what Kitty calls “wailing cybernetic ghost-songs”. She even added an entire feature in Dust City so she could justify including a sound she loved that had emerged during one of these sessions—it can be found inside the green lantern within the floating house over the lake.

Kitty’s love of these unsettling sounds is rooted in her life-long obsession with horror. “My favorite horror ideas were almost always about setting—abandoned places, locations that were said to be haunted or somehow ‘alive,’ strange landscapes that shouldn’t exist, forests that twisted themselves around and swallowed you,” she said. Kitty has experienced so much of the horror genre that, sometimes, she thinks it can no longer get under her skin, losing some of its appeal.

This may be why it is no longer imperative that Kitty weaves her virtual cobwebs to the gestures of the horror genre any more. Creating videogame worlds is more of a somatic instruction now, a spiritual movement, perhaps an ancient ritual awakened within her body and realized through her simulacra. Whatever it is, it speaks in a tongue unfamiliar with the concept of genre or theme. Even so, she admits that with horror being such a ubiquitous part of her thoughts, it still defines much of her work—”I find a lot of beauty and wonder and comfort in things that unnerve me,” she said. If pushed on the matter, Kitty would say that she’s aiming to create “unsettling high-affect dreamscapes.” She wants every game she makes to be Hill House.

And so, too, does the voice that dwells inside her psyche. It returned to Kitty recently as she awoke one morning, striking her with the idea of “a city made of glowing blood.” From this quick stab of a concept, Kitty has been making a metropolis in silhouette, its outlines drawn in red by the bodily humor the voice spoke of. She’s calling it Skin, and as she’s in the middle of creating it, there isn’t much that she can describe of it that in-development screenshots don’t already reveal. “There is a kind of ‘story’, but it’s the kind that you discover by talking to characters and learning about your surroundings. It’s probably going to play a bit like a point-and-click adventure, in that you’ll be looking for items and talking to characters in order to progress.”

There is only one thing for sure with Kitty’s latest project, and it’s a feature that she has managed to carry across both and CHYRZA. That is, it will slowly, teasingly, get under your skin, where it will worm its way up to your brain so that you are left to wander its blood-red and void-black streets of twisted limbs and bestial wrath in each unoccupied moment.

You can download Dusty City, CHYRZA, and Kitty Horrorshow’s future videogames on her itch.io page.