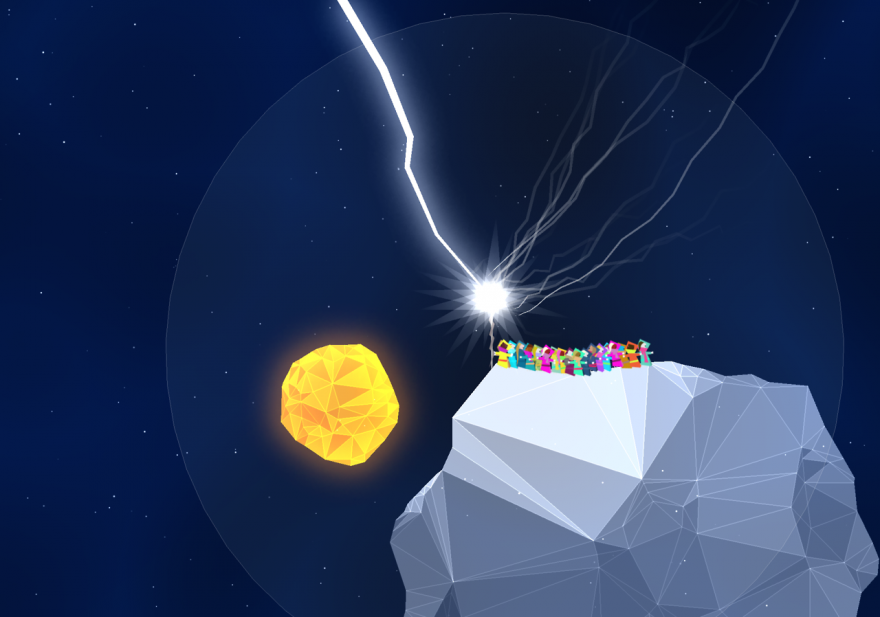 I admit to intentionally dying in Kiwanuka more than once just so I could watch the whole world shatter.

Kiwanuka is a curious little toy of a game, colorful and shiny and somewhat abstract. It gives the player control of a small army of villagers whose leader wields a magical staff charged with lightning. Though the visual of a multitude of tiny followers hustling about the screen conjures memories of Lemmings, it’s only a superficial resemblance: the only individual the player needs to worry about is the leader of the group; the followers are merely set dressing. If the leader steps somewhere she shouldn’t, however, the terrain she is traversing explodes in a shower of triangles—a delightful spectacle that inspired me to welcome my failures.

In fact, the moments during my time with Kiwanuka in which I was not charmed were few and far between. As I considered and experimented to determine how to solve the game’s puzzles, I was charmed by the spacey electronica that accompanied my head-scratching. When I succeeded at reuniting the Kiwanukans with their imprisoned compatriots, I was charmed to discover that I was introduced to each of them by name–the tiny, origami-like citizens of Kiwanuka who are at once so alike and yet distinct. And when I failed, well, there was that certain delight in watching the world shatter, like watching a brick go through a stained-glass window.

As a puzzler, Kiwanuka deserves credit for being focused. There’s really only one central mechanic: the ability to construct a living tower of tiny villagers that can swing around to create bridges between platforms. This allows the Kiwanukans to traverse the many geometric outcroppings that populate the starry expanse to which they have apparently been banished. This unorthodox method of traversal seems exceptionally limited at first, but the number of “ah-ha!” moments offered by the game is significant.

The goal of each level is to reach a fellow villager who has been imprisoned in a rotating, psychedelic prism, freeing them and adding them to the ever-growing ranks of the Kiwanukan people. There are thirty Kiwanukans to be rescued in all, one for each level, which gives the game just enough time to explore its central mechanic and offer new and clever ways to play with your expectations.

This process, incidentally, will take about two hours, but I’m not much tempted to go back and revisit them, because their pleasures were entirely aesthetic and intellectual. Indeed, if there’s any area in which Kiwanuka stumbles, it’s in failing to utilize its touch-based interface to elicit any tactile pleasure, which is a surprisingly large stumbling block. You drag your finger across the screen to move your character around, and you drag upward to instruct your followers to construct a tower, but the two commands aren’t mutually exclusive—often I would position my staff-wielding leader in what I thought was just the right place and drag up to assemble my followers, only to move my finger a smidge to the left or right (usually to get a look at the surrounding terrain) and find that the base of my tower was no longer where I wanted it to be, because my leader had moved along with my finger.

The number of “ah-ha!” moments offered by the game is significant.

Combine this with a pinch-and-zoom means of exploring the maps, and the game becomes less an artful curio and more a protracted exercise in finger-wiggling. Such touch-based gymnastics are by no means a deal-breaker, but they do put an extra level of distance between the joy of experimentation and the certitude of discovering the solution–was swinging my villagers around to that platform counterclockwise an incorrect answer, or did I fail merely because my tower was a smidge to the right of where I meant to build it?

Still, Kiwanuka’s personality wins out. There’s an amusing contrast between the mindless mass of followers parading behind the character you control in each level and the fact that each prisoner you free is given a clear identity: name, hairstyle, skin color, clothing pattern. Mark wears plaid. Olivia has long blonde hair and what might be a camo-print robe. Henrietta’s clothing looks like it’s spattered with blood. Josh has a guitar. Each new villager descends from a pillar of light to rest atop the tower of their peers, taking up the staff in the next level to lead the other Kiwanukans to freedom. Something about these tiny villagers is warm and personable, even though they have no dialogue or agency.

Even elements of Kiwanuka that should come off as insincere are instead the opposite. The levels are peppered with hashtag signs which encourage you to tweet about the game, and what might be a ham-fisted ploy at social media marketing instead comes off as charming, as each of the signs contains a picture of one of the villagers holding a sign inscribed with an amusing, sometimes abstract phrase: “Don’t love things.” “Resist all control.” “Do what happens.”

I’ve been turning over that last little koan in my head since I finished Kiwanuka. “Do what happens,” huh? I still don’t entirely know what to do with that one. Am I supposed to reflect on the seeming paradox of having agency and yet being passive? Does it suggest that no matter what one does, one cannot affect certain outcomes? Is this a little phrase that’s packed with meaning, or does it simply not mean anything at all? Is it just supposed to make people curious on Twitter, so they’ll check out the game?

Maybe it doesn’t matter. If “do what happens” is the bit of Kiwanuka that’s going to stay with me, that’s fine—I’ve played many, many games that have left me with less to think about. This little puzzler has enough heart that even though I know that these messages are placed there by the programmers, I can’t help but feel like I’m being addressed by the tiny villagers themselves. That’s probably recommendation enough right there.