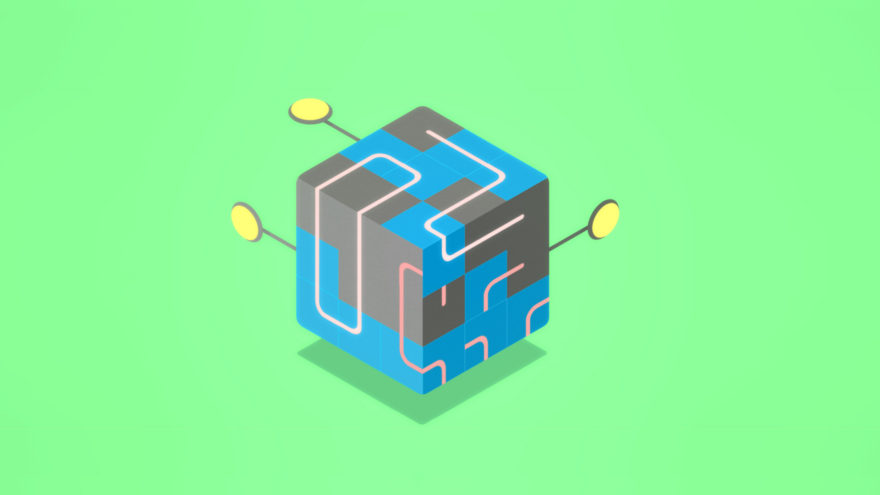 Maciej Targoni, the creator of Klocki, describes himself as a Polish game developer that lives in the woods, and wants his puzzle games to communicate with players using only its mechanics. His game has no score, no timer, and no tutorial—just blocks and shapes. Mostly lines.

A distinct design style rooted in a minimal aesthetic is established within Klocki—but it’s not what defines it. Targoni was more interested in creating a game with sharp mechanics. It’s the simplicity and clarity of the gameplay that inspires the art, he says.

Targoni’s early prototypes reaffirm this process. Scrolling through his Twitter feed offers an in-depth look at Klocki’s progression; the puzzle pieces are undeniably at the forefront, and have been since the beginning. It’s core concept remains quite consistent throughout it’s development lifespan, despite the shifting color palette.

Puzzles begin very simple; players simply have to swap tiles to connect lines. Slowly, Targoni introduces new features. There are dots, levers, and rotating tiles—each level builds upon the next, and puzzles evolve into three-dimensional spaces cluttered with knotted lines.


Even within the chaos of untangling puzzle after puzzle, Klocki doesn’t feel stressful. In fact, it’s actually pretty calming. This is likened to its ambient music that swells as each puzzle is solved, created by sound designer Wojciech Wasiak—who worked with Targoni on his previous puzzle release, Hook (2015).

That, and the missing clock. It’s an intentional decision to enforce the relaxing nature of Klocki. Each puzzle will likely last less than a few minutes, but if it takes a player longer, that’s okay, too.

Klocki was released July 13 on iOS, Android, and Steam, where you can buy it for under a dollar. A demo version is available for free on Kongregate. More information on Targoni and his games is available on the Rainbow Train website.