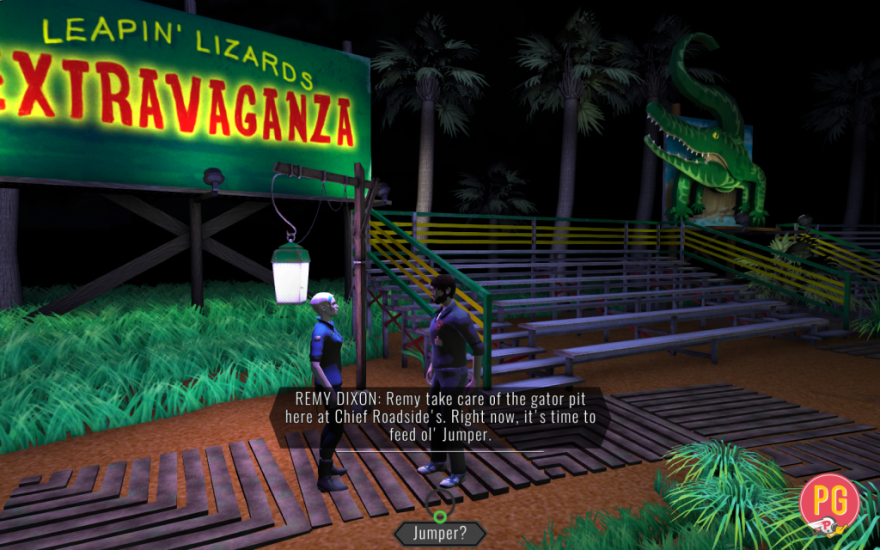 I am a past—my prime newspaper reporter with a vague drug addiction—the specific vices and my struggles with them never developed beyond being “a problem.” I am a never-primed blogger, looking to print big bold headlines with greasy celebrity gossip, akin to obvious internet empires. I am a private detective, I’m suicidal for a hot minute, and I talk to my dog.

Knee Deep is a videogame, framed as a play, centered on a mystery, set in the tacky side of Florida’s southern coin. In the first of its planned three acts, a faded Hollywood star has been found on a noose, dangling from the water tower of an outdated kitsch motel; it is both a relic in its accommodations and its culturally insensitive native theming. Everyone in the surrounding area—local cops, studio suits, ex-girlfriends and cashiers—are all thinking the same thing, but won’t dare say it: they suspect foul play.

With the exception of the blogger, Romana Teague, who just happened to be passing by when the news broke, your sleuths have bad blood floating in the boggy community. The town is full of oddballs and misfits with a web of history that explains why each is so close to suckerpunching the other. The game’s designers have made their world according to the gospel of Twin Peaks, in other words. But while David Lynch, Kentucky Route Zero and The Walking Dead games serve as evocated sources, Knee Deep has failed to absorb much about what made those entities work beyond quirkiness and visual cues.

Knee Deep is played like a baton pass. You have almost no control over your actions, each detective going where they’re scheduled to be—the diner, the motel room, the gator ranch—but you merely get to decide the order and the phrasing more than what happens. This is not a sin in and of itself, but it never justifies or finds reason in this structure.

It wears the skin of KRZ, but suffers the problems of LA Noire. Knee Deep revolves entirely around interrogations in one form or another, or the standings you have with characters. You can get a sense of how your standings will change with a color-coded system. Red is bad, green is good, though that metric constantly changes between “good” to your goal or “morally” good, and you’re always offered the option to say something rude or random, which rarely seems productive. Each character also has to file regular reports, and you choose the inflammatory degree of the spin, though you’re really asked to make a mountain out of a molehill when you need to inflate passing comments about local cuisine.

it just pushes from point to point

And that’s how the game is played. There’s a forced urgency since it just pushes from point to point. One of the weirdest transitions (in the context that this is a stage play) is when a mechanical circular platform grows around you, lifts you on to a rail and speeds on to another set, which looks more like Tony Stark suiting up than moody noir. You’re retold information so often it feels like spiralling around the drain. It’s all neon: colorful and alluring, until you shatter it and realize it’s just glass and gas. The lulls and meditations that make the game’s pop-culture reference points memorable are, here, cut up, vivisected.

Knee Deep is at best ankle-high. It’s shallow, and it constantly flops between making fun of gossip and a perpetuator of it. Drug addictions, broken families, sordid religions tacked on as virtual empathy. One character is a Native activist looking to get the insensitive signage stripped, and near the ending his cause changes from a noble goal to raving about the coming apocalypse. There is no transition. Even if “the strange” has a license to skew its own logic, Knee Deep seems to use “the strange” as an excuse for its own flaws.