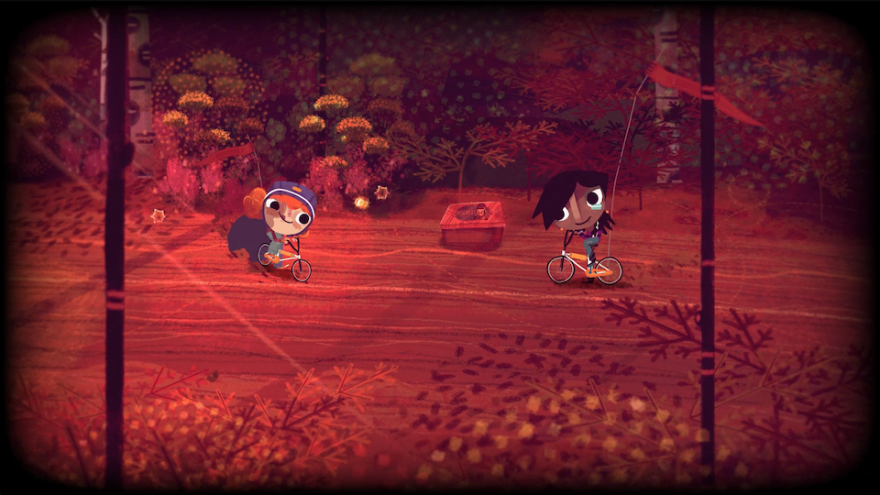 It’s strange to me that Knights and Bikes is set in the 1980s on a remote (fictional) island off the cold coast of Cornwall, UK. It’s a place where I spent some of my childhood, exploring damp sea caves when the tide was out and mostly being terrified of the pulsating purple jellyfish all around. There are the legends, too: the Beast of Bodmin Moor is the one that haunted me, a supposed wild cat that roams the Cornish grasslands, always conveniently out-of-sight so that cameras only capture a black shape with piercing eyes. There’s also a history of druids and pagan rituals held in the wilderness there; you can find large stones arranged in mystical shapes if you know where to look.

All of this culture is what Knights and Bikes appears to be drawing upon. Although the team behind it are sticking with the more universally recognized touchstones of The Goonies (1985), Earthbound (1994), and Secret of Mana (1993). What they mean to say by calling upon these games and films is that Knights and Bikes is an exploration of childhood and the fantasies and fears that come with its many adventures. It’s something the team—calling themselves Foam Sword—have experience working with, most of them having contributed design, programming, or art to LittleBigPlanet (2008) and Tearaway (2013).

This past experience of the team comes through in Knights and Bikes and it’s partly that which makes it strange for me. It has all the playful, expressionistic touches of those games set in delightful, entirely fictional places. The houses have twisted frames and stretched roofs, the forest is a cozy and deep red, the caravan parks don’t look absolutely miserable. Having painted this Cornish island with magical realism means it has a visual panache that doesn’t quite match my memory of the place. In fact, the game’s looks have more in common with the many recent games that follow teenagers growing up in the Pacific Northwest than anything else.

Turns out that these legends are very real

Not that this is a bad thing. I’d be quite happy to pedal and play around the place Knights and Bikes depicts. At least there are no jellyfish. Plus, beyond that, Foam Sword seem to have replicated some of the exact activities that I spent my summer vacations doing. Strange islanders will give you quests that involve finding ancient relics and solving mysteries. Yep, did that. You also get the option to hop on a bike to explore or wander off on foot. Yep, did plenty of that too.

It should be mentioned that the game is being built as a co-op experience, too. You can play with a friend sat next to you on the couch or you can play by yourself and have the AI take over the other character. Speaking of which, the two heroines are called Nessa and Demelza. “Nessa is an orphan from the mainland, who has run away to the island searching for her past and her identity,” explains Foam Sword. “Demelza is a video game-obsessed islander searching for the truth using clues from her favorite game.”

Together, they set off to investigate the medieval legends of the island after new evidence suggests that there’s more truth to them than was previously believed. Turns out that these legends are very real, with angry spirits having turned up, threatening the island’s tourism business, and gradually destroying the land with it. And so with Nessa, Demelza, Captain Honkers—Demelza’s pet goose—as well as the pickled severed head of a fallen-knight for some reason, you set off to defeat these spirits (aka undead knights). This main thread of the story leads you into dungeons where you’ll need to fight bosses with the aid of the abilities you gain from the treasures hidden around the island. Oh, and frisbees. You fling frisbees to hurt things in this game. Pretty sure I did that too, if you count flinging a frisbee off a hill and sending my dad flying after it, through a fence, and then tumbling through stinging nettles. He didn’t play frisbee with me again after that.

You can support Knights and Bikes on Kickstarter and also vote for it on Steam Greenlight. It’s only been confirmed for PC so far.