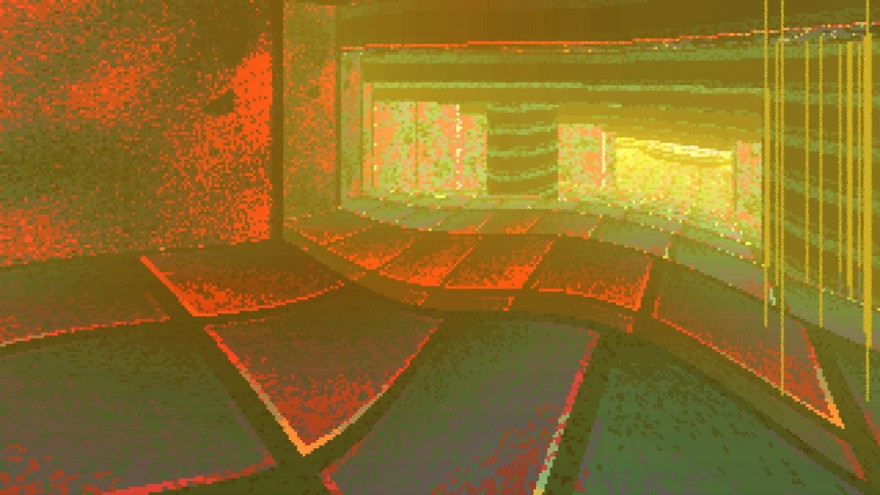 Knossu‘s wall textures sizzle as if they’ve been half-cooked on a frying pan. It’s like someone went nuts with the spray paint tool in Microsoft Paint and the most garish colors they could find. Have you ever bitten into something that was way too sour? Imagine that vigorous and unbearable taste carved into blocks; that’s what I’m staring at. On top of that, each pixel in these walls fidgets intensely as I move around and it makes me immediately uncomfortable. The impression is that I’m being stalked by something overbearing and encompassing.

This is bold opening up with a description of a wall, I know, but this is important. For this is a game about being trapped in a non-euclidean maze. There are a lot of walls. As they confront you, the instant urge is to find something easier on the eyes. You want to escape. But you can’t. There seems to be no respite from this frazzled look burning into your pupils.

Jonathan Whiting, the creator of Knossu, says that it’s his answer to the following question: “What can you do with a Doom style raycasting engine if you’re tired of realism and shooting things?” It’s also inspired by JP LeBreton’s “Tourism play,” in which he uses a mod to take combat out of the 1998 first-person shooter Unreal so he can focus on running through its environments. As such, Knossu is strictly about your estranged relationship with its architecture. But it’s also a horror game.

the corridor you just walked down has turned into a large hall.

Before getting to that, it’s worth asking why there are a handful of people still experimenting with lo-fi graphics. Lilith is one of the most interesting to watch. With Crypt Worlds and Oneiric Gardens she recalls being lost in King’s Field‘s dungeons in her youth. She finds that the sludgy surfaces and dreamlike geometry is able to bring out raw feelings in her. You can see why. Unable to emulate realism, these early 3D worlds used bold but sparing landmarks and a grisly attention to coarseness in their textures—almost as if you’re supposed to run your fingers along them—all to create a sense of place out of their abstract layouts.

Whiting uses these same techniques in Knossu. It is perhaps necessary. Every pillar, staircase, and enclosed stone room in Knossu is given its own color palette and pinch of character, and then it’s turned up to 11. This is so you can recognize where you are at a glance when you’re running around. Being a non-euclidean maze means that it is easy to get lost in Knossu. Turn around and, suddenly, the corridor you just walked down has turned into a large hall. This happens over and over. But that’s not scary by itself. If it was then Antichamber would have been horrifying.

What you soon discover is that you’re being chased by an unknowable mist of what might be glitched data that swallows you up if it gets the chance. A mist? Yeah, it doesn’t read as something that would be scary. But it can be. Especially when you find yourself frantically running around in circles, unable to get out of a loop. It’s something out of a nightmare I have definitely had before. The panic that Knossu can bring out in these situations is truly its greatest achievement.

Without jump scares, without screamers, without gore and weapons, it manages to find pure terror. What it does have is architecture that seems oppressive and alive and after you. It shapeshifts right before your eyes and never turns down the contrast so it’s always shredding at maximum volume. When it all starts to wobble and the sound of static rings in your ears you know that mist is nearby. Perception is turned against you.