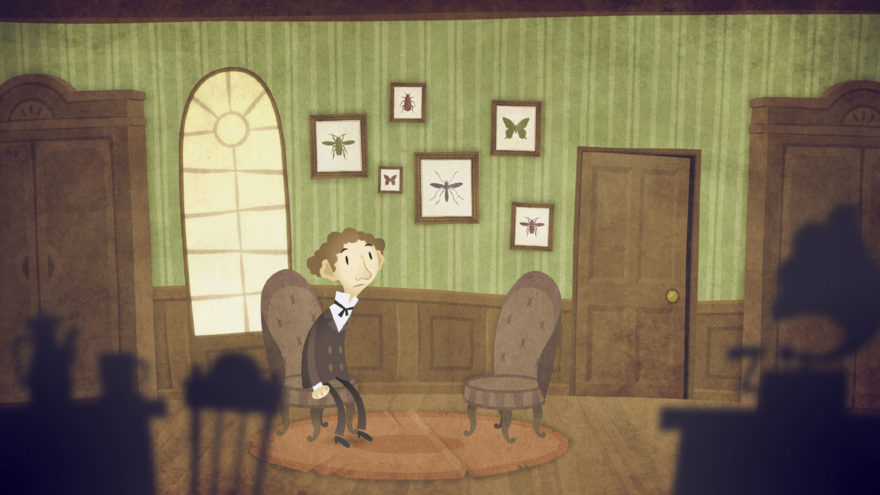 What I think I like the most about The Franz Kafka Videogame is that it isn’t faffing around. With a title like that you know what you’re gonna get when you play it. An all-singing, all-dancing pixel-art rendition of Franz Kafka’s works? Oh yes, I’ll take that, thank you very much.

But, actually, that isn’t quite what this upcoming point-and-click adventure is. Speaking to the sole creator, Denis Galanin, he told me that he uses “literary works as a basis for [the] realization of [his] own ideas.” Back in 2012, he made a game called Hamlet, which as its description rightly puts it, is a “twisted” version of the Shakespeare play. Galanin told me that Hamlet was a way for him to explore ideas in and around the concept of a parody. It was far from a straight-up videogame adaptation that tried to stay true to its source.

“Kafka’s works integrated with my own ideas”

The same goes for The Franz Kafka Videogame, which is also a vehicle for Galanin’s ideas, but this time appropriately zooms in on surrealism and absurdity. “My game doesn’t use a plot of any one novel of Kafka,” Galanin said. “The game is a mix of various ideas, characters, and situations from Kafka’s works integrated with my own ideas. To show the atmosphere of absurdity and total uncertainty is the most important to me. Therefore The Franz Kafka Videogame is not copying Kafka, but is interpretation and adaptation of Kafka for the videogame.”

That isn’t to say that Galanin hasn’t done his homework. Prep for making The Franz Kafka Videogame included reading almost every novel by Kafka and their adaptations—from animations, to live-action, and theater. It follows a man known only as K. (in keeping with Kafka’s way of naming protagonists) as he gets a sudden offer of employment that changes his life. He has to make a distant voyage for the job and, to his surprise, finds the world beyond his homeland isn’t as normal as he thought it would be.

Galanin told me that while The Franz Kafka Videogame is a point-and-click adventure, it doesn’t feature traditional puzzles, nor does it have standard features like an inventory. “You have to ‘think outside the box’ to solve the majority of puzzles,” Galanin told me. “But puzzles aren’t additional part to the plot of the game. Puzzles are the main and integral part of plot and narrative.”

Galanin has already picked up a couple of awards for The Franz Kafka Videogame at Intel Level Up Game Developer Contest 2015. He’s hoping to release it for PC and iOS in early 2017.

You can find out more about The Franz Kafka Videogame on its website. You can also check out its Steam page.