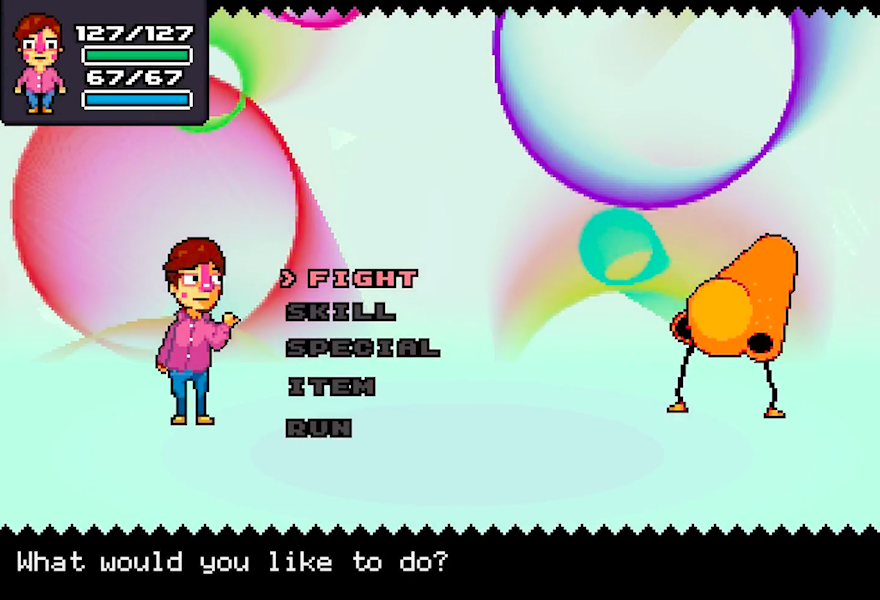 As most of your teenage or 20-something friends can probably tell you, working in food service isn’t exactly the most rewarding way to spend your time. Customers will yell at you for mistakes you didn’t make, your manager will ask you to work overtime just as you’re heading out the door, your coworkers will come in having skipped one too many showers, and you’ll have to clean up more than your fair share of mystery slimes throughout your illustrious career. But hey, when you get home, you can always relax with a nice videogame, right? Just turn it on, pick up your sword, and… kill more slimes.

Enter Knuckle Sandwich, an upcoming RPG that blurs the line between adventure and menial labor. You play as a typical diner worker adjusting to his new life in Bright City, an Earthbound-style wonderland where being attacked by a horde of giant “apple bats” on your way to work is taken for granted as just a normal part of the daily grind. Details on just how exactly the game expects you to defend yourself against these inexplicable threats have been sparse until now, but thanks to a new video walking through some of the game’s battle system, we now have a clearer understanding of the types of life-or-death struggles you’re expected to endure in this city just to get to and from your shitty job.

The video opens on what appears to be a mugger threatening to introduce you to “the other side of town,” before he is quickly dispatched by a friendly vampire. “Bright City is a nice place to live,” claims the vampire. “But some parts of it are pretty scary.” He offers to teach you to defend yourself, and throughout the process, gives us a better look at some of the game’s weirder enemies. There’s a group of trashbag-wearing “fibre ghosts,” a trio of giant, angry bees with boxing gloves, a team of handsome men and, of course, don’t forget the slimes. Welcome to orientation, new fish. Have you met the giant walking nose?

snaking your fist through a series of mazes

You’re not without your own arsenal of quirk, however, as you also have access to powerful skills such as “curl up” (in a fetal position), as well as impressive special attacks like “complicated punch.” It’s the type of understated humor that’ll be familiar to fans of the recent anime One Punch Man, right down to the expressionless “this shit again?” look on your protagonist’s face, but that’s not to say the battles aren’t lively. To pull off these specials, you’ll have to play a different Mario Party or WarioWare style mini-game for each one, like snaking your fist through a series of mazes or playing pinball with your coworker’s head.

The routine nature to the fights in Knuckle Sandwich isn’t for lack of a larger quest, however. Since you’ve arrived, townsfolk have started going missing, and a mysterious series of cults have begun sprouting up asking questions. But if Mr. Vampire is to be believed, this fantasy adventure is only one part of living in Bright City, and doesn’t seem all that out of character for the town to begin with. Whereas games like Final Fantasy might seek to downplay the tedium of their random battles with grandiose effects and flashy character designs, Knuckle Sandwich instead leans into it by essentially making them just another part of the job. Rather than great heroes, you are ordinary people leading lives that are anything but epic, and fighting the bad guys is the equivalent of carrying an umbrella on a rainy day.

Knuckle Sandwich’s release date hasn’t been made public as of yet, but they video explains that those interested can find out by signing up for the game’s email list over on its official website.