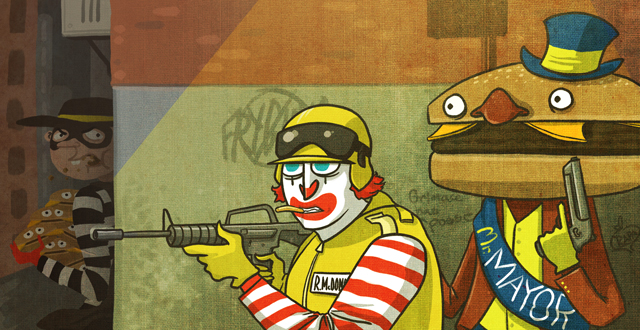 At first all I hear is “McDonald’s.” It’s nearly 2:30 in the afternoon and I’m starving, so when Cho Sung Hwan first mentions the Golden Arches my lonely gut perks up. But the SmileGate project manager and director isn’t talking about Big Macs, nor is he even really thinking about food. He’s talking about localization.

“We want to be like McDonald’s.” Hwan cracks a smile as he says this, but he’s not being facetious. The city of Busan, South Korea is holding its third annual G-Star game convention, and a quick tour of the floor shows a number of developers hungry to expand beyond the border. Hwan is no different in this search for global success, save for one key difference: He’s already tasted it.

Taken aboard SmileGate as a technical director, Hwan’s first project was CrossFire, a first-person shooter quite openly inspired by the popular Counter-Strike. Since its Korean release in 2008, the title has steadily become one of the globe’s most popular games, making its way into 11 countries and just this past August logging a world-record 3.2 million concurrent users in China alone.

CrossFire wasn’t an immediate success, but Hwan pointed to SmileGate’s ability to communicate with users, test their reception during localization, and adjust accordingly. While leaving core concepts untouched, “We’re willing to redesign characters and details,” he said. “Like McDonald’s, we won’t change the main ideas; we’ll change the flavor.”

When McDonald’s moved overseas, it presented itself simultaneously as a local and an authentic American dining experience. Of course the restaurant sold hamburgers, but it also tinkered with its menu: adapting local sauces, creating specialized burgers, and even inventing entirely new items. As documented in James Watson’s book Golden Arches East, one of McDonald’s great advantages in China was that it offered visitors “a moment of equality.” Losing face was so easy in competitive banquet halls that many hosts paid extra for private rooms simply to avoid the public shame of ordering cheaper meals than others. At McDonald’s, there was no need to worry about scenarios in which others would be ordering better food or more expensive alcohol. A trip here held the promise of being treated as an equal, in addition to connecting visitors to a global culture.

The restaurant’s experience in China also illustrates that successful localization is rarely as simple as executing a well-crafted strategy. It is also a dialogue, an ever-changing exchange of ideas between different groups of people. When high school students began flooding Hong Kong McDonald’s locations after school and socializing/studying for hours, management had no idea what to do. Rather than fight this development, though, the company embraced the moment and soon the idea of McDonald’s as an after-school club was born. Retired Gurkha troops were hired to fend off any triad harassment, and parents suddenly had a safe, smoke-free Hong Kong environment for their kids to enjoy.

Gaming as a service industry, free-to-play, microtransactions: South Korean developers have been pioneering these models of play for over a decade.

Gaming culture in South Korea has followed a similar dynamic between availability and appropriation. Console gaming was expensive and never really took off in any sustainable way; if you didn’t pirate games you probably didn’t play them. When the government subsidized the construction of a nationwide broadband network, it opened up the possibility for extensive online use. People took this development and connected through something that’s become inextricably linked to Korean culture in its own right: online videogames.

Since computers were also expensive, cyber cafés called PC bangs granted cheap online access for those who couldn’t afford them. When subscriptions became too expensive, Korean designers developed the free-to-play model. Online titles exploded in popularity, and people found themselves taking over these public spaces to play games. Nowadays the proliferation of PC bangs is so extensive that it seems every block in the country has one, and they’re often turned into miniature war rooms as people huddle for intense online matches with other teams. It’s never been easier (or cheaper) to play.

As a result, gaming has charted a vastly different course here, and developers hoping to stretch overseas find themselves in an interesting predicament: They’re running into some of the same problems McDonald’s did when entering South Korea.

When you think of Korean videogames, perhaps you think of massively multiplayer role-playing games derided as being too much of a grind. Or perhaps your mind wanders back to Wiki, a game that bore a little too much resemblance to Nintendo’s The Legend of Zelda: The Wind Waker. Unfortunately, many Korean titles still suffer from the stereotype that they are devoid of creativity or objectively low in quality. Despite the immense success of CrossFire, it’s often slung aside as a subpar Counter-Strike ripoff. Before McDonald’s could make strides in Korea, it, too, had to work past initial condemnations that its product was inferior to local fare such as rice.

The company did this by promoting locally-purchased ingredients as the highest in quality and putting its own spin on them, and it seems that many Korean developers are attempting to do the same. G-Star is filled with titles touting the blend of Western technology like Unreal Engine 3 with Korean-style massively multiplayer online games and shooters. The line between appealing to Western tastes and maintaining a sense of uniqueness, however, is a precarious one. Despite its solid gameplay and free-to-play model, for example, Neowiz’s third-person shooter Dizzel has already invited unflattering comparisons to Gears of War, leading the development team to tweak the design in order to differentiate it.

When it comes to localization, sometimes the reasons for success are also some of the most unintended.

Still, Hwan tosses aside the idea that there is a “Korean style” of game to contrast with those from Japan or the United States, saying “the Korean style is a hybrid of influences.” Every other developer I speak with at G-Star says that development now begins with international audiences in mind.

For the most part, it seems they’re right. Many of the projects at G-Star wouldn’t look out of place at a Western show, but it’s important to note that when it comes to localization, sometimes the reasons for success are also some of the most unintended.

Sometimes, you just get lucky.

Throughout Asia, McDonald’s demonstrated that timing is everything. Often the restaurants appeared at a time when residents were starting to exhibit curiosity about foreign food and culture. Simply by transplanting its restaurants McDonald’s inadvertently offered luxuries that cities didn’t or couldn’t yet offer: clean public toilets and air conditioning. The facility itself became something of an oasis during days out and hot summer months, while local restaurants had to adapt to these new expectations or face extinction.

Gaming as a service industry, free-to-play, microtransactions: South Korean developers have been pioneering these models of play for over a decade. They’ve only recently been taken seriously in the West, but the impact has been significant. International companies like Electronic Arts and Capcom are entering into partnerships with them, while Sony and Microsoft are either already offering free-to-play services on their consoles or close to including them. Hwan and his colleagues may have picked the perfect time to look overseas as people around the world start to tune in to their particular brand.

Hwan is not a fan of South Korea’s new Shutdown Law. In an attempt to curb what it sees as a growing national problem in game addiction, the government has recently banned children 16 and under from playing online videogames for a six-hour block after midnight. The law had few backers at G-Star, with Hwan saying that “it should be on the parents to counsel their kids” in these cases, and other developers making similar statements.

The whole situation shines a light on an unintended and unfortunate aspect of Korea’s gaming culture, highlighting its potential to immerse people as well as its ability to create friction in society. PC bangs and developers have made it so easy to connect to videogames that their potential to affect students’ health has become a serious problem. Some in Korea regard playing games in the same vein as abusing drugs, while a study conducted last year even recorded the potential for drugs to help combat addiction itself. Korea’s appropriation of online gaming has been amazing, but it’s not without its potential land mines.

As the Golden Arches became permanent fixtures of the Asian landscape, residents began to question whether the development was truly beneficial. The Japanese didn’t examine the health benefits (or lack thereof) of fast food for about 15 years, while some in Hong Kong blamed the mass shuttering of traditional teahouses and restaurants on McDonald’s undercutting competition. As Watson said in an interview, “By its very nature, localization implies globalizing changes, not all of which necessarily improve the lives of ordinary people.”

This isn’t to imply that we should hope against Korea’s gains internationally or that they are the direct cause of societal tensions. For better or worse, its brand of gaming is already growing in popularity, and Western developers are increasingly turning to Korea’s own experiences. The potential for new relationships and interaction is clearly there, and Hwan is particularly excited about “building a strong online society.”

After all, ever since he first played Galaga as a child, Hwan has idealized the communal experience of visiting the arcade, playing with others, and forming new bonds. All he wants to do is give everyone else the same opportunity.