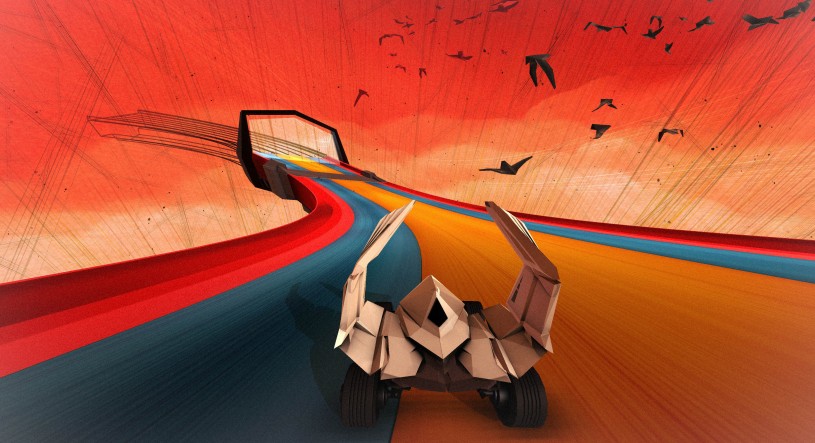 Krautscape follows a lineage of racing games that are made to look good in a screenshot. And look at it—Mario von Rickenbach has certainly dressed it well.

But instead of appealing to the tenets of realism—with shiny bonnets, brand names, and lens flare—Krautscape has flying cars, tri-color tracks, and blood-red skies. It looks like a surrealist painting.

Entire corners can be cut by flying across them

The visual panache of Krautscape is only the start of its inventiveness. That road is divided by colors for a good reason: the leader of the race uses it to control the layout of the procedural tracks. Sitting in the middle yellow streak causes the next section of the track to form in a straight line. Being in the blue will curve the track to whichever side your car is sitting on. The same goes for the red sections at the far ends, but the corner will be much tighter. There are also icons that pop-up across the tracks that activate a mechanism when driven through, like a giant fan or a huge loop, and some raise or lower the track.

But affording so much control at the steering wheel of those in pole position creates an imbalance to what should be a fair race. This is where those folded up wings come into action.

At any point, the bird-like wings can be flopped to either side of the car to lift it off the ground. Entire corners can be cut by flying across them, giving those behind the leader a means to catch up and maybe even jump ahead, if they’re sly enough. The catch is that you have no air thrusters, so you need enough speed to maintain flight at a decent height. There are black swirls scattered throughout the sky that offer a boost when transcended but it’s not often they intercept the flight path you’ve chosen.

So, unlike the metal-grinding argy-bargy of other racing games, Krautscape‘s competition is elegant, rewarding those who are can spot a potential gain and dare to fly over and snatch it. This bravura is exactly what each of Krautscape‘s race modes encourage. There is no linear racing from point A to point B. You have to careen back and forth across the labyrinthine roads that you’ve collaboratively created, always thinking of ways to get the upperhand through intelligent movement rather than driving skill.

Krautscape‘s downside is its online multiplayer restriction. I’d imagine this is due to the difficulty of writing computer opponents that provide enough challenge, as the tracks are created on the fly. If true, it just goes to prove Krautscape‘s unique style of racing that champions daring maneuvers over technical mastery.

Krautscape is available through Steam Early Access for Windows and Mac.