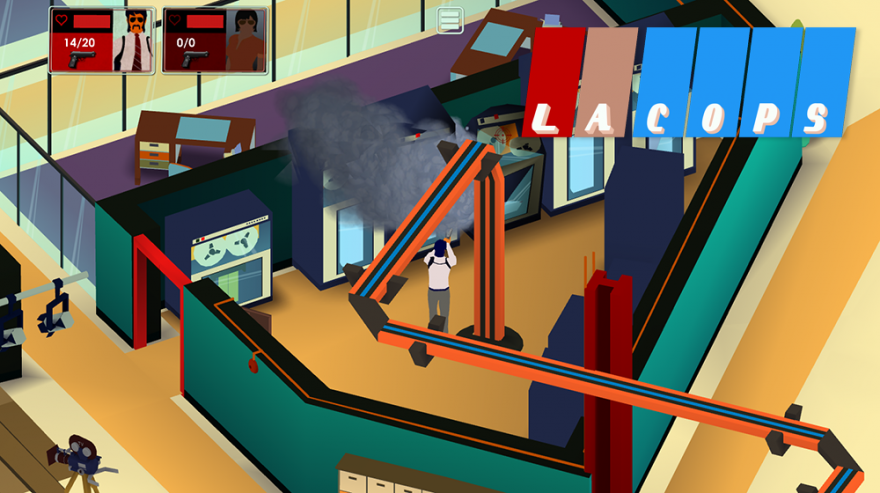 Kowalski has it all. Handlebar moustache, manicured sideburns, aviator sunglasses, gun holster suspenders; he’s the epitome of ’70s cowboy cops. If the upcoming videogame he stars in, LA Cops, were a film, Kowalski would be Will Ferrell’s most boisterous role to date (imagine a combination of his characters in The Other Guys and Anchorman).

“We want to tell the player things visually rather than literally,” explains Oliver Clarke of Modern Dream, the studio behind the game.

This is why Kowalski looks as he does, and is first seen sipping contemplatively on a coffee in a diner (presumably, he’s already eaten the accompanying donut). LA Cops is Spike Jonze’s music video for the Beastie Boys’s song “Sabotage” turned into a videogame. Visually, it’s David Hockney’s selective painting of an LA swimming pool, “A Bigger Splash“, and Ed Ruscha’s refined painting of a gas station in “Standard.” The result is a slick-looking parody and homage to the flamboyant buddy cop shows of the ’70s.

the ebb and flow of methodical study and bloody execution.

Predictably, then, in LA Cops you control two mismatched coppers who argue about donut consumption and fight crime by shooting first and asking questions later (or not at all). You switch between the partners to carefully set-up cover fire and breach-and-clear maneuvers. You bust down doors to an eruptive display of gunshots and hot pink jets of gore. Cones of vision, repeated plays, and prayers to the artificial intelligence gods act as your guidelines. When that fails, there’s always the comedy of stray bullets and the damage they cause, such as smashed glass and cracked wall panels; the only thing missing is the canned laughter.

Clarke claims that LA Cops “is an out-and-out shooter.” Except, well, it isn’t—not quite. Modern Dream has combined the room-to-room flow of modern top-down shooters, such as Hotline Miami, with the isometric view and cautious tactics of the classic Bullfrog strategy game Syndicate. So, in practice, the officers aren’t the most disparate pairing in LA Cops—it’s the ebb and flow of methodical study and bloody execution.

Carving up rooms through tactical analysis is satisfying.

The key to Modern Dream successfully adding this deliberated touch to what would otherwise be a twitchy shooter is in letting players manufacture effective cooperation between the two officers.

“Currently, we’re making levels that split into two or more channels that allow the player to attack from different directions simultaneously, and allowing the player to move their partner remotely. We think there’s a lot we can build on here by combining character control with remote control to make some intense gameplay.”

Clarke isn’t wrong; there’s plenty of potential here. Dennaton Games know this, too; this is why its upcoming sequel Hotline Miami 2: Wrong Number features simultaneous control of characters if playing as the Swan Siblings. The difference—and the current problem—with LA Cops is that it uses an isometric view and an orbiting camera controlled by the player. Shooting feels panicked but powerful. Preemptively carving up rooms through tactical analysis is satisfying. It’s the choppy visibility that sometimes fails to connect the two.

It can mean that you are shot in the back when moving into a room as the camera angle hid a henchman behind a wall. Sometimes shots that seem on target aren’t. Again, this is due to the failings of the camera system. Ironically, it’s the incompatibility between you and the game’s camera that becomes the best homage to the conflicted partnerships of buddy cop shows. But no, this isn’t an issue that can be brushed off with a joke, or even an “I’m too old for this…” Luckily, this is known.

“3D games are always tricky by their very nature of being a 3D world on a 2D screen. At the moment we’re looking at having identifiers above enemies’ heads that always show the player where the enemy is in the game. The camera can also be tweaked per level so we’re still playing around with the height and angles to ensure the player can see where the enemies are.”

If Modern Dream can patch over these holes then there’s room to work on expanding upon the game’s strengths. Clarke says that there could even be more game modes in the future to further explore specific scenarios. The example given is the “Swarm” mode, in which the player must ensure their cops are positioned in the right places to cover each other. Essentially, it’s a more intense shootout than what the rest of the game offers, and one that puts the partnership under its greatest duress.

But currently, and somewhat appropriately, Hotline Miami and Syndicate are experiencing a rough start to their forced team-up. The disruption demands all of Modern Dream’s attention and is preventing progression elsewhere. Perhaps, after a cup of coffee and a heart-to-heart, they’ll get to understand each other’s differences and work as a proper duo. If that can’t happen then, well, we all know what must happen. It’d be time for one of them to hand over their badge.