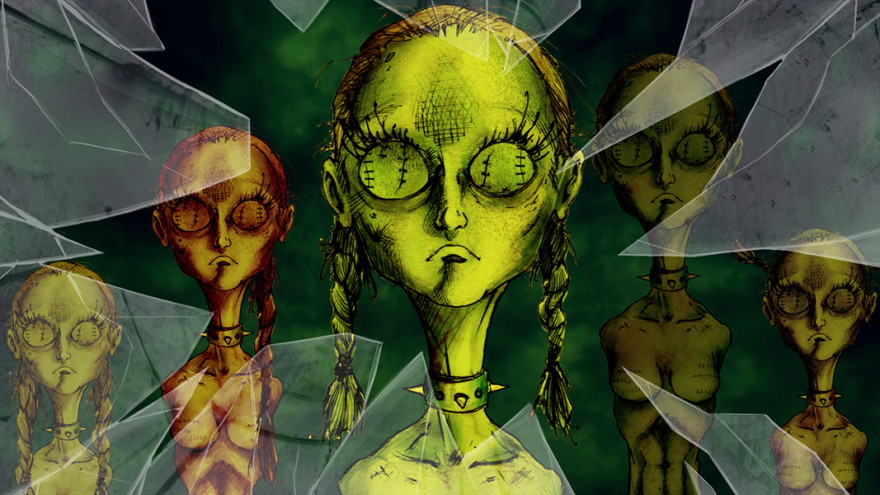 Before I can even begin to think about The Lady as a game, I have to wonder first if a game can be unplayable—and if so, can an accurate review be given?

When I use the word “unplayable,” I don’t mean that the game is broken and is impossible to finish in any capacity. The Lady works the way it’s supposed to and is coded with a specific amount of confusion in mind. As the titular Lady, the player has to get through each surreal level using a different tactic that’s not always obvious, especially in the beginning, where the falling glass and abrupt changes of scenery are still surprising. However, the developer put in details that make the game virtually impossible. The first level just features the Lady walking around a blank room with falling glass, for instance. The player is given some controls to start with, including ones that allow you to “shoot” at objects such as the falling glass. During my first few attempts at this level, I either died after getting hit, or the game would (as I later found out) intentionally freeze and crash, forcing me to start over. I had to email developer Michael Patrick Rogers about this issue and was later told that I had to actually avoid the falling glass instead of shooting at it and that the game was in fact punishing me for interacting with it.

The developer put in details that make the game virtually impossible.

For a game about depression, this makes sense as a self-harm allegory. The player is punished for interacting with objects such as falling glass, or in a more obtuse way, cutting. The Lady is covered in scars that create an uncomfortable juxtaposition with all this glass. She has no arms and just walks around shaking her head, which is the only way she can try and touch the environment and even then, you’re discouraged for doing so. However, this detail is only noticeable if you know the avoidance trick—so who is it there for?

The dissonance and outright obscurity don’t end there. The level designs are interesting enough, but strategies refuse to cohere from one level to the next. In one you’re expected to avoid any hazardous objects, but in others you are encouraged to shoot. Then you suddenly find yourself in a Space Invaders–inspired level; it’s hard to take the game at its word. In another way, the Lady herself is both human and not: an amputated, sleepy-eyed figure pictured from the torso upwards. The player looks at her and sees a person, but they also keep their distance, not wanting to be pictured as the forlorn creature on the screen. The attention to detail on her design is startling, especially when you first see her. Her torso moves as if it detached from the rest of her, and her bones protrude at unrealistic angles, highlighting just how large her eyes are. She straddles the border of being too alien, but at the same time, there is empathy towards her deformities and the physical pain that she is put through.

Rogers says the game is supposed to resemble classic NES titles in their purposeful difficulty and vagueness. We see this directly in the game’s controls, its side-scrolling level design, and its obfuscated tutorial. The game, however, also takes cues from more recent ambiguous games, such as Proteus and Dear Esther, which take away all goal-based aspects. The Lady, similarly, is more of an interactive experience where the player has to traverse eerie levels to work towards an undefined something—relief, possibly. The Lady is tortured for the entirety of the game and no amount of determination or optimism can lift her up and ease the pain. The last image the player sees (if they’re able to complete the game) doesn’t add itself to either a positive or negative interpretation, but rather just works to confound the player and make you question what it was all for.

As a metaphor for dealing with depression, The Lady works. The score is grating and painful and the creature designs—all big eyes and insane bone structures—unsettle. There’s also the lack of any guidance for what you’re actually getting yourself into, which adds itself to the dissociative qualities of depression or anxiety. But is this bewilderment in the game’s favor? The intentional impossibility of the game goes beyond just difficulty. I almost gave up entirely, for example.

But then I look at The Lady with her red eyes and the scars on her chest and for a second the game’s impenetrability doesn’t matter. Her design is almost worth the hour or so the game will take to get through, after initial struggles. The Lady looks through the broken screen at me, and, for a moment, it’s worth it.