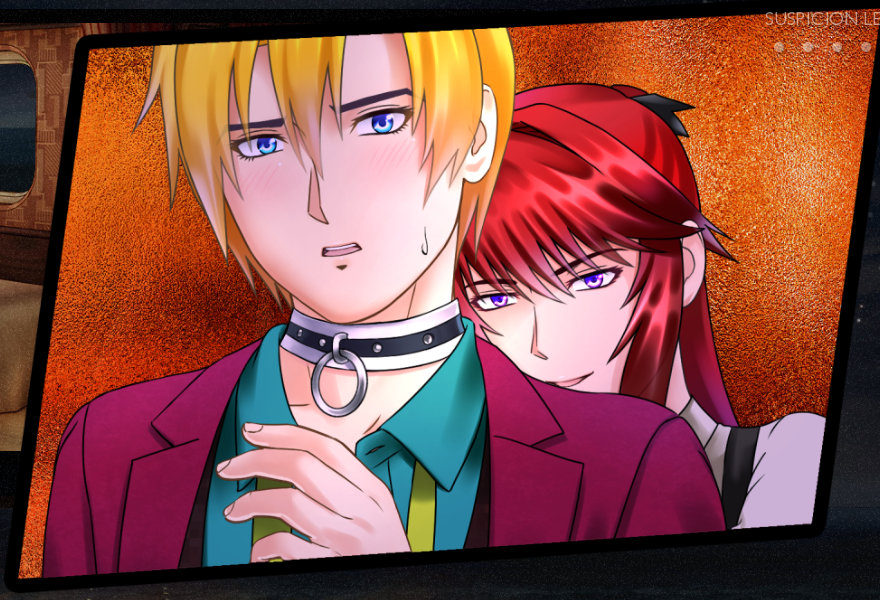 Title:
Ladykiller in a Bind

You lie on your bed, idly, unsure of what is keeping you up. It’s something that wants to stay hidden, just out of sight of your mind’s eye, a shadow ducking out of your periphery—the flash of a sly smirk as it flits around your room. While the thing on your mind dodges investigation, your hands nervously fiddle with your skirt, anxious to make your brain comply with what you want it to do. Your gaze wanders from your legs to your laptop a few inches away. You had just been on it, in a virtual world, only 20 minutes ago, playing a game…

Then it hits you. All at once, like an ass being smacked with a cane—you realize what was on your mind while you idled, wasting time, on your bed sheets. Of all things, a videogame. Or, more specifically, a character in a videogame, which is an even bigger rarity. So few videogame characters can even be considered “characters” in the literary sense, barely occupying your mind while on screen, let alone in the real world. But the person on your mind, the crush that had been evading your inner gaze, is so unshakably human that you find yourself giggling like she’s Leonardo Dicaprio circa 1997.

Your eyes open: the hair is gone, the taste of her name evaporates, the scent of home turns acidic. All you’re left with is the distinct embarrassment of realizing you’ve been crushing on an anime character. But it feels like more than that. The most delicious part is that it feels like the love you share with yourself—like flirting with your reflection in the mirror. You don’t want Princess; you are Princess, and what she brings out in you. You don’t love her for being a fantasy. You love her for seeing you, for making you see yourself.

Ladykiller in a Bind is a game about labels. Every time a character is introduced, the player has the option to call them one of two pre-scripted nicknames, or create their own. All the pre-scripted nicknames harken back to a romantic fantasy or “type” of kink—this is an erotic visual novel, after all. Christine Love and the Love Conquers All team set out to explore a story of lesbian cross-dressing and BDSM-infused social manipulation. You play as “The Beast,” AKA “The Hero,” who decides to take over her twin brother’s identity during his senior class cruise—only to proceed to fuck every one of his classmates.

The summary of Ladykiller in a Bind should already give a sense for how central labels are to its story. Just look at the game’s main page, where you’ll find a summary of each character beside a chart indicating their pension for “crossdressing,” “lies,” “fashion,” “status,” “social class,” “sluttiness,” and “height.” If it were a weaker game, Ladykiller in a Bind would very easily get lost in the cross-hair of these labels, as an apparent representative for entire communities ranging from LGBTQ to BDSM. Luckily, the game navigates players beyond the terms, rules, and play of sexual orientation, to instead anchor them in what lies behind the words: a human being.

You spend your days on the cruise interacting with various characters, participating in a “game” that reduces popularity to points (basically if social media was IRL). Before picking each scene, you are given all the information you might need about how the interaction might affect your score—potential points, versus potential suspicions raised about your true identity.

the pre-scripted nicknames harken back to a romantic fantasy

But as night falls over the ship, your options reduce to only two polarizing romantic relationships: a partner with whom you play the dominant, and another where you are the submissive. As dominant, you turn a red-haired computer geek running the technology behind the game into your pet. She’s all sweetness and zero sluttiness, but boy do you make her question those two core characteristics. “The Hacker,” AKA “The Stalker,” has been crushing on you for a very long time and, lucky for her, you’re the type who likes to watch an overexcited submissive squirm and plead for you. One night with The Hacker awards you three votes—that is, if you’re a player who cares about winning the game. Other players can opt into a different route, foregoing the potential points in order to play with the dominant character. “The Princess,” (AKA “The Beauty” to your Beast), on the other hand, is a sadistic ruler who luxuriates in the tears of the victims she leaves tied up and wanting. She loves hearing you lose control, until you submit to every form of physical torture she desires just to earn her touch. Being the plaything of an all-powerful Princess has its perks, too, like how she can wave away people’s suspicions about you with a simple text message, giving you a clean slate in the morning.

Yet, for every sexual victory Ladykiller in a Bind pulls over you, it has a corresponding medicine to feed you. The opening screen coldly declares that, “All power exchange must be negotiated: That is to say, there’s nothing more important than clearly communicating your desire and limits in advance, without either party feeling uncomfortable or pressured.” Which is a very boring, unfeeling way of telling you about the game’s most incredible accomplishments. Ladykiller is a game with the guts to stare you straight in the eye, a small smirk playing on the corner of its lips, to ask plainly: what do you like? It recontextualizes the word consent, which is so rarely discussed outside the question of its devastating violation. Because consent is sexy in Ladykiller in a Bind, and not in that faux, campaign slogan kind of way.

In the two central relationships between The Hacker and The Princess, every word exchanged is about desires and limits; and it’s hot. The most titillating parts show nothing more and nothing less than two people consenting, telling each other what they want with an unwavering honesty and understanding. It’s a real shame, because the game does such a good job of tackling consent from a sideways angle—only to greet players with a loading screen with the game’s most boring and ineffective sentences. Most conversations about consent treat it like a ticking time bomb, with the words “negotiated” and “party” inspiring the desire to put on a business suit rather than undress and lay yourself bare. But rather than treat consent like a ginger, precarious hassle, Ladykiller shows it for what it truly is: good sex.

At its best, the game gives players agency and rules and lets them find themselves within those constraints. Devoid of expectations from its audiences (and constituents), Ladykiller gives itself over to you, all nakedness and beauty. But at its worst, it’s a game about consent, feminism, and LGBTQ issues, playing lip service to concepts that others have already turned into a mindless chant inside your head. On rare occasions, it reaches for the soapbox in a way that undermines its implicit lessons. “This doesn’t have to follow some stupid script where we start making out and end with penetrative sex as a forgone conclusion,” you say to The Hacker, following the script with foregone conclusions that you were given. Because the first thing that springs to your mouth in the middle of a heated bedroom encounter would, of course, be the dictionary definition of consensual sex.

the national anthem for sluts everywhere

For the most part, Ladykiller in a Bind dares to be unapologetically itself rather than a game made for any one set of people. You may be tempted, like me, to dismiss the game as simply, “not for you,” because you are either cis or not into BDSM. That assumption in itself warrants serious introspection, and Ladykiller isn’t shy about helping you confront it. The game oozes a magnetic confidence, from its sound design to its narrative tone—which is at once playful and intelligent. The game’s sheer existence as the story of a sex-crazed girl who loves manipulating people is enough to make it the national anthem for sluts everywhere. Like Amazon’s recent BBC expat, Fleabag, it brings visibility to the oft fetishized yet hardly ever genuinely explored story of a woman who thinks she can fuck away all her problems. Sex isn’t so much what makes the protagonist sexy, but rather what’s most terrifying and beastly about her—and also so very human.