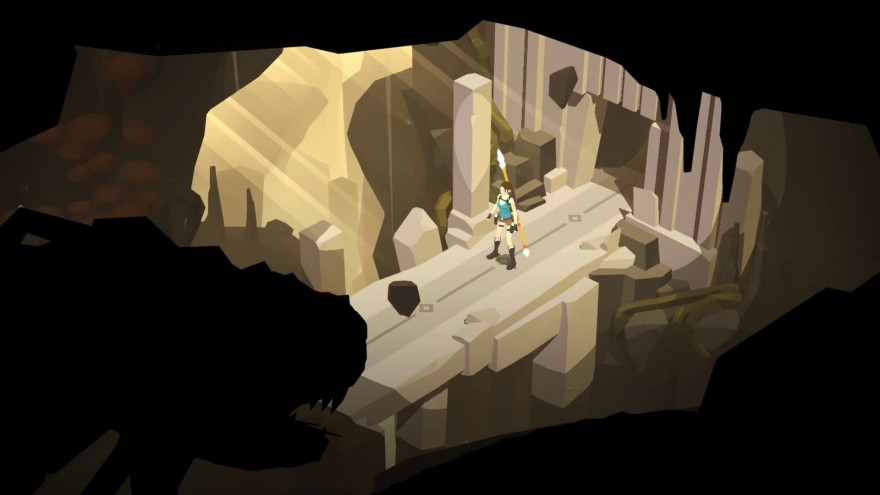 In 2013, the Tomb Raider reboot gave us the origin story of a young Lara Croft running, gunning, and nearly being snuff film’d for its 10-hour duration, with a scant few tombs to actually  raid. We watched as she embarked on her journey as a naive college student, emerged from a shipwreck and ultimately became a fearless worldwide explorer. The focus was, despite its name, not on the tombs but on the person who would eventually raid them.

Paradoxically, the new Lara Croft Go has practically nothing to say about Lara as a person, despite its name. She does however, tile-by-tile, silently raid the shit outta some tombs, at least.

Lara collects artifacts that no doubt belong in museums, dodges epic monsters, slays vicious beasts, and flips countless switches. She jumps from space to space on the predetermined paths through each level while wielding her signature dual pistols. Generally speaking, she’s everything we’ve come to expect of Lara Croft, sans the messy interrogation of the avatar’s humanity.

This mechanical essentialization, though, has precedent. In 2014, Square Enix quietly released Hitman Go, which placed the stealth series into a subdued, stylish, almost zen-like boardgame environment that could only be experienced via smartphone or tablet. Missions that previously sent the player dossiers on targets in exotic locales filled with henchmen were miniaturized into the contents of an elaborate dioramas, filled with minute details surrounded by literal pawns on a board.

Without any friction to the player’s actions, the game’s title becomes a suggestion rather than a command.

Despite excising the bulk of the trappings that have come to define modern gaming—dialogue trees, leaden plotlines complete with Nolan North-voiced villains, etc.—Square Enix’s Go series attempts nail that sweet spot of nostalgia that nudges players into revisiting these decades-old series in the first place. Yes, we’ve learned the hardship and pain that empowered young Lara to pick up arms and fight, but boiled down to its essentials, this was a series based on the mystery and wonder of delving into dank caves and exploring strange locales.

It’s an idea explored in recent top-down, co-op spinoff games like Temple of Osiris and Guardian of Light, but the highly polished presentation and pocket-sized feel of Lara Croft Go feels closer to the quieter sense of exploration hinted at in the game’s title. There’s a touch of nostalgic amusement in unearthing riches from ancient ruins while narrowly getting into and out of scrapes with an escalating series of enemies, even if the entire experience is encased in a rigid series of move-by-move puzzles.

That airtight focus on puzzling that leaves little room for actual exploration, however. Each level treats us to a level of environmental detail that seems to nod toward polished iOS jewels like Monument Valley, with climbable cliffs and overhangs that encourage the player to think in terms of vertical space as well as horizontal. Levels take place amidst lush greenery, crumbling ruins and dank, torch-lit caves, but outside of tapping on each level’s treasures (something of a hidden-object minigame on each stage), there’s not much reason to pay attention to your surroundings. Swiping Hitman Go’s miniature dioramas tilted and rotated the environment, letting you take in the tiny craftsmanship at work, yet there’s no control over camera angles at work here, keeping the detailed settings at arm’s length. Raiding a tomb usually takes more than a cursory glance.

Another feature excised from Hitman Go is level-by-level goals dependent on finishing quickly; the pressure to find the absolute shortest method to dispatching foes gave an importance to every move on the board. Without those limits, what could be a thrilling chase from monstrous beasts and deadly blades becomes a leisurely stroll through the jungle. Without any friction to the player’s actions, the game’s title becomes a suggestion rather than a command.

For such a beautiful package (not to mention the game’s tasteful electronic soundtrack), Lara Croft Go stripped out so much of what makes the series memorable, there’s not much to grab on to. We swipe, swipe, tap, and swipe through these tombs to help Lara reach the exit in yet another cave, but after one push on the phone’s lock button, it’s hard to remember why you were there at all. There’s nothing to latch onto.