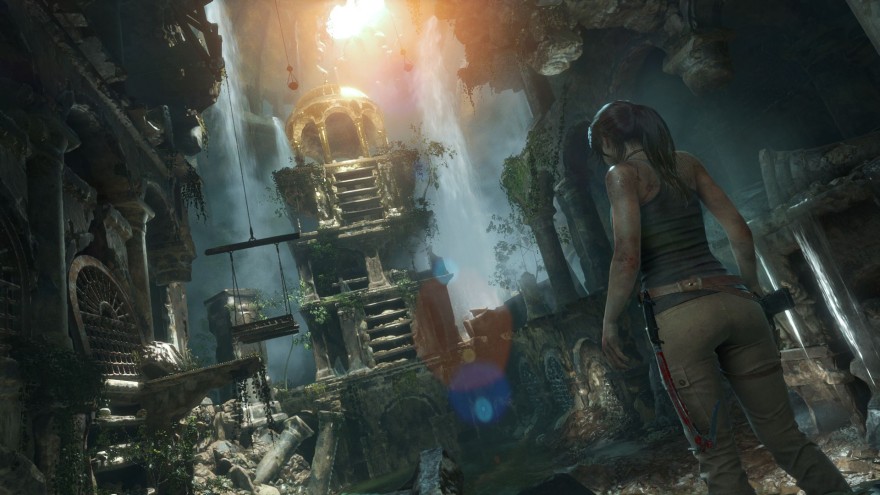 The new Rise of the Tomb Raider footage from Gamescom has gotten a lot of attention for depicting Lara doing some pretty gruesome stuff. She uses a kitchen knife to tenderize a dude’s neck, bludgeons another bro with a bottle, then somehow accurately fires two arrows at once into as many oblivious heads gathered round a campfire. After the outcry over the E3 trailer, which put the iconic character on a therapist’s couch, no one can declare this version of Lara “sexist” for being “too weak.” The woman seen here is practically ripping out the throats of her male enemies with her bare teeth, turning to the camera with a mouth full of blood to shout “Who’s weak now, bitch?”

But, really, Lara’s ultra-violence feels neither offensive nor particularly novel. In fact I’m almost positive she went to the same exact Generic Far Cry Protagonist boot camp as What’s His Face and Bro Dude, whose “trauma” from finding themselves in such hostile territory gets swept under the rug whenever convenient to the plot. No, Lara’s viciousness didn’t concern me. But the fact that she apparently brought bare civilian’s clothing to a military battle did.

Because despite the fact that Lara decimates every enemy she encounters, one can’t help but notice a fundamental difference between her and her targets. While the guards she kills pack Halo-esque future-armor with bullet proof vests, helmets, and flame throwers, Lara Croft traipses about with spaghetti straps, a bow, and a high pony tail (side note: what the hell kind of hair spray does Lara Croft use to keep that thing so goddamn perfect? I mean, come on, not a single flyaway after all that crawling, stabbing, and rolling around in the dirt? I call bullshit). It’s not that Lara looks unprotected while facing off against such hulking, well-prepared enemies. She looks plainly foolhardy, relying on the protection of what might as well be a 100% cotton tee to ward off stray bullets or any out-of-control flame.

It’s a different kind of ridiculous than the last Tomb Raider, where Lara’s shivering spells inevitably begged the question, “Can’t the poor girl just borrow someone’s coat?” She was the opposite Lara to the one we saw way back in Tomb Raider II, who didn’t think to match a warm winter coat with a pair of trousers when traipsing around snowy Tibet, or Tomb Raider III‘s Lara who visited Antarctica but couldn’t give up the cleavage. When it comes to attire, it appears Lara continues to be incapable of catching a break even decades after her booty shorts went out of style.

Despite all the brave changes Crystal Dynamics made to reboot Lara in a more progressive light, their decision to keep her underdressed remains one of the most painfully obvious and aesthetically nonsensical ones. I mean, for god’s sake, she encounters a man with the power of fire at his fingertips. It might just be me, but I think she’s gonna need more than a “finesse” skill upgrade. Like, maybe a flame retardant upgrade? Or, uhm, a vest?