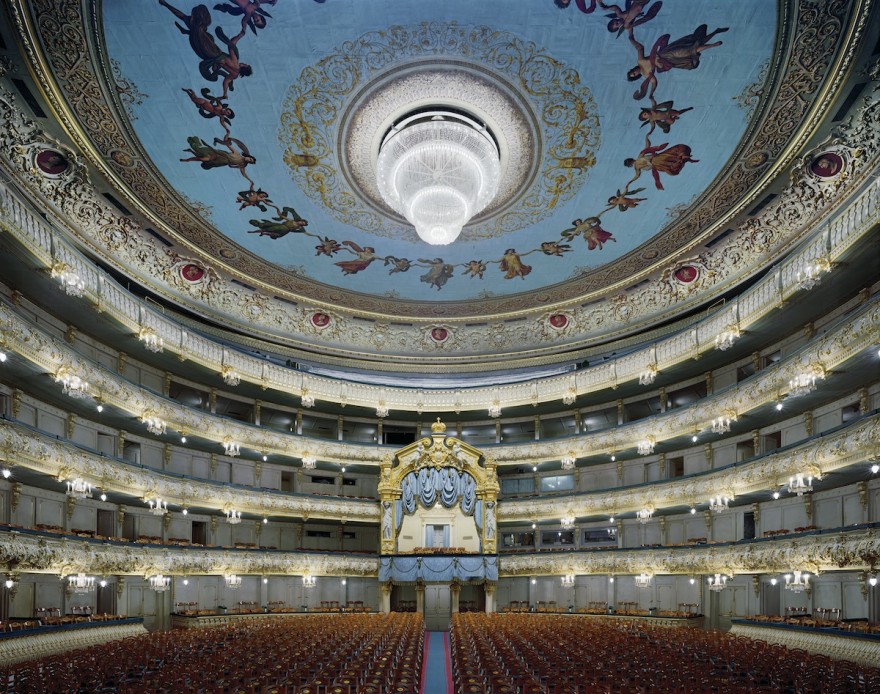 If you’ve ever wanted to see the grandeur of an opera house in awe-inspiring, larger-than-life color and detail, New York City-based photographer David Leventi’s photographs will have you reeling. Leventi captured the inside of famous, virtually empty opera houses, from the Metropolitan Opera in New York City to the Palais Garnier in Paris (the inspiration behind Phantom of the Opera). Leventi allows his audience to explore places they may never have the chance to see, offering every perk of looking at it with their own eyes.

According to a statement released by Leventi on his website, Leventi’s grandfather Anton Gutman, who trained under Helge Rosvaenge, a famous Danish tenor, served as the inspiration for Leventi’s photographic series “Opera.” Gutman performed for guards and prisoners alike when he was held captive in a Soviet Union prisoner-of-war camp; later, he captivated Leventi as he sang and walked around the living room. These opera houses serve as symbols for the places he never had the chance to perform in.

Up close-and-personal with the hyper-detailed photos, captured by high-definition precision Arca-Swiss cameras, the viewer is able to see the vastness of the Marlinksy Theatre in Saint Petersburg and how the drapery matches the skylight painted above. With most photos captured from center-stage, the viewer also receives the same view as those performing, the number of seats intimidating, but the emptiness exploring a pervading sense of loneliness and tranquility. Leventi stated, on his website, he experiences “an almost religious feeling walking into a grand space such as an opera house.”

The detailed paintings the wide ceilings of many of the opera houses are reminiscent of Michelangelo’s Sistine Chapel, with angelic figures and cherubs floating above patrons. In a similar fashion, the Vatican also offers virtual 3D tours of the Sistine Chapel for anyone who is interested in viewing the Chapel without the travel.

Leventi recently finished working on “Palazzi,” a collection of photographs of the interior of Venetian palaces, serving as a follow-up to “Opera.” And, yet again, it allows the viewer to explore places they may never get to see, in a way not commonly seen by those who do get to visit these places. This collection expresses the same sense of vast halls meant to be filled with people, bare of any living object. In a similar vein as the opera houses, the lighting and arrangement of chairs provides a somber, ghostly mood for the viewer. To me, it offers a sense of relaxation from the hustle-and-bustle of everyday life.

The rest of Leventi’s work, ranging from empty prison cells and sports arenas to landscapes and everyday life captures of New York City and Romania, can be seen on his website. Updates of his work, and what he’s been working on, can be found on his blog.