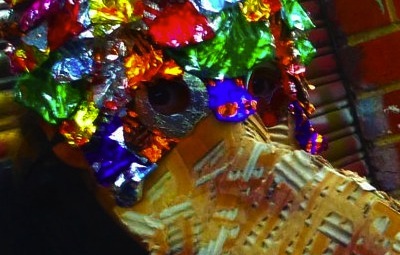 A live-action, interactive parade into the spirit world is being hosted this weekend in Melborne as part of Pop-Up Playground’s Fresh Air Festival. Called Spirits Walk, the gist of this otherworldly street game is that participants will take to the streets for some good old-fashioned LARPing, but with a fascinating scenario inspired by magic realism, ditching the traditional association with middle-earthen stereotypes.

Spirits Walk is more about surreal theatrical exaggeration, or doing weird stuff in public and feeling weird doing it—i.e. the story of my life. It also involves wearing gorgeously strange masks and handing out tokens of “distilled energy.” It sounds pretty similar to Mardi Gras in the States, but is the rest of the world not entitled to quasi-pagan freak-outs?

I think so, and so does the game’s creator Grant Howitt, who normally doesn’t make games quite this far out of societal boundaries. “My normal stuff is zombies and shotguns and running and screaming and adrenaline, by the way, or disco-dancing, or stealing sweets whilst wearing a bandit mask,” he wrote on his blog Look, Robot, where you can read more about his fascinating project.