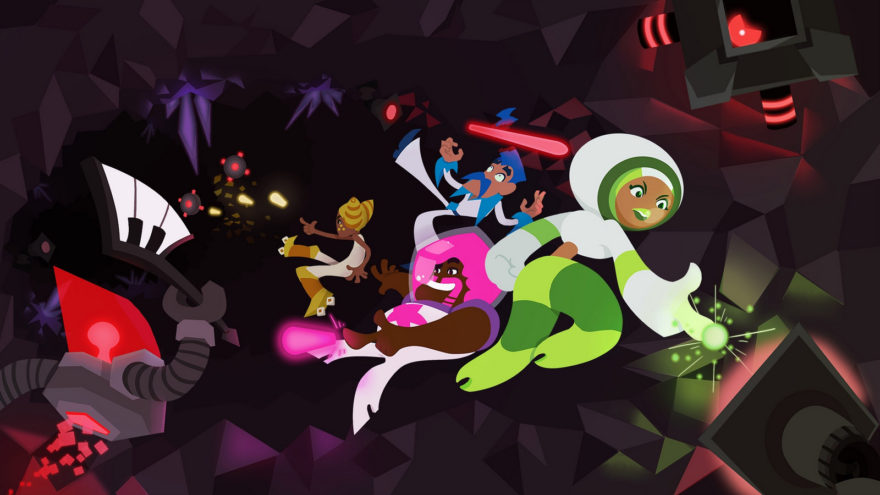 Laser Disco Defenders is defined by ‘70s Star Wars knock-offs—the kookier, the better. We’re talking films like Star Crash (1979) and Buck Rogers (1979); movies that might as well have had their robot characters made out of tinfoil. Only, for the purposes of describing the game, imagine those movies set to a fly disco soundtrack, daddio.

Creator Alexander Birke had always been interested in creating a videogame with a b-movie feel, and disco felt like a natural pairing. After all, Star Wars’s success in the ‘70s catapulted science fiction to the forefront, and even disco got in on it. Hence we have Laser Disco Defenders. The mish-mash aesthetic is something Birke stuck to diligently while he was making the game—he even has a fascinating document full of inspirations that guided him along.

This is why the main challenge is to dodge procedurally-generated obstacles, like turntable turrets that shoot colorful laser beams. Each character can shoot laser beams, too, but you’ll want to plan that carefully. Laser Disco Defenders is a self-inflicted bullet hell, meaning that “friendly” bullets will bounce back and hit players.


The game’s lead character, Mr. Baker, is an homage to disco’s deep roots in African American history, “with the TV program Soul Train being the center pivot for the genre,” Birke said—though Mr. Baker is actually named after German disco group Boney M.’s Ma Baker. “Originally [the lead] was Tommy, who is named after Tommy Seebach, a Danish disco star where I’m from,” Birke added. “But as we got the characters more developed, it was clear that Mr. Baker had to be the lead given the inspiration of the game and how groovy he turned out to be.”

There are four playable characters total—Mr. Baker, Donna, Tommy, and Liz—and each is equally funky; something that is not only entrenched in the aesthetic, but the game’s action, too. Players can customize their characters with a selection of groovy, space-age accessories that each have an affect on how the characters play. In its current iteration, Laser Disco Defenders offers 108 different outfit combinations—ranging from a silver space suit and casual platform shoes, to moon boots and a gold medallion.

“I’m hoping that the players will not only pick a character and outfit based on how it plays, but also on the look they like most,” Birke said. “Fashion was a big part of the disco fever, so I also wanted that to be reflected in the game.”

Laser Disco Defenders will be out for PlayStation Vita on July 26. It’ll also be out on PlayStation 4 later this year, and will be cross-buy on both platforms.