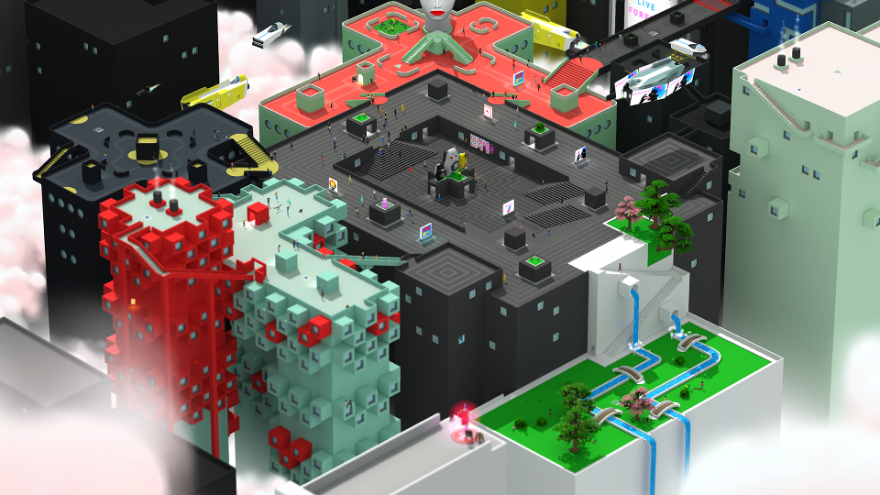 Apparently it’s not enough to simply sit and stare at the neat blocks of color that make up the future metropolis of Tokyo 42 (as I spent most of my time doing when I last wrote about it). We need to pay attention to what you can do in these elevated city islands too.

That’s the focus of the latest video released by publisher Mode 7, who says “the game has attracted a bit of a following due to its art style, but now we really want to delve into the gameplay and show people that it plays as nicely as it looks.” Okay, sure, do that, but you can’t stop me getting sidetracked by a particularly neat arrangement of staircases, or the contrasting greens and reds of a pair of cube-apartment tower blocks.

The video is below and comes in at under four minutes so you’ve no good excuse not to give it some of your time. It shows three different ways you could approach infiltrating a single area in one of the game’s missions. Broadly speaking, those approaches are stealth by way of katana, combative with grenade and minigun, and a slightly more smart mix of the two.


While Tokyo 42 does have established “cool” action game features like bullet physics, jumping with air control, and stealthy evasion, the aspect that appeals to me most is found in its crowd simulation. Notice that in the video above it’s mentioned that you can “change your skin,” which is exactly what is sounds like: you can instantly change your appearance so that you can move invisibly past the guards hunting for you. It’s the kind of thing Assassin’s Creed tried to pull off by letting you commit a murder and then slip away into a walking formation of white-cloaked monks.

There’s a bit more flexibility to it in Tokyo 42 as it seems you can change your skin and try to blend in with the pedestrian crowds at any time. Obviously you do need to hide somewhere in order to change your skin but that’s the only big requirement. It’s a neat feature and is probably the most cyberpunk part of the game, besting even the small environmental details like the Jetsons-style cars and moving billboards.

Mode 7 makes a note of how good the skin-changing ability can be in another of the game’s modes (outside of the single player they’ve shown off so far). “A multiplayer arena mode adds a Where’s Wally-slash-Waldo-for-other-territories dimension: change your skin and blend in with the crowd, then explode into view with a flurry of overly ambitious rockets,” Mode 7 wrote. That’s the kind of tactic I know I’ll be exploiting when I get around to playing it.

And when that might be? There’s no specific date outside of 2017 still, but at least we know it’ll be coming to PC, Xbox One, and PlayStation 4. Oh, and by the way, if you have a careful eye you can spot cats wandering the city in Tokyo 42 (I’m not talking about the large cat statue, but actual cats). That’s my kind of feature.