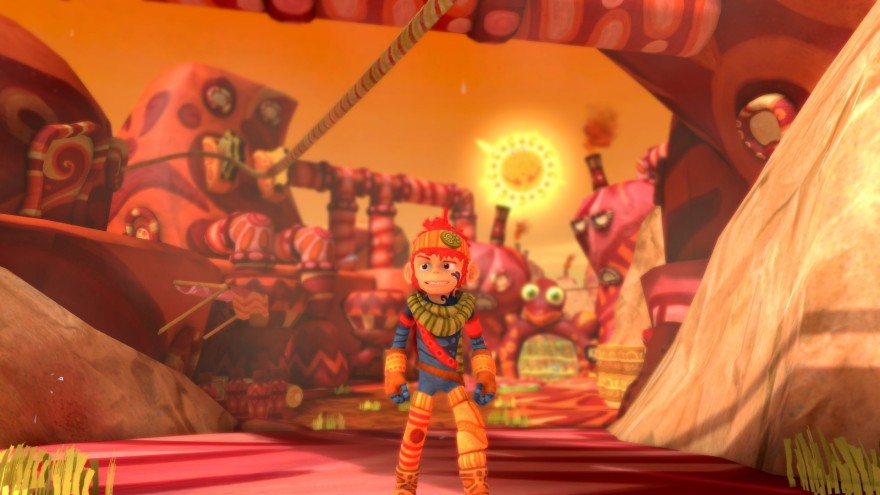 It wasn’t long ago that people thought all videogames were for kids. A few DOOM-fuelled moral panics later and it became a bit clearer that games were moving beyond the Saturday morning cartoon aesthetic of their arcade roots to explore other territories. Before a real schism between “mature” and “children’s” games set in, though, there was a lengthy period of time when many of the best developers in the industry were focused on creating experiences that appealed to older audiences on the strength of good design while still being colorful enough to stay kid-friendly. The resulting games—ones like Super Mario 64, Jak and Daxter, and Banjo-Kazooie—are classics: artifacts from an era when videogames were largely meant for an all-ages audience. Mimimi Productions’ The Last Tinker: City of Colors is a conscious effort to return to that time.

The Last Tinker is a game about a city of color-coded people instituting color-coded segregation that leads to color-coded prejudices. Its hero, a Journey to the West-styled monkeyman named Koru, is mostly just irritated by the fantastical racism of his neighbours until a wave of greyscale terror washes over his hometown and saps away its color. This “bleakness” threatens to wipe out his home, prompting a quest to reunite the people of Colortown and eliminate the danger. That none of this is particularly thought-provoking isn’t an issue. Colortown and its red, green, and blue populace work well enough as a Seussian metaphor for the evils of discrimination. And restoring a series of white-washed levels to their vibrant, pre-catastrophe state provides a satisfying way to visually mark progression through Koru’s otherwise straightforward hero’s journey. But it’s outside of the storybook plot and characters that The Last Tinker falls down.

For a game all about running, jumping, and beating up enemies, Koru’s movement feels pretty listless. Punching out The Last Tinker’s waves of ghostly-looking monsters lacks any kind of oomph and the combat system itself, for all its requisite upgradeable moves and unlockable special powers, isn’t really exciting enough to warrant the frequent brawls that intersperse level exploration. The parkour platform jumping is similarly limp. Koru glides from platform to platform so effortlessly that the player’s input barely feels consequential. On the one hand, this auto-pilot control style helps to make The Last Tinker more accessible—a good goal for a game meant to be enjoyed by kids. On the other, not forcing the player to hone their reflexes throughout the levels takes away the sense of accomplishment that made older mascot platformers what they were. As potentially frustrating as nailing a tough jumping puzzle in Banjo-Kazooie could be, pulling it off was satisfying. Fighting off enemies as Spyro or Jak could be tough, but working through a roomful of opponents made playing these games memorable. Perseverance (and the development of new skills) is an essential part of the best all-ages games. Without it, everything ends up feeling hollow. This is a bit of a shame since the world of The Last Tinker—a series of mountains, caves, and deserted villages—is imaginative enough to inspire a sense of wonder.

When it comes time to actually interact with these places, though, it’s only the strong art direction and a number of choice soundtrack instrumentals—mostly the sort of breezy guitar plucking and whimsical string arrangements you don’t mind hearing loop endlessly—that maintain that liveliness. A section midway through the game that tasks Koru with scaling an enormous windmill exemplifies this problem. At first, staring up at the top of the huge structure from its base, the ascent seems thrilling. Half an hour of light puzzle-solving, free-run platforming, and monster smacking later and the design has betrayed an underwhelming core. The exhilaration only resurfaces once these chores are out of the way and the player is left to complete the climb to the accompaniment of stirring, increasingly urgent music and the unfolding of an impressive vista that displays just how far from the ground Koru has come.

The best all-ages games attracted young and older audiences alike because—colorful mascot characters and simple stories aside—they were a joy to interact with. Whether you care about the finer points of Mario’s story or not, anyone who controls him for a few minutes can understand the appeal of playing his games. The Last Tinker, despite nailing the aesthetic of the games that inspired it, doesn’t have this strength. For every one of its lovely vistas there is an unsatisfying bit of platforming to be done; for every quirky character there is a group of enemies at which to swing some floaty punches.

Forays into the mascot-centred, all-ages past of videogames aren’t an inherently bad idea. There is still plenty of room for games that eschew narrative and mechanical sophistication in favor of refined but accessible gameplay. But these criteria have to be met in order for the genre to succeed. The Last Tinker doesn’t play poorly, just unremarkably. And for the type of game it aspires to be—one that sets itself the uneviable task of recapturing the spirit of a genre’s golden age—an experience that is ”just good enough” can feel a bit underwhelming.