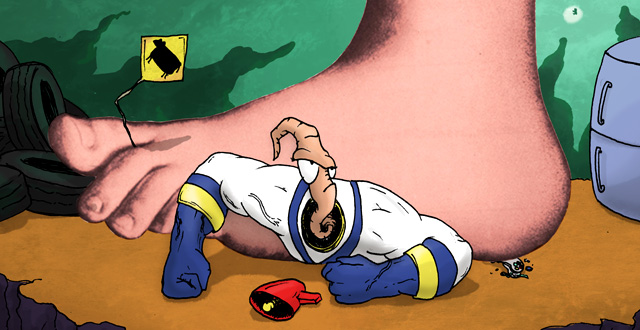 For the designer behind the most outrageous platformer of the fourth generation, Doug TenNapel is surprisingly puritanical about the role of comedy in videogames. Earthworm Jim, co-created by TenNapel and released in ’94, shook up the medium with its surreal style, darkly comic tone, self-knowing satire and preoccupation with cow-launching, and led to outstanding reviews, two sequels, and a television show. But for all his game’s visual dynamism, TenNapel, a graphic novelist by trade, says it is the gameplay that supersedes all other elements, including laughs. TenNapel’s stepped away from games for the moment to work on the online comic Ratfist, but still has strong opinions on games: a space, he believes, of visual limitations but artistic possibilities.

Unlike many other games, Earthworm Jim began at the character-design level. You’ve said Jim started as a simple sketch of a worm that you brought to Shiny Entertainment. What changes do you have to make when these simple sketches become complex videogames?

The point of view is the biggest problem with games, because what we play must be clearly presented in the best way for me to have an immersive game experience. How do you make an over-the-shoulder character funny when you’re looking at his back most of the game? When we go to see comedians or funny movies they don’t address the wall behind them; they face us. This is why a game’s first job is to entertain through gameplay and secondarily through humor, drama, or other traditional entertainment devices. The humor has to be a gentleman. I mean, it needs to be squeezed in around the game. A character can say things while he’s running around; or he can visit a funny location; we can rely on the comedic standards of exaggeration, irony, and slapstick. Small bursts of humor work the best in games.

When I spoke with Ron Gilbert, he said videogame comedy suffers by handing over timing to the players. How much do you consider timing when working on a game?

These are not passive forms of entertainment, so interactivity will almost always be in conflict with presenting content rooted in passive observation. When I play a game, I want to play, not necessarily laugh. If you try to make me laugh at the expense of interactivity, then you’ve just created another funny game that isn’t very fun. The videogame medium itself is a terrible place for complicated humor, drama, and character development. We have other mediums that do those things better, so why not concentrate on what games do better than any other medium?­

How do you make an over-the-shoulder character funny when you’re looking at his back most of the game?

Earthworm Jim is marked by a surreal, darkly comic style. What were your guiding principles when creating this larger world of Jim’s, with characters like “Queen Slug-For-A-Butt?”

Earthworm Jim humor is a difficult tightrope of satire, innocence, and non-sequitur humor. It’s really hard to get it right, and it wasn’t until I saw competent creators take over Earthworm Jim 3D and ruin the heck out of it that I realized just how close I was to Jim’s comedic DNA. You can come up with a porcupine in a military outfit and it’s dead wrong; then come up with a cat that is so evil he’s taken over Hell, and be dead on. The guiding principle is just a matter of taste and style.

The game feels like a satire of videogame archetypes in 1994—for example, naming the disposable princess character “What’s Her Name?” How critical were you of previous games when you were designing yours?

The Europeans we were working with had already been making games a lot longer than we Americans, so the monotony of an entrenched-princess cliché was a lot more apparent to them. Because [Jim] was a satirical character, we could make fun of just about anything, including these long-stale gaming conventions. The key to Earthworm Jim was that we were cut loose to make our own game for the first time. We had all done multiple license games for everyone from Disney to 7UP, so we were confined to a lot of content limitations. So we got to finally make our own thing, and I think Jim reflected the energy of the eight Shiny [the studio behind EWJ] guys at that period in our life. We listened to Monty Python CDs, loved They Might Be Giants, Beastie Boys, and Weird Al; so I think a lot of influences were trickling into our tastes at the time.

How did you prevent Earthworm Jim itself from falling into those same “stale” conventions?

First and foremost, Earthworm Jim is a great game. Most platforms get that part wrong, so that no matter how much amazing content you put in that game, nobody is going to care. Even if you hated all of his character attributes, you’d be getting your money’s worth on the gameplay. So the humor in Jim was always going to make an A game an A-plus.

A ton of absurd, funny platformer characters were introduced around the same time as Earthworm Jim, or shortly after: Crash Bandicoot, Blasto, Banjo-Kazooie. What started this trend?

Hands-down it was the influence of the Ninja Turtles. Before they came along there really wasn’t such a thing as a cartoon character that was a hero, was funny, but took their action seriously. They were a tidal wave on culture at that moment, and these other titles had animals and heroism in common. There were a lot of bad platform games coming out at the time, because once the platform engine was done you could slot any character into the engine and it would largely still work. All the reason more why unique, robust characters made their debut in the early ’90s and you just don’t see as many in these 15 years since.

The humor has to be a gentleman. I mean, it needs to be squeezed in around the game.

How did your working relationship with Earthworm Jim co-designer Dave Perry work?

At Shiny, we all had our own jobs but I did end up doing full-blown game design, created level ideas, did the character’s voice; and if nobody was around, I’d answer the phones. [Dave Perry] and the other programmers and backgrounders created characters, invented game mechanics, and would even discuss what would be the best way to present energy meters, game control mechanics, etc.

Dave Perry was famous among us artists for being a programmer who cared about what artists thought. Before I worked with [Perry], usually the artist and programmers worked pretty far apart. But he loved art and artists. He listened, and I can’t emphasize that enough. It takes a level of humility to put your own power, expertise, and preferences aside to really listen. I think this put Shiny at a decidedly artistic advantage to most traditional game companies. Our teams uniquely shared information. We could have had offices with doors, and many other workplaces were about fighting over who had the bigger office; but Shiny was more like an open dorm room. It was great for communication and our games benefited from the way that company was constructed.

Dave Perry was a boss, but also a friend. We had some conflicts at the start, and that was because I had to assign the Jim rights over to Shiny before they could make the game. I feel like I got screwed on that deal, especially given I was so young and I didn’t know to go in with my own lawyer. Even today, that handshake with Perry cost me the ability to control my own character. But still, he and I got along well; he’s also 6’8”, so he’s one of the few men I could see eye to eye with. He opened up a lot of doors for me, including getting to do Earthworm Jim publicity tours. He took me to New York for the Toy Fair launch of Jim; I got to go to England, and Jim has opened every door in games and Hollywood ever since. I was exploited, but only with the best of intentions from [Perry].

Before Earthworm Jim you were on the art team for Stimpy’s Invention, BlueSky’s adaptation of John Kricfalusi’s infamous cartoon Ren & Stimpy. What was it like adapting someone else’s art, someone else’s humor, for videogames? Was it more difficult, or was it creatively fascinating?

I think it was hard to destroy [Kricfalusi’s] amazing work by making that game. In hindsight, I can only apologize, John.

So Kricfalusi did not have involvement with the game?

Nothing. I think he was on the brink of getting kicked off his own show by that point. I don’t think he had much control of the licensing of the characters back then because Nickelodeon was still figuring out how to involve creators in design decisions. I can’t imagine John K. would even be that interested in games for the Sega Genesis.

The two of you have similar styles. How did this effect the creative collaboration?

Part of why our company had me animate on that game was because I had a strong cartooning background. It was hard to do his thing back then because our technology just couldn’t handle the expressive drawing style those characters warrant.

Ben Affleck & Matt Damon’s ABC show Push, Nevada, on which you were a consulting producer, remains the biggest attempt to mix home gaming with television. What did that job teach you about TV and videogames’ ability to mix—or to not mix?

Like all games, this was just another set of limitations that existed between the game and the story. There was also a gargantuan legal department I had to negotiate to make sure the contest was fair, clear, and lawsuit-proof. I used a lot of my game-design experience to be able to create gameplay on the fly. Sometimes I had to come up with game fixes and changes within minutes of going on the air. I learned that it’s still a great medium that should be explored. In my view, it’s the natural future of television to combine the reality show with the audience.

In the last few years you’ve focused more on graphic novels than on videogames. Do you find contemporary games harder to incorporate comedy into?

Making modern games funny would be easy as pie if it was anybody’s goal to actually make a funny game. Like scratching the words “clam boobies” across your car, the tech is relatively simple. You just need to find some executive that wants you to scratch “clam boobies” into his game. And when he’s ready to blow that money I hope he calls you or me before hiring his brother-in-law to be funny.