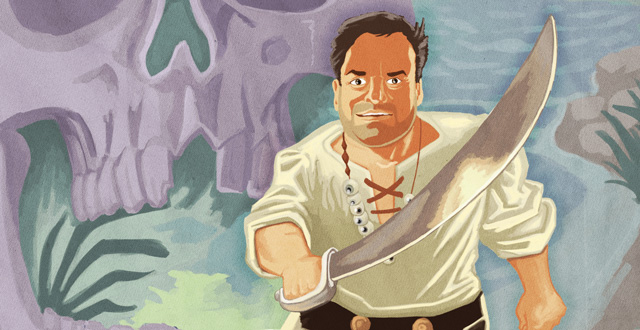 In that quiet span of years between Return of the Jedi and The Phantom Menace, LucasArts had an impact on interactive entertainment as important as George Lucas’ space opera had on movies. As the writer of early satirical titles like Maniac Mansion and The Secret of Monkey Island, Ron Gilbert explored the scary relationship between our most analytical art form—videogames—and the comedy genre, which has historically been killed by such analysis. Gilbert’s devoted his career almost exclusively to comedy, working on titles like Penny Arcade Adventures and last year’s DeathSpank, before landing among the funny videogame geniuses at Double Fine Productions.

What specific strengths do videogames have over other mediums when it comes to being funny? How can they be funny in ways that a movie or book can’t?

I think videogames actually suffer from a couple of flaws in terms of that. Comedy is really about timing, to a certain degree, and we give that up to the players, because the players are really in control of a lot of the timing of the games in what they’re doing and what they’re clicking on, and it makes setting up jokes that are based on things happening a little bit difficult.

I find the adventure games you’ve worked on more conducive to that kind of humor—where you can walk up to someone and the dialogue is presented as these back-and-forth lines that you’re reading. Your games in particular kind of preserve timing.

Yeah, the adventure games lend themselves to that kind of comedy for a couple of reasons. One, they’re very story-based, so you can really work that comedy not in a bunch of non-sequiturs, but [by] building up peoples’ characters. So in Monkey Island, it’s really Guybrush’s character. You play that game for a while and you really start to understand who he is, and then that can be used a lot in jokes because of the way he responds to things.

Do the jokes inform other parts of the game, beyond dialogue and character—like gameplay and strategy—or are they two totally separate machines?

Ideally, they work together, because the jokes should really do three different things in my mind: they should be funny, they really should help [us] understand the character in the story, and they should, at some level, help the player understand the puzzles. You know, hints for the game, giving them insight as to what’s happening. I think if you can do that in a funny way, that’s a lot better than being dry about it; and certainly in games like Monkey Island and DeathSpank we tried to do that with the humor—where when people were cracking jokes, they weren’t just cracking jokes for no reason, but they did kind of relate to what was going on and could help inform the player to some degree.

What was your inspiration for your first game, Maniac Mansion? You were working in such a young medium with no real [comedy] precedent. What were you drawing from?

I think a lot of it was that Gary [Winnick] and I both kind of liked really campy horror movies. While I think a lot of those campy horror movies were trying to be really serious, they just weren’t. And games, especially adventure games, are just very absurd, right? You’re doing completely stupid, ridiculous stuff, and if you treat that seriously, I think players question that a little bit. “Well, what am I trying to do with this bubble gum and this pencil if I’m in some serious game?” Well, if you’re in a game that’s a comedy, you can play to those strengths. Because it’s a comedy, people are going to be more accepting of that stuff.

What recent games do you feel are doing comedy very well, aside from games that you’ve worked on or that Double Fine has put out?

I have a hard time pinpointing those, but if you look at things like iPhone games—I mean, Angry Birds is certainly funny, right? But it’s funny in a slapstick way. And there are a lot of iPhone games that are funny in that weird, slapstick-y, physical comedy kind of way. But I don’t know of any that are really funny because of their writing or characters. I really don’t know. Other than the ones that Double Fine has done, or that I have done, I have a hard time coming up with one.

In the past you’ve mentioned how story can be eclipsed by technology in contemporary games. Is that something you still find to be true?

I think that a lot of games, in general, are eclipsed by technology. Not just story. We work in an industry now where people are just obsessed with technology. Publishers sell games based on how great the graphics are; or you look at L.A. Noire, half the articles are about the facial-animation technology, and we just seem to be obsessed with the technology of games. And it would be nice to get over that, because then we can get on with focusing on the game, and story, and characters, and those sorts of things.

Do you have any stories about George Lucas?

Which you can print?

We always had a little bit of this inferiority complex, because we would go to these company meetings and the different groups would present what they’d been doing for the last year. Industrial Light & Magic would go up there and they’d show all of these special effects and Academy Awards that they had won, and then Skywalker Sound would go up and show all of the Academy Awards that they had won. And then it would come to us. The games group would go up there with these horribly pixilated things…

But I think George really supported us at some level and—to his credit back then—I think he really saw what games could become. He used to tell us just three things: stay small, be the best, and don’t lose any money. That was what we lived by, and we built really interesting things because of that.

I want to talk about Penny Arcade Adventures. With your earlier adventure games, you were doing satire of “serious” genres like horror films and swashbuckling, but with that game, you were adapting characters from a comic strip that was already filled with satire. What was it like adapting source material that was already funny, as opposed to something that was not?

Oh, it was a lot easier. Because the Penny Arcade stuff is genuinely funny. It’s not faux funny; it’s actually funny. Jerry is a really good writer and he had so many situations. And the whole story, and everything about that game, was so heavily driven by them. They had come up with absolutely everything: the characters, the stories; Jerry did every single line of writing in that videogame.

So would you say your role in this project was less as a “joke writer,” and more involved with the mechanics and the design?

Yeah, and on that project I was eventually a consultant. I went down to the Penny Arcade offices a couple of times and I gave them a crash course in adventure-game design. It’s like, “Well, this is how you design an adventure game, and this is how you structure puzzles, and this is how we try to wrap story around puzzles and how we use puzzles to move the story forward.” So I spent a day just giving them that framework.

Is there any satire of adventure games in that game?

I think the game that I did next, DeathSpank, poked a lot more fun at videogames. That whole game was really a satire and a send-up of videogames in general… I created [the DeathSpank character] with an artist friend of mine. That whole character came about because he and I were looking at how ridiculous videogame characters were. They were just these really dumb, over-the-top, ridiculous things.

Did you ever imagine, when you started creating games that poked fun at other genres, that your own medium would reach the same level of ridiculousness?

Yeah, I never really thought about that, but I think it’s a great thing—because it does say that videogames have become enough of a relevant art form to the world that they can now be poked fun at.