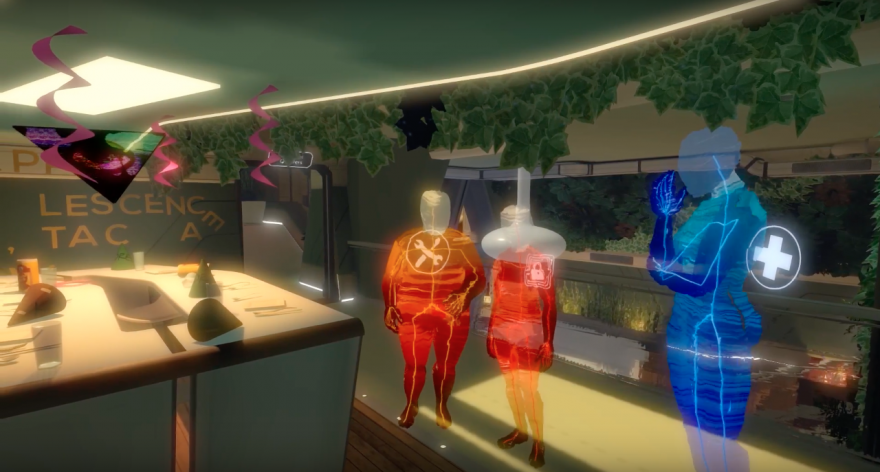 Gone Home, our favorite game of 2013, was a quiet marvel. Often slapped with the label of “walking simulator,” Gone Home was a revelatory shift in videogame storytelling in its non-standard exploration of a family via a house’s inanimate objects. Gone Home told a heartfelt coming-of-age tale about family and teenage sexuality during a time where such stories were rare in videogames. In Gone Home’s highly anticipated follow-up, Tacoma, The Fullbright Company have shifted their focus to a new venture beyond Earth itself: space.

In the newest trailer and gameplay footage for Tacoma, revealed yesterday during YouTube’s Live at E3 stream, humanity is still the focal point in the game’s narrative, just as it was in Gone Home. In Tacoma, the player, an astronaut named Amy, ventures onto an abandoned space station. While she encounters other entities, unlike the eerie quiet of Gone Home‘s mansion, they aren’t human. They’re tech-ghosts, sorta—remnants of a once lived-in past. Our protagonist must interact and watch over these ghostly beings as they interact with one another, to discover just what happened on this space station long ago.


When Tacoma was first announced at The Game Awards in 2014, it was initially hoped to be released in 2016. But through playtesting, as Fullbright co-founder Karla Zimonja explained during an interview on the livestream (alongside fellow co-founder Steve Gaynor), they discovered ways to improve the game—specifically, how it plays and resonates with the player—and thus delayed its original release window.

In Tacoma, how the player engages with the story itself differs wildly from Gone Home’s simpler approach. “We have these [Augmented Reality, or AR] characters, that are these kinds of echoes of what happened to the crew on the station,” explained Gaynor. “And it’s great to be able to spend time with them, follow them around, hear what was going on with them during these moments in their lives. But what was more important for us was how does the player have control over that?”

On the Lunar Transfer System Tacoma, AR technology has left silhouetted imprints of the station’s inhabitants. As Amy, the player has the ability to utilize the AR technology, from pausing and rewinding a conversation, to moving around in the environment to witness new things. Tacoma is giving players the ability to see a story from every angle—beyond just a single perception, as we only see in our everyday lives. While exploring the impact and implications of manipulating AR technologies in doing so.

You can observe AR ghosts and play zero gravity basketball when Tacoma releases in Spring 2017 for Linux, Mac, PC, and Xbox One.