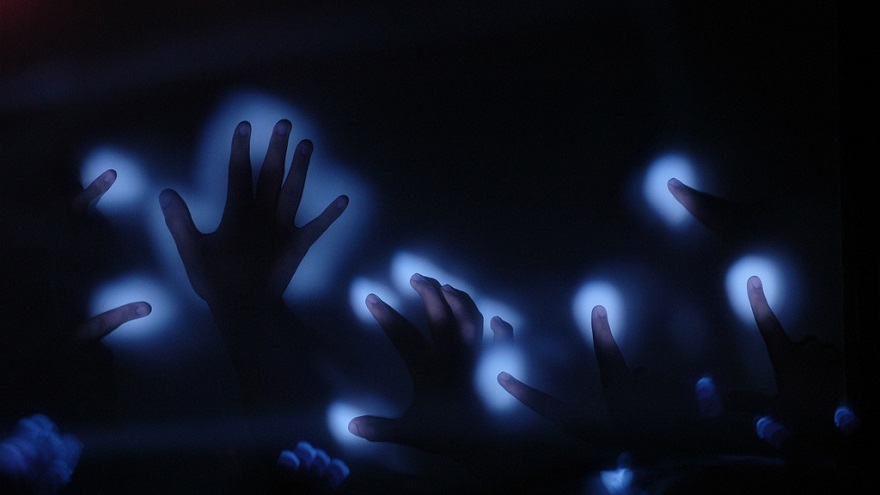 This piece was done in partnership with iQ by Intel.

“Pressing Start” will soon be a thing of the past. Our virtual journeys once began with typing in a name and pushing the requisite button. We are a busy people; such steps feel unnecessary, an antiquated notion alongside the cartridge and the price-tag. Alternatives exist. Microsoft’s Kinect camera replaces that button-press with the equivalent of eye contact, recognizing our face automatically and logging us in by sight. And now Apple has introduced the latest shortcut, a bit of whiz-bang marketing masquerading as a security feature: the iPhone 5S includes fingerprint identification. Impress upon the device those tiny rivulets of skin and, voila, you’re logged in. Now you press start every time you pick up your mobile device; the game is always on, running in the background, awaiting your return.

But once your fingers have said Open Sesame, the door opens to the same room. If I play Flappy Bird, my frantic screen-taps are the same as yours. But what if a game could take advantage of this new sensitivity? With our fingers tracing the paths to our digital destinations more often than ever, shouldn’t the uniqueness of those fingers play a role in where we end up? We asked mobile developers to consider this new, untapped input. Their answers revealed it may be harder than expected to trade on a player’s individual prints.

Michael Brough, the New Zealand-born developer known for minimalist experiments like Glitch Tank or 868-HACK, struggled to consider how a fingerprint could be used in the same way as other control innovations. “A motion controller makes sense because we move in a bunch of different ways all the time,” he wrote to me in an email, “and that gives you hooks to try to make a game out of. We don’t really do different things with our fingerprints.”

When pressed, he relented that such an interface, if it worked, could solve a nagging issue with touch devices. “It’s a classic problem with touchscreen multiplayer games that the device doesn’t know whose finger is whose,” he wrote. Any piece on the screen can be dragged around by anybody else, leading to a confused scoreboard or game-breaking griefing. But what if, down the road, a screen’s sensitivity is such that a finger is linked to a player via his or her print, the way a controller allows for discrete on-screen actions by many all at once?

Brough envisions a kind of touch-based shooting gallery. “The simplest game to exhibit this would be a kind of snap. Every few moments a circle appears somewhere on the screen. Whoever taps it first gets a point, [as] the game knows who tapped it by checking fingerprints.” Glitch Tank 2: Circle Tapper coming soon? Probably not. But Brough admits the simple idea could extend to more complicated designs eventually, if advances in ID technology allows for such precision.

What if our own identity shaped the very landscape we traversed?

The printing press was its own kind of advanced technology, allowing literature a broader reach than ever before. Cosmografik’s Type:Rider took us through this world of fonts and lettering styles, reminding us how we used to communicate with our fingers: By clutching a quill, or clacking typewriter keys. Designer Theo Le Du thinks our digits can now be more than just a blunt tool. What if our own identity shaped the very landscape we traversed?

“My idea is to create a 3D track from the fingerprint,” Le Du wrote to me. “Each is different from another, a complex labyrinth.” In the design sketch he prepared (see below), he envisions a fully-textured world as seen from within the print itself, generated from their unique pattern. Your goal is to escape the very details that define you. Simple time-waster or existential quandary? That’s up for you to decide.

Devine Lu Linvega encourages player interpretation. His game, Hiversaires, plunked you down into an alien landscape covered in artifacts and symbols. As you played, the meaning became clear organically through exploration and discovery. Linvega feels fingerprint IDs could be used to cultivate that same type of organic understanding: not in a traditional game, though, but in how we interact with each other.

In this near-future, “sharing my Twitter account handle would be as simple as touching my friend’s phone,” Linvega suggests, “and I wouldn’t have to spell out a string of letters or numbers.” Instead of replacing button-presses with fingerprints, they would stand in for other, more mundane tasks. In a way, this turns our everyday life into something approximating the virtual worlds of games, where a special object acts as the key to a door otherwise forever locked. What if each of us holds that key in our very skin? The implications are far-reaching.

What if each of us holds that key in our very skin? The implications are far-reaching.

Other ideas veer closer to traditional control methods. Linvega considers if games could “use fingerprint recognition to know the orientation of the finger.” This could detect whether the player is right- or left-handed automatically, he explains, but also could allow you “to steer a game using a fingertip rather than tilting the whole device.” Essentially, a fingertip would go from being a wide smudge on glass to a fine-tuned instrument. Perhaps here is the bridge between the nuanced control of a joystick and buttons, and the natural, though imprecise, ease of touching a screen.

Unfortunately, Apple’s privacy measures might prohibit such clever designs. At the moment, they do not allow developer’s access to the user’s Touch ID, the name given to information stored from your unique print. But once such technology is mainstream, included in every device we hold, perhaps games such as these will find the light of day and show us the true meaning of user-generated content.