Metal Gear Solid has a long standing, intimate relationship with the human body. Hideo Kojima’s near-morbid obsession has led to a vast array of characters and events that explore themes of the body in various unsettling and intimate ways. This fascination continues in Metal Gear Solid V: The Phantom Pain. Like many others, I am a Metal Gear Solid fan who was eagerly anticipating its release—but perhaps not for the same reasons. To understand why I’m hooked, I need to tell a little story first.

In 2012, I went on a university exchange program to the United States. There, through a combination of stupidity and sheer dumb luck, I fell into a concrete pit and managed to fracture my fifth lumbar vertebra. (An alternative explanation is that this was simply a birth defect that has worsened; the jury is still out on which is the actual cause, but one makes for a far more interesting story.) 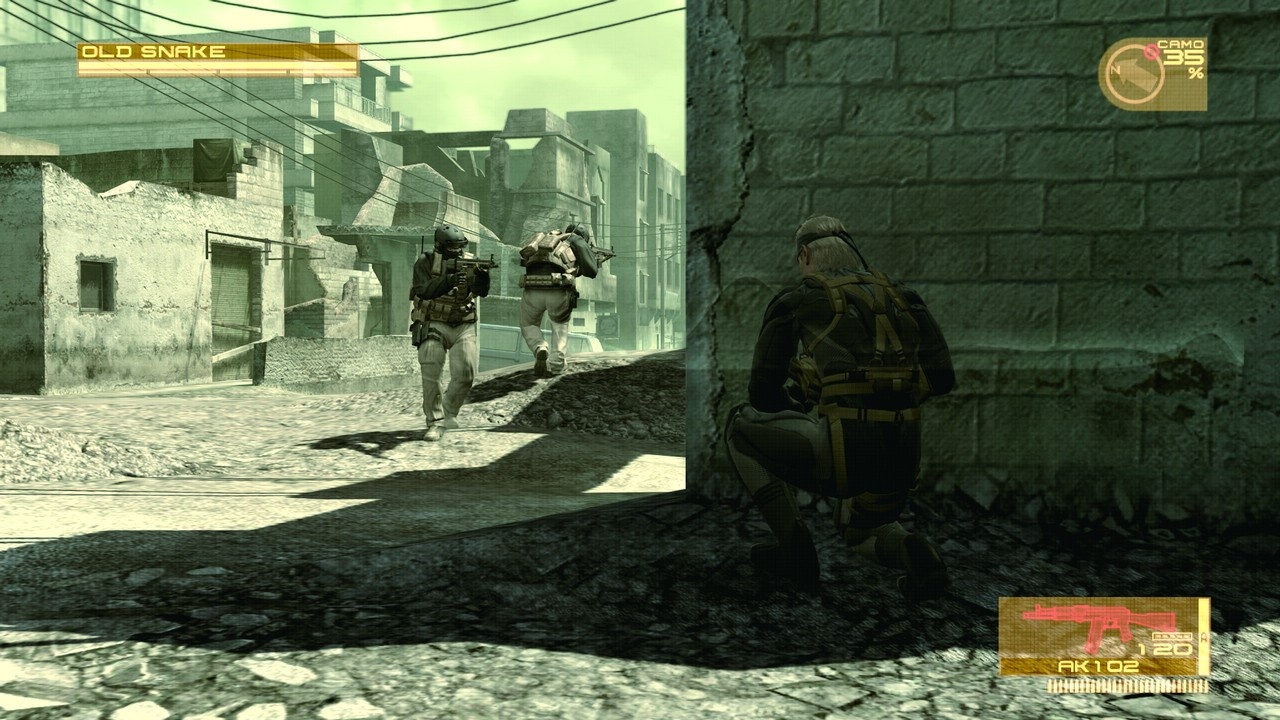 Two years later, back home in Australia, I was Old Snake, crouching behind rubble as a bipedal Gekko sauntered past. I was late to Metal Gear Solid 4: Guns of the Patriots, but making up for lost time. Moments pass as Snake and I wait for a clear opening. Suddenly, Snake rubs his aching back as his psyche drops; he’s not the spry soldier he used to be. Old Snake is, in literal terms, only in his early forties, yet his body—marked by the grey hair, aching joints, and failing organs—suggests a much older and much less healthy man. The absence of his former code name, Solid Snake, seems appropriate; this Snake is no longer solid, no longer steadfast, but is on an irreversible road to fragility.

Some months later, as my own back pain was worsening, I was reminded of Old Snake—how even something so simple as crouching for a few minutes, something he had been able to do with ease previously, was now difficult, now caused him pain. More than any videogame protagonist before him, I saw something of myself in Snake. We are connected by a shared pain.

Representation in videogames is important. This is not limited to race, gender, or sexuality: diversity of characters allows diverse people to see themselves—or parts of themselves—represented in the games they love to play. Research also supports the idea that diverse representation allows individuals to identify with characters, explore personal issues, and move beyond stereotyped understandings of different cultures, genders, and so on. My experience with Old Snake and chronic pain is but one example of this.

diversity of characters allows diverse people to see themselves

Even as Old Snake’s story seemed to be one of despair, watching him—helping him—fight on to achieve his purpose filled me with optimism about my own challenges. I spoke with Jennifer Hazel, psychiatrist and founder of Prescription Pixel, an initiative bridging the worlds of mental health and videogames. “The great thing about characters with chronic conditions is that it gives them a type of vulnerability that we can relate to,” she said.

Old Snake is a difficult character to relate to at face value. Few players of the Metal Gear Solid games are one-person armies, capable of shooting or sneaking through high-security facilities. Even fewer can identify with being a clone designed to rapidly age and decay, effectively being used as a disposable tool of war and espionage. Snake is a fictional construct, but something as simple as his bad back managed to make him seem human—and made him like me.

This is an important point for designers to remember. Not only do flawless, invulnerable characters make for less interesting stories and less satisfying gameplay, but they also undermine a videogame’s potential power to affect the player.

“By giving videogames—a place where we go to escape, to relate, to have fun, [and] that is inherently seen as a positive experience—characters with a chronic condition, it allows us to play out their stories and succeed with the understanding that they have a disadvantage. One that they can overcome, and by extension, so can we.

“It’s a wonderful analogy for humanity.”

I internalized this idea without realizing it. After experiencing Old Snake’s journey and watching him overcome the obstacles—external and internal—in his way, I started physiotherapy. Old Snake didn’t let his condition stop him from doing the things he wanted or needed to do; why should I?

Although my experience is one of optimism and positivity, this is not the broader, more typical reaction. People with disabilities—particularly the kinds of disabilities that do not manifest visibly—are often portrayed as drains on society. During my Master’s program, while attempting to find suitable work to support myself, I was repeatedly questioned and criticised for not applying for labor-intensive work—the same kind of work that was next to impossible with my pain. This lack of understanding and empathy is most obvious whenever the issue of disability support services are mentioned: detractors view people with disabilities as weak and lazy at best.

Disability is only okay if the person with the disability overcomes it. The stages before—where the person is suffering—are not laudable. Hazel explains:

“What separates acute from chronic is not severity, but length of time. If someone gets injured, chucks on a bandage and carries on shooting, we see them as a hero. If this then leads to chronic pain and disability, then society at large views that as a weakness, and we are for some reason never allowed to have weaknesses.”

Disability is only okay if the person with the disability overcomes it.

Videogames often rely on acute trauma to generate tension but overlook chronic effects. First-person shooters have dramatic firefights where being riddled with bullets requires the player to simply take cover and wait for her health to recover (or find a med pack), instead of the more realistic outcome: being incapacitated and dragged out of the battlefield by comrades, and then enduring years of physiotherapy.

This apparent distaste for weaknesses—as opposed to temporary inconveniences—is particularly odd given the general consensus that perfect characters in fiction make for terrible narratives. Weaknesses and flaws are what make a character’s journey interesting, worthwhile, and relatable—a journey without stakes is no more gripping than a journey to get steaks.

More than that, flaws are what make a character realistic. Even in fantastical worlds like Metal Gear Solid 4—with its nanobots and biomechanical robo-weapons and transplanted-arms-exhibiting-mind-control—realistic characters are necessary for making the world believable. But it’s important to remember that even in this fictitious world, Snake’s suffering is not merely an embellishment, a fragment of imagination: before the truth about Snake’s clone-status and decay-by-design was discovered, the standing theory was that he had the very rare but very real Werner Syndrome. Even though Old Snake’s condition was, in the end, a product of fantasy, the implications and symptoms are something that are still very relevant outside of videogames.

And yet this representation is no more melodramatic than is standard for Metal Gear Solid. Including chronic conditions—or any deviation from the stereotypical straight white male power-fantasy—need not require undue fanfare or neon-signposting; it can be subtle, even veiled in the fantastical, because the people to whom it means the most will notice it all the same. 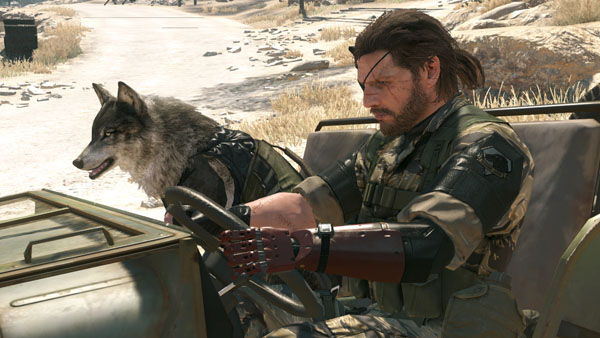 Metal Gear Solid V: The Phantom Pain continues the franchise’s trend of exploring chronic pain; the subtitle, after all, is a reference to the actual medical phenomenon of pain experienced in a missing organ or limb. This is a concept that protagonist Punished Snake (or Big Boss, or one of a dozen other code names) grows familiar with. One of the first scenes after he wakes from a nine year coma depicts him coming to grips with his missing left arm—and the pain he feels is clear and sobering.

Kazuhira Miller, Snake’s second-in-command, also suffers the loss of two limbs. After being rescued, he laments his phantom pain—both the literal pain, and the metaphoric pain of losing his men in combat. These men—the heroes of The Phantom Pain—are clearly broken and in a constant state of suffering, and yet they make small attempts to regain their autonomy and agency. One-armed and one-legged Miller still attempts to walk with the aid of a single crutch, demonstrating that, in spite of his injuries, he’s not been beaten.

While these are extreme examples, they are no doubt representative of the kinds of struggles that injured war veterans face when returning home.

flaws are what make a character realistic

Unfortunately, chronic pain as a literal concept in The Phantom Pain is largely overshadowed by its use as justification for revenge. It serves as a thematic device and adds welcome depth and richness to the characters and world. There are hints at further discussion: Snake’s smoking of ‘medicinal herbs’ is highly suggestive of medical marijuana, a common treatment for chronic pain. But for the most part, The Phantom Pain skirts past exploring chronic pain to its fullest extent.

Throughout Metal Gear Solid 4, Old Snake repeatedly denies claims that he is a hero. He claims to be nothing more than a very good killer, and perhaps that’s true. But for someone with a chronic condition, watching him soldier on during tough times—even when it hurts so bad that it seems impossible to carry on—makes him inspirational. It makes him a hero to me.

Let us hope that Punished Snake can be the same kind of hero to others.