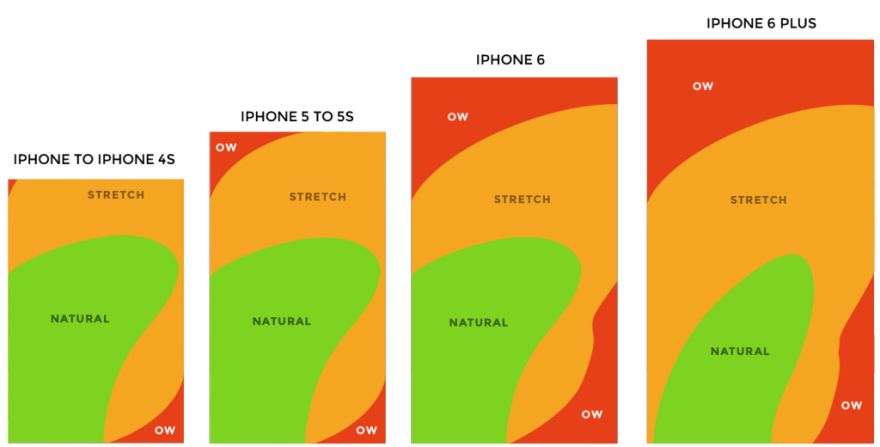 Big phones are increasingly the norm. And aside from the obvious challenges of these handheld obsidian monoliths—such as “Where do I stash this thing?”—there is a more concrete problem, an issue of design: the way you hold your (pitiful, obsolete) phone now is not going to be the way you hold one of these monster mobiles.

Consequently, the way mobile apps and games are designed will have to shift to accommodate your new iGrip. Scott Hurff at Quartz has leveraged a phone-holding survey from last year into heat maps that show the reach of your thumb on a phone of given size; assuming of course that you hold it with thumb touching screen and three fingers anchoring the back. If you hold your phone in a different, stranger way, science has yet to allow for your situation.

Hurff’s ultimate conclusion is that designers can’t treat, say, the iPhone 6 Plus as simply a Big iPhone. The phalangeal flexing required to wrangle a Plus needs to be accounted for by designing around optimal thumb range. Apple themselves have built a “Reachability” feature into iOS 8 that drops the screen down into the thumb’s Hot Zone, the area in which thumbs naturally thrive; a tacit acknowledgement that, hey, that’s a really big phone we’re selling you.

But does that really solve the problem? It’s like cropping widescreen movies for cable TV; they fit, technically, but you’re missing the point. Hurff notes that the Plus requires pinky involvement to keep steady, and notes the potential to “choke up” on the phone, though that leaves nearly a third of the screen inaccessible, meaning that at minimum $100 worth of pixel-soaked Retina Display will be obscured at any one time.

However much this complicates the simple act of holding your phone, it’s interesting to think about the way this could be a good thing for game designers. Multitouch controls become much more painless to implement, The massive landing strip of touchable screen means you could have superb vertical bullet-hell on the go. The difficulty of reaching every square pixel of the screen could even be leveraged into gameplay, hiding things beneath your “blind spots.”

With an ever-growing surplus of great mobile games at our disposal, we can at least take solace that talented, creative developers are going to do every last thing they can with these big old phones.