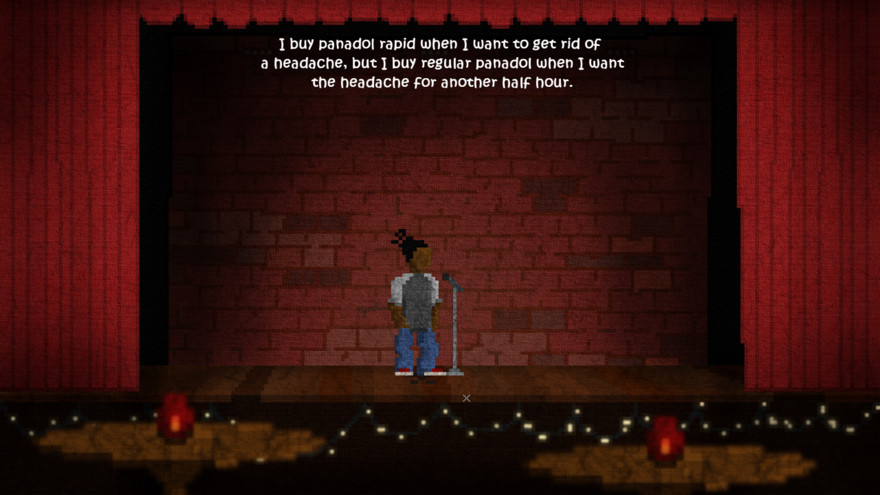 Here’s a joke for you: What did Mario say when the ground fell out from under him?

Stand-up comedy has a lot in common with games. In both cases, hours—who am I kidding, years—of obsessive work go into producing a moment of joy and entertainment. And that’s the best-case scenario; often toil and suffering are just ends unto themselves.

Leave ‘em Laughing uses game design to pull back the curtain on the experiences of stand-up comedians. The game, which is currently seeking funding on Kickstarter, would put you in the shoes of comedian Nelson Smith as he goes about his daily affairs and attempts to collect material for his routine. No matter how mundane they appear, the decisions Nelson makes affect the material he will later be able to rely upon. The stakes in day-to-day life are low but the need to turn one’s life into a popular act makes the most humdrum of decisions seem challenging.

Since Leave ‘em Laughing’s universe is procedurally generated, each of the game’s eight episodes (days) is slightly different each time one plays it. Think of it is as normcore No Man’s Sky. Seinfeld was a show about nothing where, over the course of 180 episodes, 180 different forms of nothingness took place. Similarly, the subtle differences in Leave ‘em Laughing’s episodes are meant to lead to meaningfully different jokes when Nelson takes the stage.

Once on stage, Nelson is at the mercy of audience members with different tastes and tolerances. He must deploy the material he prepared with perfect timing to get five-star reviews and avoid heckling.

As an aspiring comedian or writer, one must often choose between living a normal life in the hope that inspiration will strike or becoming a gonzo anecdote-generating machine. The former approach may produce better stories with less artifice but what if inspiration never comes? Audiences, as Leave ‘em Laughing’s scoring system makes explicit, doesn’t care if nothing happened when he went for coffee. How can this knowledge not affect the choices you make?

While Leave ‘em Laughing’s Kickstarter references Seinfeld, Curb Your Enthusiasm, and Lead Balloon as influences, a more accurate point of reference may be Girls. Lena Dunham’s Hannah regularly finds herself between the conviction that her life is intrinsically interesting and the temptation of changing everything for the sake narrative expediency. Seinfeld, though it was a comedy about a comedian, was largely uninterested in writer’s block and the temptation of contrivances. Leave ‘em Laughing promises to be a comedy adventure game but it may well turn out to be a work of existential horror.