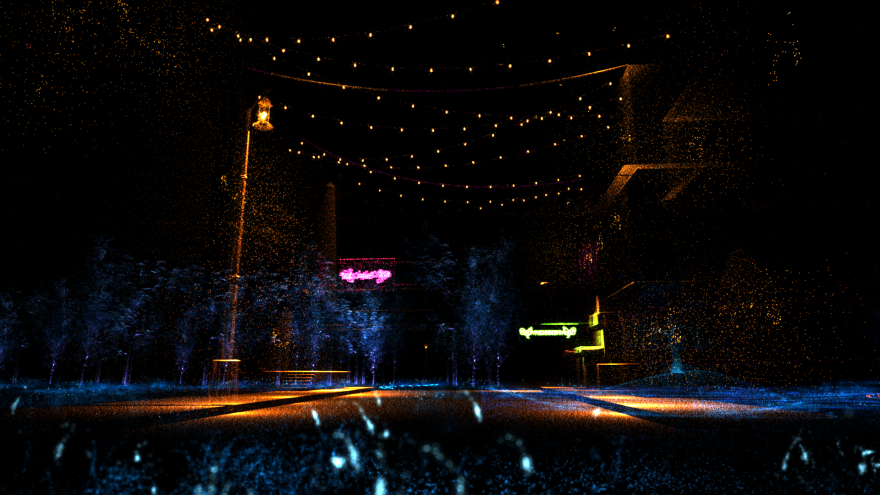 There was a hot musk that seemed to sweat over me upon marching into Earl’s Court on the third day of EGX. It was as if someone had managed to smoke box the entirety of this 41,811m2 showroom with headache and hot armpit.

Everyone else on the court’s ground floor seemed to be taken in with the radiation-green glow of the Xbox encampment and the indecipherable fan-language of the League of Legends commentary that, somehow, was audible over the volume of crowd noise. I felt like Roddy Piper in John Carpenter’s They Live when he first puts the sunglasses on to see the corporate advertisements and logos for what they really are—subliminal alien messages controlling the masses: “Obey”, “Consume”, “No Thought”, “Submit”.

I sat there completely still for about half a minute

Hurrying past it all, I focused on a sign that pointed towards “The Leftfield Collection” and made a beeline for the escalators. At the top stood a seven foot tall drag queen in high heels that could kill a person, and hair bigger than a strongman’s torso. I breathed in a big campy sigh of relief before continuing toward my destination, unknowingly (at first) following a person wearing a “Cuties Killing Video Games” t-shirt.

The Leftfield Collection at EGX doesn’t escape the rest of the convention’s dingy lighting and secreted vapors. If only it were that easy. No, it acted for me as an oxygen mask; I could run over to this artificial corridor, put a pair of headphones on and sink willingly into a non-competitive, non-violent videogame. It was the ice pack for my throbbing headache.

I’ve no idea who was standing behind me, watching as I played Jimmy Andrews’s How To Be A Tree, but they must have presumed I didn’t know how to play it at first. I’ve seen the video (below), so I knew how it was supposed to go, but when “Eye” said “How to be a tree: Do nothing,” I couldn’t think of anything more relaxing than following that instruction at the time. Amid all the competition and action of EGX, I sat there completely still for about half a minute and really did do nothing until my limbs sagged.

(Un)fortunately, How To Be A Tree isn’t supposed to be played like that. Instead, you rebel against order, abstaining from your own perfection: Eye admires the symmetry of your branches, the rigidity of your performance, but you refuse it by turning your branches into fractals, crawling and rolling across the land. As the game’s first joke only works once, the rest of it is a gymnastic showing of your freedom; you flip and uncoil ethereal patterns while being chased by branch-ripping buzzsaws, are covered in worms that need to be thrown off, and match the shape of your flexible trunk to the symbols upon ancient stones.

The most unexpected prize that EGX’s Leftfield Collection had for me was a demo of Variable State’s Lynchian crime-thriller Virginia (I previously had its creators tell me everything about it that they could). I played it twice, and watched four others play through it, the most interesting of which were two children who played it at a completely different pace than I did—it was clear that they didn’t really take it in, or know what was happening. The way Virginia tells its story in this demo is a combination of techniques used in Thirty Flights of Loving and Gone Home; that is, respectively: cuts between scenes, and examination of telltale props and environments. ‘s Jonathan Burroughs was very on point when he told me it’s like you’re “witnessing a film from an actor’s perspective.”

The interaction is found in simply witnessing the drama play out

There are a lot of match-on-action cuts to connect scenes and spaces. For these, the camera is taken out of your control so that cuts can be made to match a person’s posture, or items in your hand, between “shots” (film terms really are appropriate here). These cuts manage to weave together the bones of a plot without any dialogue or text. What truly enables this is the expressive character animations, the style of which is epitomized by the faces, which are robbed of detail except for eyebrows, beady blinking eyes, and curling mouths—all that’s needed to gesture with a face.

The body movement of your own character and others around you is the centerpiece of the game’s most heavily scripted scenes. In these, you are required to perform just a single click and watch as the drama unfolds around you. So, yes, there’s not a lot of physical interaction to perform at times, but I didn’t feel robbed of agency. I think this is due to being very conscious of seeing the scene from someone else’s perspective (you can look down and see their body), and that ‘s crafting hand is so visible through the cuts and mise-en-scéne. The interaction is found in simply witnessing the drama play out, and then tying together details and actions in one scene to another. You’re picking up on body gestures, signals, the layout of props around the scene; all of it giving you a feel of relationships between characters, what people are thinking, the world slowly making sense.

These “witnessing” scenes made up about half of the demo, maybe a little less, while the others give you the freedom to wander, and to be as investigative of, say, a crime scene as an FBI agent should be. In the demo’s strongest scene, you enter a house, walking past a number of policemen, toward a weeping woman and a comforting vicar, while your partner attempts to speak to them. You learn the relevancy of these two new characters by looking at the family portrait placed in plain sight right behind them; you instantly know that they are the parents of the missing boy you’re investigating.

two young girls watched over by their mother as they created strange little videogame worlds.

Another effective filmic technique used is the flashback. It’s used right at the end of the demo to reveal how you got hold of an item in your pocket (from another scene that you were cut away from before) while sucking on a bottle of beer later that night at a quiet bar—the kind of place that you would reflect upon the day’s activities. Not all of the scenes and cuts in ‘s demo felt necessary, but the majority of them proved that is pushing what film making’s “cut” can do for storytelling in videogames in a positive direction.

At the opposite end of the Leftfield Collection corridor I found my most therapeutic piece of software. Mark Wonnacott’s Kool Tool Game Maker is a work-in-progress, and is consequently very basic right now, but within a few playful minutes I was able to compose a bizarre little adventure game. Its strongest feature is the Microsoft Paint-like interface. You scrappily pencil in colors inside tiles to create 2D walls and floors; expressive and often garish visuals. Then you drag and drop characters in, give them a shape and face, and then type in their dialogue, which is spewed out when you bump into them.

The most heartening sight of the day was that of two young girls watched over by their mother as they created strange little videogame worlds. Kool Tool is excellent for fast production of what ends up looking like the digital age’s upgrade of a child’s messy drawing proudly pinned up on the fridge door. The two girls became excited to the point that they had to stop every 30 seconds to explain to their mother what they had created with pointing fingers and huge grins. It was pink castles for kingdoms of melon people, apparently.

My penchant for animated physical materials was fed

There were other games in the Leftfield Collection that deserve equal celebration, including the beautiful, if under developed at this point, puzzle-exploration game A Light to the Chorus. Its world is entirely portrayed by light particles, with forest scenes and carnivals blending into one another. The team behind it reckon they’re about 18 months away from it being finished, as they’re still trying to work out what you do in the game—currently, it’s wandering around and altering a few of the luminous objects—so for now it’s all spectacle, which is no bad thing, really. Opposite that game, and attracting small queues, was the the mouse-only physics-based Mushroom 11. It is strange, peculiarly tactile, sometimes gross feeling but always highly mesmerizing (you really need to see it being played, or play it yourself). It involves destroying a fungi that rapidly regenerates in order to move it through a desolate world.

There was also Niall Moody’s abstract roguelike [encrypted] that seemed so tightly coiled that it was impenetrable (deliberately so), at least, it was when played fleetingly on a very loud show floor. What was immediately impacting, however, was the game’s audio design, which roared with intensity at every move, every explosion, and every death. Low-poly graphical adventure “about a woman in the midst of an existential crisis,” Toryansé, had the same problem as [encrypted] in that it seemed too obtuse, too hard to work out for a show floor, as invitingly mysterious as it was.

While it wasn’t part of the Leftfield Collection, but was in arm’s reach of it, point-and-click adventure made out of real models Lumino City had a demo that had me gripped and delighted for an entire hour. That, by the way, ended up being one of the most pleasing hours I’ve devoted to the genre in years, with the exception of Amanita Design’s Botanicula. My penchant for animated physical materials was fed: I visited simple people living inside cute cliffside cardboard cut-out homes, developed photographs inside a camera on its end turned into a photographer’s home, and solved a cog puzzle and another that involved spinning a marketplace made out of colored paper.

Almost instinctively, I compared Lumino City‘s tiny models (that creator State of Play had actually brought along to show) with the makeshift shelters I looked down upon from the edge of Earl Court’s first floor, these were the booths that housed Call of Duty: Advanced Warfare, League of Legends, Battlefield Hardline, Dead Island 2, and the industry’s other big hitters. One set of miniature models (they were from where I was stood) was a headache rattling around a biscuit tin, attracting two hour-long queues, shouting, and fist-bumping. The other set acted as a remedy that I could pull over my ears and set my eyes upon, losing myself inside a little wonderland that only wanted to incite a childlike joy in me.