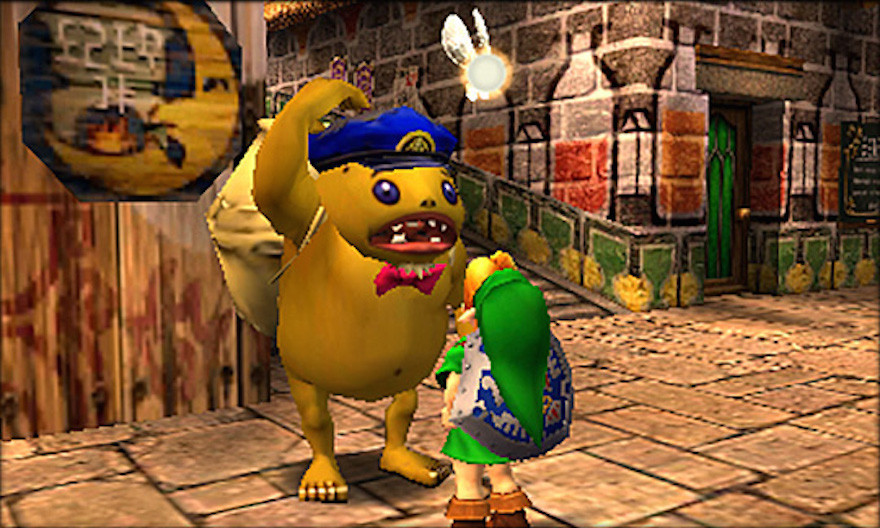 Majora’s Mask is a pressure cooker. Time always works against you, and you’re required to go back to the past to acknowledge your failures and hope you succeed this time around. We know how to do this from games like Prince of Persia: The Sands of Time and Braid. Those games put personal stakes on the line: your own survival, the integrity of your memories. Majora’s Mask takes the critique that rewinding affords to an environmental level, making it the smartest cultural critique of any game in the Zelda series. It does this in two ways.

First, Majora’s Mask cuts against our traditional notions of heroism in games. It’s not the leisurely stroll through Hyrule Field that Ocarina of Time was. In the game, you live with several constant reminders of your imminent death: the game clock, which doles out opportunities to save the world in three-day chunks; the screen, which crushes your world down into a claustrophobic box once every twelve hours; and the nightmarish moon inching ever closer to Clock Town, wielding the kind of narrative power reserved for Death Stars and Strangelove-esque Doomsday Machines: all-powerful, omnipresent, and always a hair’s breadth from going off.

But these stakes aren’t what makes Majora’s Mask an unusual Zelda game. It would hardly be a hero’s journey if the fate of a kingdom (if not the world) weren’t hanging in the balance. But the threats you’re fighting against the entire world are usually abstract. You have a vague sense that if the bad guy has his way, it’ll be The Worst. “Vague” is the keyword there. A princess’s life gets threatened as a synecdoche for the rest of humanity, but any existential threat beyond that is bound up in some unknowable-yet-huge power the villain will get if you don’t intervene. And that’s key: You, the hero, always arrive before the point of no return. You can still stop them. You can still save the world. After all, why would you play a game where the ending’s already set?

Majora’s Mask operates on a different assumption: the world is already fucked. By the time you get to Clock Town, looking for your chatty fairy Navi, it’s already too late. The moon—massive, growing, and wearing a manic Lynchian smile—will destroy the world in 72 hours. The mask salesman knows it, the mayor knows it, the townsfolk know it, you know it. Decisions that were made before you ever got here already ran their course, and now there’s this ominous force of nature lurking overhead. You can’t persuade it not to; you can’t beat it. The moon just takes its time marching toward your inexorable demise.

This is what makes releasing Majora’s Mask in 2015 better than when it originally came out: It’s almost too real. In 2000, the monotone narrative of late capitalist progress didn’t have an end in sight.  There were Furbies and an election and a booming economy and you probably had dial-up. Halcyon days. Now, the end is in sight. Even if you read the moon in Majora’s Mask as a macguffin in 2000, it’s impossible not to see it differently today. That moon isn’t just another Death Star; it’s climate change. It’s the beginning of nature’s slow march back to a time before we got here, courtesy of mankind. Driven by Skull Kid’s blind self-interest, the moon will destroy the human institutions that set it on that path.

What makes Majora’s Mask such a prescient critique of climate change is that it shows how lost our cause is at the level of its mechanics. In Ocarina of Time, you had to travel to the future in order to see how bad things got. But in Majora’s Mask, you have to go back to try to unmake mistakes and redraw the shape of history. The message is clear: You were born too late. This cuts to the bone when you remember that we don’t have a Song of Time to help us rethink the last 75 years of relentless progress. Today, Majora’s Mask reads as a wistful “what-if,” a power fantasy not at the level of the individual but of society as a whole.

The message is clear: You were born too late

The mask mechanic reinforces this social element. You have to put on and remove various masks to take on different roles in society and the world, playing others’ parts as you keep rolling back time, looking for a way out.

Even the world’s name reinforces Majora’s Mask’s apocalyptic mood: Termina. The four environments in Termina also correspond to real-world climates that have been overrun by the same evil force drawing the moon toward the planet and its destruction. By freeing the environments from their curses, you reawaken these ancient giants that represent each environment, symbols of a pre-anthropocene world who can stop the moon if they all work together. But of course the central problem is time: it usually takes all the time you have left to complete an area and awaken a giant, at which point you have to turn the clock back again. While the various areas’ giants remain awakened through this time travel and your progress can be saved (a process that the game admittedly doesn’t do a great job explaining), the takeaway is clear: There’s no time left. 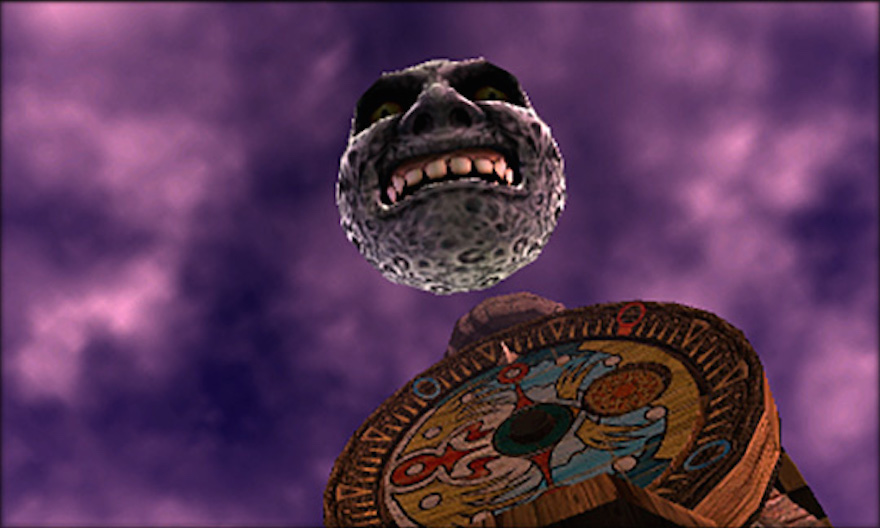 To call Majora’s Mask prophetic would be false. Scientists have been concerned about climate change since at least the 1980s, and no one actually thought that all the detritus of global capitalism—the mountains of clamshell packaging and disposable diapers and freon-infused refrigerators—was doing the Earth any good. But it’s only been in the last few years that we’ve really seen our own moon start to loom overhead, looking down with that twisted, toothy grin. And if Majora’s Mask wants us to learn anything, it’s that by the time you can see the moon, it’s already too late.