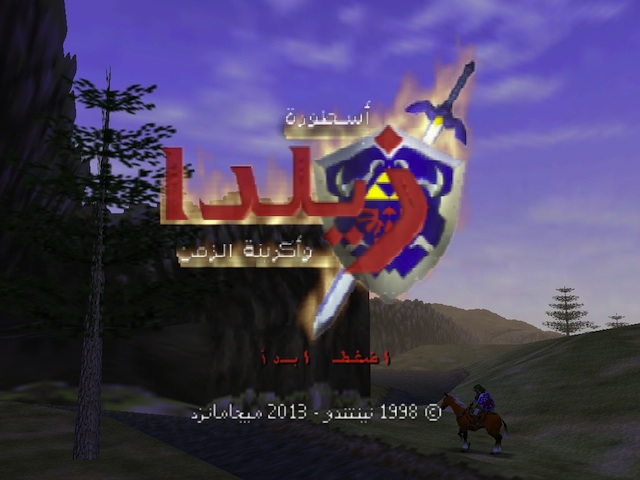 Early last week, The Legend of Zelda: Ocarina of Time was rereleased in Arabic by a group of Arab fans, almost fifteen years after college freshmen were wowed by a horse named Epona. The honcho behind the operation is Mouhssine Zaouia (alias, MegamanZ), a 27-year-old fan-translator from Casablanca. Mouhssine looks like a mischievous, plus-sized Tingle, and when we talked, he frequently called me “bro.”

His other bros, the ones in his translation group, known as Extraordinary Team, hail from around the Arabic globe, in locales as remote as Saudi Arabia, Egypt, Palestine, Kuwait, Syria, Tunisia, and Algeria. They have artfully translated over sixty games into their calligraphic language, but none shinier than Ocarina.

For the past three years, Mouhssine and his team have been translating the game which he and a lot of other people agree is the greatest game. Period. After modifying the GameBoy Advance’s The Legend of Zelda: Link’s Awakening, he wanted to work on a “real game.” (In the Arabic gaming world, “real game” means hardcore.) So he thought to himself: Why not shoot for the stars? Though he started on Ocarina alone, he soon found the work too demanding. So, he called on his crew, surprising them with good news: the story of a boy with a magic flute who saves a kingdom would be rewritten.

The first fan translations grew out of necessity. In the early ‘90s, role-playing series from Japan, such as Square’s Final Fantasy, developed a zealous audience in the West. However, for sound business reasons, plenty of these games weren’t released outside Japan. The only way gaijin had access to those unlocalized gems was to import and rough it out with a Japanese-English dictionary. So, a plucky group of occidental fans, united under the banner of the internet, would rip a copy to their hard drive, hack the text file, translate it into English, and distribute it for free.

Contrarily, Mouhssine and his Extraordinary Team had no practical reason to translate Ocarina. Pretty much everyone who speaks Arabic knows enough English to understand the game’s simplistic writing, and the game was popular in Near Eastern countries a long time ago. So why did they do it? One justification is simply pride. “We want to play our favorite games in our mother language,” Mouhssine says. Another, better, reason is that he considers his work to be poetic, the same way Edward FitzGerald considered his translations of The Rubáiyát to be.

“Ocarina is more like poetry now,” Mouhssine assures me. “I use the style of a poet.” When you think about this from a Western perspective, it sounds iffy. But when you consider the stylistic nature of Arabic writing — how the ligatures of the cursive script can loop expressively, how the stretching lateral marks (known as kashida) imbue an aesthetic, how a calligrapher can adorn a letter with delicate brush marks, and how a single word can be written a multiplicity of ways yet retain the same meaning — it makes sense. “Arabic is an artistic language,” he says.

For the most part, the subtleties of the font are impossible for the untrained eye to see (How are you supposed to apprecite nuances if you don’t know Arabic in the first place?), but at times Mouhssine’s embellishments really pop. This is true especially of Ocarina’s ending, which Mouhssine says is “romantic.” In the English version, when the spirit sages appear to vanquish Ganondorf into the abyss, we get two lines of prose:

Ancient Creators of Hyrule! Now, open the sealed door and send the evil incarnation of darkness into the void of the Evil Realm!!

Mouhssine didn’t care for that, so he translated the French version instead, and positioned it as poetry.

Which, when translated back into English, says:

and close them on the symbol of evil.

Send him to the kingdom of oblivion.

It’s nice enough, though I suspect plenty was lost, found, and lost again in the iterations. For Mouhssine, who says that less than one percent of the script is artistic license, it’s not about the meaning of the words, but the way they are presented. “It’s Nintendo’s history, not my history,” he says. And he’s right. His history is ancient, tracing back through centuries of scripts of Islamic calligraphy to a time when they say archangel Gabriel, in a radiant nimbus, first revealed the abstract, tangly, impressionistic, eloquent letters.