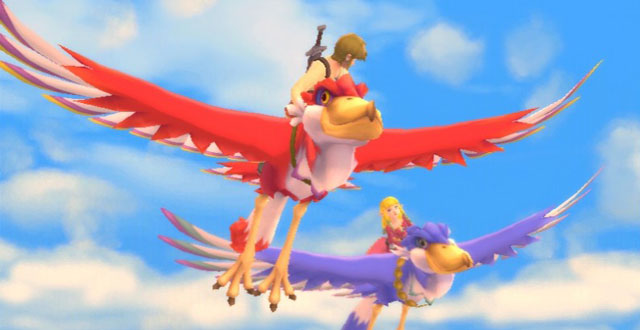 Telling lies to children is one of the longest-running traditions in human history. Every culture has its own way of teasing the untempered edges of a child’s imagination with tooth fairies, Santa Clauses, and mermaids who learned to walk on two feet. Grown-ups are often nostalgic about their own coercive first encounters with true-seeming non-sense. Even as we learn to distinguish fact from lie we look forward to luxuriating our young in the same sentimental confusion between the two. The Legend of Zelda: Skyward Sword is an embodiment of this tradition in both mechanic and style, a romance with haphazard mythologies and the superstitious trinkets that keep them bound together.

Skyward Sword is about a child who leaves home to save a friend and, in the process, becomes a heroic adult for whom returning to the dreamy childhood room in which we first find him is impossible. It’s a bizarre but digestible myth that leaves a comforting warmth in its wake. The game progresses concentrically, sending Link this way and that to uncover secret paths, hidden doors, and buried treasure, before finally understanding the biggest secret—I’m a hero!—was inside himself.

It’s a vertiginous thought: to imagine we possess secrets unknown even to ourselves. The opposite has been truer in my experience. As each expired year recedes into the closing iris of time behind me, I’ve felt a remarkable sameness connecting moments of childhood wonder with the sagging wrinkles of thought I rediscover at the end of each grown-up day. How can it be, after all of this, that I remain the same? How can it be that I have not yet discovered the hidden purpose and clarifying explanation of my own life?

That question is the thesis, and Skyward Sword is its swooning antithesis. No, no, no, it says, you do in fact change; you will wind up different; and yes, yes, yes, you will become greater than you are today.

In the language of rules and systems, this is accomplished by incrementally piling changes onto Link, changing his clothes, bejeweling his ears, and revealing tools that change his physical abilities and further unwind the clockwork puzzles of the game world. This structure is  a classical one reaching back into the tabletop days of Dungeon Masters and text adventures, where simple systemic problems were given metaphoric overlays that turned Object A and Obstacle B into dramatis personae. In Skyward Sword Nintendo uses it in the same way Disney used Orff and Stravinsky in Fantasia, favoring the affects of wonderment over the intellectual consideration of ideas. Is there anything more mimetic of childhood than this, a conception of the world built around its ability to produce delight?

There’s nothing especially special about switches, save the way we can lust for them when they’re moved just out of reach.

The mechanisms of delight in Skyward Sword are motional, an aggregation of the most durable control ideas that have emerged from the Wii Remote. In the best cases, these feel obvious—tilting the controller to steer a flying mechanical beetle that Link can launch from his wrist. The tilting idea appears and reappears: steering Link’s bird through the white open sky—the series’ first literal overworld—and later being used to guide Link as he swims underwater.

The same gesture is also used to control the aiming reticule of slingshot, clawshot and gust bellow, and during the first-person “dowsing” sequences, where you use your sword as a pointing device that beeps more urgently as you get closer to a secret. Instead of using the Remote’s infrared pointer, Skyward Sword gets close to the same accuracy and sensitivity by interpreting gyroscopic tilt, which adds an extra layer of physicality stemming more from the elbow and shoulder than the wrist. Each of these uses could be made to work with button-based controllers, but the tilting motion de-emphasizes the end for the pleasure of the means. The importance of the switch on the other side of the room that is to be hit matters less than the joyful journey of the trinket toward it. The secret is, after all, only a switch. There’s nothing especially special about switches, save the way we can lust for them when they’re moved just out of reach.

Skyward Sword’s focus on re-traversing areas makes this quality especially apparent. On first pass the Faron Woods—the first glimpse into the world beneath the sky—seems swollen with secrets. One early section has a Goddess Cube stuck atop a giant tree root, with a conspicuous target plate hung in the leaves beside it. But the Cubes are nothing more than switches that unseal treasure chests in the sky above, yielding 100 Rupees or a piece of flint that can be used as an ingredient for a minor item upgrade. The item you’ll need to get that Cube is still 15 hours of gameplay away. One begins to yearn more for the gear work of the secrets and how they’ve been arranged around the world, rather than the cheap junk they’ve been built to hide.

The gears are also essentially broken. All of the instances of using the gyroscope to aim require a fix-it button (down on the d-pad) to recenter the cursor when the gyroscope’s mathematic interpreter loses track of where the player is in space. Sometimes the fix happens subconsciously after one too many seat adjustments or nose itches. In other cases, moving the Remote too quickly or with too extreme an angle overwhelms the gyroscope and sends the cursor fleeing off-screen. And even when played with perfect form, the gyroscope will tug at the leash with increasing erraticism, requiring periodic recalibration.

Blaming a game for its gyroscope is like blaming a novel for its typeset. Yet, with Skyward Sword these interruptions add an interesting, if unintended, subtext to each action, adding an irrational difficulty and frustration to movements that are otherwise poetically simple. Continuing to play with them is a physical suspension of disbelief, a repeated act of faith that the puzzles will yield something worth the effort, or the story will light up some yet-unrevealed insight that we might walk back to ourselves. The insights never really arrive, but the moments when one feels on the cusp of some new discovery are precious enough. The broken controls don’t impede the game’s core beauty: they add a wild variability to the idea of trying to master strange new machinery again and again. It could have been even more powerful had Nintendo actually designed for this unreliability, a game design equivalent of cinéma vérité’s handheld camera, but for now it’s worth noting only as a promising curiosity, a secret item waiting to be discovered in its treasure chest.

It’s all perfectly linear and direct, and yet preposterous at the same time. Skyward Sword is an initiation rite into our ability to simultaneously make perfect sense and be cryptically incoherent.

The titular mechanic in Skyward Sword is its least interesting and, ironically, its most reliable. The Wii Remote’s gyroscope allows for the height and angle of Link’s sword to change in a continuous and minute way while unsheathed. The single-gesture accelerometers turn that wealth of spatial data into a handful of discrete sword swings. Moblins, Piranha Plants, Stalfoses and Lizalfoses all tell you the same basic thing with their animations: Swing horizontally, vertically, or diagonally now. It’s a simple system that lacks any meaningful development until the very end of the game. The climactic fight against an armored beastman with flame-red hair who is not called “Gannon” features weapon degradation, the use of shoves, feints and misdirection, and a heavy emphasis on timing shield blocks. It makes the preceding 30 hours of swordplay feel like a tutorial that is so long you grow numb to it.

This sense of being trapped in a pedagogic exercise is inseparable from the core meaning of Zelda. Skyward Sword is a learning simulator, a near-perfect progression of object lessons—physical and logical—that revive in adults the forgotten sense of amazement in learning, while remaining uncomplicated enough to engender a sense of grown-up mastery in younger players. This trick cannot be completed without the invention of a latticework of dishonesty so imaginative it veers into the supernatural. It is a world where dragons can send you underwater to collect dozens of fish shaped like musical notes and where playing a harp causes glowing cryptograms to shine through your skin.

In Tractatus Logico-Philosophicus Ludwig Wittgenstein defined the “mystical” as things that cannot be put into words, inhabitants of an order of existence outside of our own universe, incapable of being described or understood by our rational brains. Skyward Sword imagines singing dragons, glowing tattoos, and an hereditary struggle between good and evil in which some village kid will always wind up the green tunic’d hero and a blonde-haired royal is kidnapped in perpetuity.

It’s a game where logical thought mutates into dreamy mysticism, simultaneously lucid and absurd. When Zelda is possessed by the spirit of the Goddess and entombed in a floating glob of amber, you must learn to play a song on a harp and collect three golden triangles to get her out of it again. When a giant drawbridge door is locked, you must find a tool to unjam the gears that keep its chains in place. It’s all perfectly linear and direct, and yet preposterous at the same time. Skyward Sword is an initiation rite into our ability to simultaneously make perfect sense and be cryptically incoherent. It is the synthesis of our brains’ fixation on linear logic and its antithetical eagerness to swoon in a cloud of superstitions projected onto heavens above us.