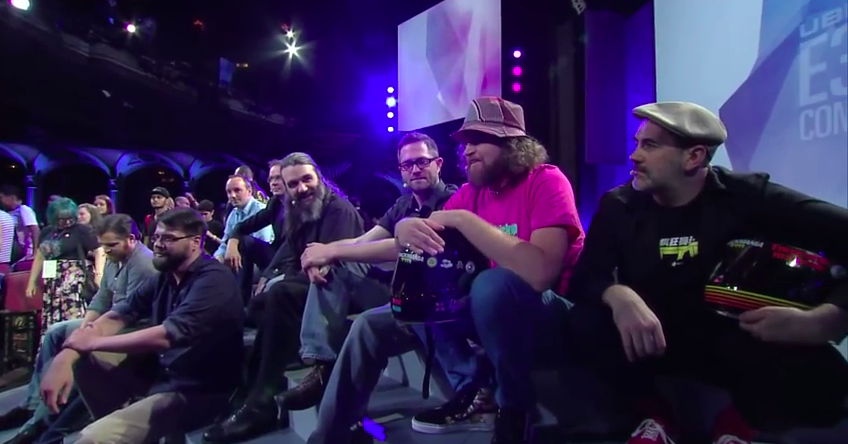 We live in a glorious time for mediocre fashion. A CEO wears 501 jeans and a black turtleneck and magazines seriously discuss whether he is a fashion icon. Mark Zuckerberg’s t-shirt and hoodie routine is greeted by apparently serious articles about fashion and the psychology of “decision fatigue” amongst leaders. There’s now a name for dressing like you know you’re not standing out: normcore. There’s also now a name for the body hiding beneath the GAP-sourced exterior of normcore dudes: Dadbod. (Note that these phenomena, with the possible exception of normcore, apply primarily to white dudes: Fashion may change by the season but social structures sure as hell don’t.)

Seeing as inventiveness or the slightest pretense of aesthetic appeal are no longer necessary preconditions for a fashion thinkpiece, let us now turn our attention to the menswear on display at E3.

Here, for your viewing pleasure, is Martin Sahlin, the creative director of Sweden’s Coldwood Interactive and presenter for EA’s Unravel:

Martin Sahlin’s clothes fit, which is a good start. There is no drooping fabric to distort his form. Sahlin’s outfit is fitted, but not tight. It suggests a basic level of competence without drawing attention to themselves. Unravel, incidentally, is about a character made of woollen yarn. While most clothes are made of some form of yarn, Sahlin’s outfit—particularly the jeans and jacket—is on the crisp side of the spectrum (denim, waxed cotton) compared to Unravel‘s textured protagonist. SCORE: 8/10 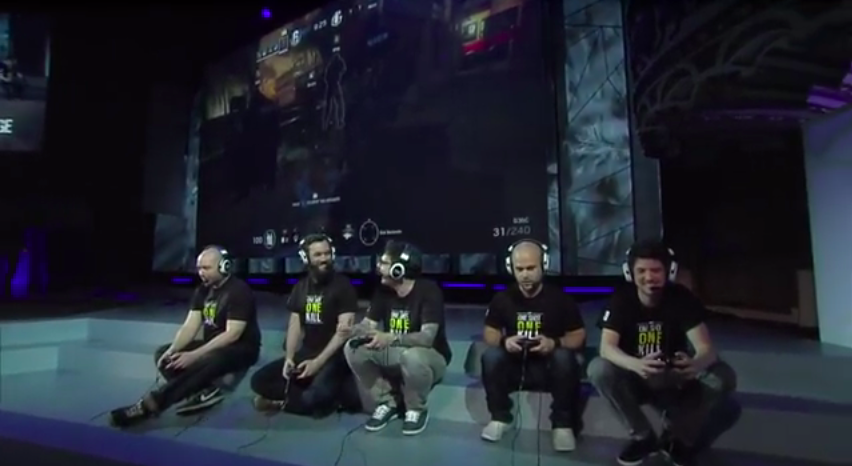 “Dudes,” you might want to tell these dudes, “you are doing nothing, zilch, nada to dispel the mental image my acquaintances have of videogame enthusiasts.” Resist the temptation. This fivesome accomplished an important public service. Their identical t-shirts, which mercifully do not have baggy sleeves, allow us to focus on the subtle differences jeans and shoes can make. It’s like a human a/b test!

The overwhelming consensus on this panel is that one’s jeans ought contrast with one’s shoes. Thus, two of the three men in dark jeans have grey shoes and the two men in light jeans are wearing black shoes. Even the lone holdout (far left) has the cuffs on his jeans rolled, which provides a similar contrast. Having made the hipster choice and rolled up the cuffs of his jeans, that dude is now sitting alone whereas his companions have paired off into dyads.

All of the choices here are passable, though the contrast between shoes and jeans only serves to make the players’ legs look shorter. This contrast also highlights how many of the jeans on display are slightly too long and bunch up at the ankles. Even though he’s all alone, the monochrome dude with cuffed jeans is the pick of the bunch. SCORE: 4/10

“Fellas,” writes Mashable‘s Emily Siegel, “you can’t make it to CEO in your pajamas — unless you’re Mark Zuckerberg, that is.” Credit therefore goes out to EA’s CEO who dressed like he meant business. Andrew Wilson may have taken fashion tips from Thomas Gabriel, Timothy Olyphant’s monochrome villain in Live Free or Die Hard, but Thomas Gabriel meant business too, so that’s okay. Others have noted Wilson’s similarity to another villain:

The shiny lapels, though a little played out, save this outfit from being altogether too black. Moreover, while one might not want to be seen as a villain, they usually dress well. Embrace it. SCORE: 7/10

Note the Assassin’s Creed logo on his t-shirt. He’s up here promoting Assassin’s Creed, get it? This attempt at brand messaging is one of the only reasons why one might ever unbutton a jacket while standing, but it does have the unfortunate side-effect of generating an unflattering shape. SCORE: 4/10

And now, a representative image from the Xbox session:

There is a t-shirt under that jacket. There is something on that t-shirt, but what? Judging from the small portion that is visible, the pattern is too large for this to be a novelty shirt. The gradient on the black background looks somewhat like beer, but surely that isn’t the case. If you, dear reader, have the answer to this question, please let us know.

More broadly, if an outfit can’t be good, it might as well be interesting. So it is with this getup, which is profoundly uninspiring, yet kept our interest due to the mystery of the t-shirt. This is proof that sometimes it’s best to hint at potentiality—even if it’s not there. (Decide for yourself whether this is a metaphor for E3) SCORE: 5/10

But what does this all mean???

Male presenters at E3 make a variety of sartorial choices, but all dress as if they were on first dates. There are recognizable archetypes—blazer and t-shirt; formalwear without a tie; hipster chic; one courageous pop of colour—that you are likely to find at a bar or in a second-tier mens magazine, like the short-lived Player, circa 2006. This, in its own way, is fitting: E3 is speed dating for videogames. You meet lots of videogames, decide if they’re worth a further look, and can house-train the game later.

E3 fashion prioritizes competence over excitement. The presenters’ clothes fit in a very traditional sense. There is no experimentation with form or distortion of shapes. The colours don’t clash, in large part because there are very few colours to clash. Everything works, which, in its own way, is a little boring. E3 menswear, with the exception of Tommy François, lacks an anarchic verve. Where’s the risk? Where’s the excitement? Nowhere is E3’s soul-crushing professionalism more apparent than in the menswear on display.